Forums:
Email this Topic • Print this Page
Reply Tue 22 Oct, 2019 10:02 am
Today our state lesgislature is debating whether the use of word "bitch" in a derogatory manner should be punishable with up to 6 months in jail.

I think it is ridiculous that censoring a word is even being considered. If these bitches pass this bill, I would love to be the test case.

An Act regarding the use of offensive words

Section 53 of chapter 272 of the General Laws, as appearing in the 2016 Official Edition, is hereby amended by adding the following subsection:-

(c) A person who uses the word “bitch” directed at another person to accost, annoy, degrade or demean the other person shall be considered to be a disorderly person in violation of this section, and shall be subject to the penalties provided in subsections (a) and (b). A violation of this subsection may be reported by the person to whom the offensive language was directed at or by any witness to such incident.

The information contained in this website is for general information purposes only. The General Court provides this information as a public service and while we endeavor to keep the data accurate and current to the best of our ability, we make no representations or warranties of any kind, express or implied, about the completeness, accuracy, reliability, suitability or availability with respect to the website or the information contained on the website for any purpose. Any reliance you place on such information is therefore strictly at your own risk.

So? It seems legitimate, though I suspect it will not get past the committee (and it is a complete waste of time to get this far). 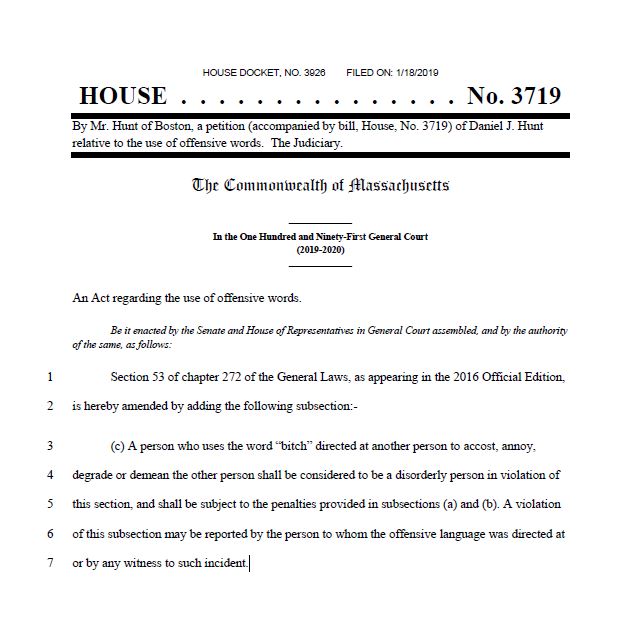 I assume that by "legitimate" you mean my post is legitimate since such a bill is actually being considered. Hopefully you don't think censoring words under penalty of law is legitimate.

I assume that by "legitimate" you mean my post is legitimate since such a bill is actually being considered. Hopefully you don't think censoring words under penalty of law is legitimate.

I don't think this waste-of-time bill is legitimate. I think it's a suck-up congress person, who's kissing the ass of a big donor white female constituent (who should be shown the door and a proper speech on how to not waste Mass legislature's time on obviously unconstutional bills).

This needn't be a slam against progressives but against bad legislators and bad faith lawmakers.
0 Replies
2
Reply Tue 22 Oct, 2019 01:38 pm
Actually this has been a big item on the radio this morning and all day.

It is in Boston.com as well and yes according to the bill you could spend 6 months in jail.

Way to go Mass for spending our tax money so wisely.

Now I can understand that it isn't a nice thing to say, but really making it illegal? I think there is money and time spent elsewhere.

A Boston Democrat has proposed a state law that would penalize the use of the b-word when used to demean another person.

The bill, filed by state Rep. Dan Hunt in May, is slated to go before the Joint Committee on the Judiciary Tuesday afternoon.

The measure proposes adding two sentences to the section of state law that assigns fines and other penalties for various offenses, such as crimes for common night walkers, indecent exposure, and disturbers of the peace.

“A person who uses the word ‘bitch’ directed at another person to accost, annoy, degrade or demean the other person shall be considered to be a disorderly person in violation of this section,” the bill says.

According to the bill, penalties would be similar to those outlined in the other subsections of the state law, which, depending on the subsection, provide for a fine of not more than either $150 or $200, or jail time of up to six months,

But I do see someone else posted the bill -

Not sure where Boston.com got the details of the fine and potential jail sentence - I am assuming it was brought up today as that is the date is it scheduled to be discussed.
0 Replies
1
Reply Tue 22 Oct, 2019 02:13 pm
This would be quite harsh towards the musical careers of Elton John and Meredith Brooks (and many more), as well as literary careers.

The Bitch Is Back, Elton John

"that bitch just peed on the carpet again"

What a coincidence. I just made a post about peeing on feminists' furniture and upholstery somewhere else on the internet. Then I came here and saw this post.