Random News from the Rest of the World 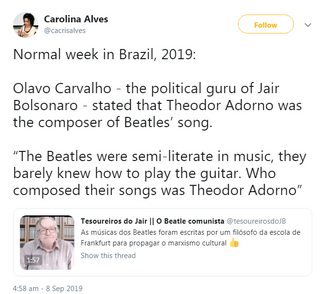 Olavo Carvalho, Brazilian president Jair Bolsonaro’s political guru, said: "The Beatles were semi-literate in music, they barely knew how to play the guitar. Who composed their songs was Theodor Adorno."


If you play "I want to hold your hand" and "She Loves you" backwards, you hear Adorno saying: ‘Advancing bourgeois society liquidates memory, time, recollection as irrational leftovers of the past'. The Beatles didn't like that, so they released a proper German version " Komm Gib Mir Deine Hand" and "Sie Liebt Dich"

There are conflicting reports on what caused the stampede as thousands of Shia Muslims gathered for the Ashoura commemoration of the death of Imam Hussein, the grandson of the Prophet Muhammad, who died in battle in the year 680.

The stampede was triggered by one person who stumbled and fell during a ritual known as the "Tuwairij run," officials told the BBC.

A mass panic ensued when a walkway collapsed near the gold-domed Imam Hussein shrine, according to officials cited by The Associated Press. Another official told the AP that there had been no collapse or crack in the walkway near the shrine

Italy and France are set to sign an agreement to exchange works by Leonardo da Vinci and Raphael, burying a spat triggered by Italy’s former populist government.

The deal is expected to be signed in Paris on Tuesday by the recently reappointed Italian culture minister, Dario Franceschini, and his French counterpart, Franck Riester. It will result in Italian museums lending works by Leonardo to the Louvre, in Paris, for an exhibition in October to commemorate the 500th anniversary of the artist’s death. In return, France will lend Italy paintings by Raphael for events marking 500 years since his death next year.

A spokesman for Franceschini said “many” works would be exchanged, but which ones would be determined in the next week.

Franceschini began the negotiations between French and Italian museums when he served as culture minister under the centre-left Democratic party’s government in 2017. The plan envisaged 26 paintings and drawings by Leonardo being lent to the Louvre for its October show.

The Paris museum holds five of only 14 paintings attributed to Leonardo, born near the Tuscan hill town of Vinci in 1452, and hoped to source further works from Italy that were robust enough to travel. They are thought to have included the Vitruvian Man drawing, in Venice, as well as the unfinished painting Saint Jerome in the Wilderness, currently on display at the Vatican Museums.

The plan hit a stumbling block when the Democratic party was ousted from government in Italy’s general elections in March 2018, paving the way for a coalition between the far-right League and the anti-establishment Five Star Movement (M5S). The then culture minister, M5S’s Alberto Bonisoli, hindered progress, claiming the deal was unbalanced. His deputy, Lucia Borgonzoni, from the League, threatened to cancel the loan of Leonardo works last November, accusing France of trying to take centre stage in the commemorations and sidelining Italy, saying “Leonardo is Italian; he only died in France”.

The renaissance master was party a wider diplomatic dispute, mostly over immigration, between the two countries which led to France recalling its Rome ambassador in February. Tensions began to ease after the French president, Emmanuel Macron, invited his Italian counterpart, Sergio Mattarella, to France in May to mark the beginning of the year-long Leonardo commemorations.

The deal was revived when Franceschini returned to the culture ministry this month after M5S formed a coalition with the Democratic party, foiling the former deputy prime minister Matteo Salvini’s gambit to collapse the government and force snap elections.

Macron arrived in Rome on Wednesday for a meeting with Mattarella and the reappointed prime minister, Giuseppe Conte, confirming the two countries were friends again.

Jacques Chirac, who molded the legacy of Charles de Gaulle into a personal power base that made him one of the dominant leaders of France across three decades and a vocal advocate of European unity, has died. He was 86.

1 Reply
1
Reply Fri 27 Sep, 2019 01:31 pm
@tsarstepan,
Paix à son âme. He was a crook but one with a good heart. I remember once during a visit to East Jerusalem, on via Dolorosa he publicly scolded the Israeli soldiers and security personnel for their aggressive treatment of the Palestinians who had come to great him. Chirac of course wanted to shake hands in the crowd, hug a few, kiss a baby etc. while the Israelis seemed overwhelmed, panicked by the contact with the Palestinians, as if each of these folks was a terrorist. So Chirac started to lecture them: "Zere is no danger, zis is not the way! Zis is a provocation! You want me to go back to my plane and fly back to France right now?" he shouted at the Israeli security nerds surrounding him. He was absolutely furious...
1 Reply
2
Reply Fri 27 Sep, 2019 02:05 pm
@Olivier5,
Jean-Louis Debré was a long-time friend and acolyte of Jacques Chirac. He told the following anecdote years ago:

One day, the Chirac were spending their holidays in Saint-Tropez. I wasn't far away, and he called me and said: "Do you want to come over? I found a restaurant on the beach, a very good restaurant, we'll both go and we'll leave Mom at home."

[by 'Maman' = Mom he meant his wife, Bernadette, of a stern ultra-catholic noble background]

Then in the middle of the morning he called me back to say "Bernadette will join us ... It will cause problems..." We arrived at the same time at the Nikki Beach restaurant. I looked up and I understood why it will cause problems: the waitresses were topless! And Chirac immediately said: "Bernadette, I have no idea why Jean-Louis always wants to drag me to this place."

Nineteen pregnant girls between the ages of 15 and 28 have been rescued in a "baby factory", the police in Lagos, Nigeria, said on Monday as the country faces major trafficking networks. Human being.

"We were informed of the activities of some individuals who were keeping pregnant women and babies for sale after delivery," police spokesman Bala Elkana said, adding that four babies were saved.

The police operation was carried out on 19 September and involved four sites, three residential houses and a hotel in Isheri Osun, on the outskirts of the country's economic capital. The police spokesman said two suspects had already been arrested. A third fled.

According to Bala Elkana, some rescued women "were deceived, thought they came to Lagos to find a job and found themselves trapped". He also said that others "knew exactly what they were doing" and hoped to make money. The children were sold 300,000 nairas (760 euros) for girls, and 500,000 (1,265 euros) boys he assured.

A widespread crime in Nigeria

Human trafficking is the third most common crime in Nigeria, behind fraud and drug trafficking, according to the United Nations. The south-east of the country is particularly affected by child trafficking. Several illegal maternity clinics have been discovered in this part of the country in recent years.

In some cases, young women took refuge voluntarily to escape the strong criticism of unmarried pregnancies in Nigerian society. These women receive a share of the money they get from selling their baby. There have also been reports of young women abducted and forced to become pregnant by human traffickers. The people who buy babies are most often couples from wealthy backgrounds who can not conceive of children.


That's bloody insane and tragic.
~~~
Knife Attack at Paris Police Headquarters Kills at Least 4 Officers
1 Reply
1
Reply Tue 8 Oct, 2019 01:29 pm
@tsarstepan,
It turns out the murderer was radicalized and may have leaked all manner of info to Islamist groups. A tragedy doubled by a huge security threat, tripled by massive embarassment for the Macron govt and especially its Minister of Interior, Christophe Castaner who initially ruled out a terrorist motive, much too soon after the crime it now appears.

1 Reply
1
Reply Tue 8 Oct, 2019 01:53 pm
@Olivier5,
Well, here in Germany an investigation is underway after a truck rammed into a line of cars in the western city of Limburg yesterday.
Several passers-by said the suspect said "Allah" several times and spoke Arabic ...

The man reportedly arrived in Germany from his native Syria in 2015 and lived in the Offenbach area near Frankfurt. He was granted subsidiary protection the following year — a status given to those who do not qualify as refugees but are in danger if they return to their country of origin.
2 Replies
1
Reply Tue 8 Oct, 2019 02:13 pm
@Walter Hinteler,
These happen a bit too regularly now.
0 Replies
1
Reply Tue 8 Oct, 2019 03:36 pm
@Walter Hinteler,
Walter Hinteler wrote:

He was granted subsidiary protection the following year — a status given to those who do not qualify as refugees but are in danger if they return to their country of origin.

Sounds odd to me. Does that status have legal significance.

Yes:
• residence permit for one year
• if extended: two more years in each case
• settlement permit possible after five years (the duration of the asylum procedure is included) if other preconditions are met, such as the ability to make a secure living and adequate knowledge of German
• unrestricted access to the labour market – gainful employment permitted
• no entitlement to privileged family reunification
Section 4 subs. 1 of the Asylum Act (AsylG)
1 Reply
1
Reply Wed 9 Oct, 2019 12:43 am
@Walter Hinteler,
Interesting. Thanks.
1 Reply
3
Reply Wed 9 Oct, 2019 11:20 am
@roger,
Two people were killed in shots fired in Halle (Saale) in Saxony-Anhalt according to the current state of affairs. There are injured people.

According to latest informations, the alleged perpetrator is the 27-year-old Stephan B. from Saxony-Anhalt. The investigators have now received a video which the assassin apparently recorded with the help of a helmet camera. The film shows B. shooting a passer-by near the Jewish cemetery and a guest in a kebab bistro near the synagogue.

The video provides clear indications of an anti-Semitic and extreme right-wing motif. For example, the perpetrator repeatedly complains about "Jews" and "Kanaks".

We have 12,000 violent right-wing radicals in Germany.
This shooting attack at the synagogue on Yom Kippur has hit Germans in the heart.

When you present David Gressly, who used to run the U.N. peacekeeping mission in Congo and who was recently appointed to coordinate the Ebola response for the U.N., with the anger and accusations of neglect, he immediately blames the government saying they are "primarily responsible" for fixing many of the country's problems.

But, he says, he gets it. The frustration with the violence and the government and the U.N.'s seeming inability to stop it is understandable. He says many times, it is the protests against the militia attacks that have hindered the response against Ebola in Eastern DRC.

He says that when security forces take action against the armed militias, the situation stabilizes and health workers are able to work more freely.