Forums: Household Chores
Email this Topic • Print this Page
Reply Sat 20 May, 2017 07:30 pm
I live in an apartment on a high floor. I wish to clean my windows. There is a way to get the lower window panel to tilt in during cleaning.

Do I use water & a squeegee? Other method? Where do I buy a squeegee?
Type: Question • Score: 0 • Views: 371 • Replies: 3
No top replies
1
Reply Sun 21 May, 2017 02:15 am
I have seen a contraption which is in two pieces, a sponge with a strong magnet behind it, which goes on the outside of the pane, and the other half is its brother which also has a magnet. You have a bucket of soapy water or Windex or whatever for the sponge. You hold the inner, controlling half against the inside of the window, in a place where you can reach outside safely and put the sponge part against the window so it clings to the glass because of the magnet on the inside half. Then you drag your inside part up and down, side to side, etc, and the outside sponge part follows it. You might have to take it inside several times to get the outside surface washed and rinsed, and I have to tell you, it makes a loud squeaking sound as it slides about. You don't want the outside part to drop off and knock the brains out of some poor sap on the sidewalk, or dent a car, or something. It takes some effort to push the sponge about. I only tried it out once, it belonged to a friend. They are widely available in household stores and online. Look for "magnetic window cleaner". You can get special strong ones for double glazed windows, that might break a single pane window. Prices from $10 up. Or maybe a sponge on a stick? 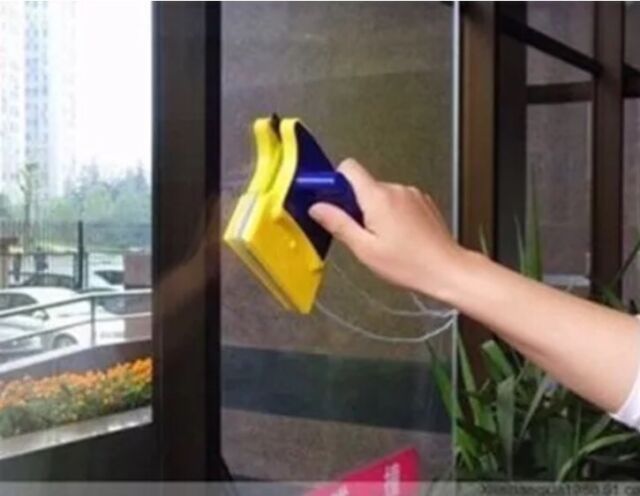