If you were God, would you change how our world exists?

(as some of you display on the forum)

To mistake curiosity and/or skepticism for "hate" indicates a real lack of empathy and perspective. If someone actually "hated" you why would they take the time to try to understand the meaning of your cryptic posts?
0 Replies
1
Reply Fri 12 May, 2017 04:27 pm
@Smileyrius,
More doggies, Smiley.
Cheaper to feed.
Easier to clean up after.
Make better lap companions.
0 Replies
2
Reply Fri 12 May, 2017 10:42 pm
@Alan McDougall,
Quote:

As an all powerful supernatural being, I would not make a world full of death and hate

Alan, have you considered the most likely answer?

Why do we never get an answer
When we're knocking at the door
With a thousand million questions
About hate and death and war?

'cause when we stop and look around us
There is nothing that we need.
In a world of persecution that is burning in its greed.

Why do we never get an answer
When we're knocking at the door?
Because the truth is hard to swallow
That's what the war of love is for.


1 Reply
1
Reply Fri 12 May, 2017 11:00 pm
@chai2,
So rubbing ourselves with fish emulsion and lying in the sun... that just about sums up life in Alan's world. Probably sex is out too as it inspires quite a bit of jealousy, so we'd just wind-pollinate and of course that means no dating because no going out to dinner. It's quite bit like the Christian Heaven; no lust, no hunger, no want, no pain, no death, just an eternity of singing God's praises in a love-rapture coma. No thanks.
0 Replies
1
Reply Sat 13 May, 2017 01:36 pm
@Alan McDougall,
No, because I would be satisfied with my creation as I assume God must be.

Now if you are asking if I could change existence, how would I? I would say in no way because, again, I assume God is satisfied with his creation.

If "God" exists (and I believe he does) I don't presume to understand all the workings of his creation and except for minor changes like a few more horses or penguins, I would hope I wouldn't try to screw with it.

Eating is a great way to recycle energy. Plants grow in soil that has been fertilized by the decaying matter of formerly living organisms, so without death, sunlight and water alone won't sustain them (or at least not most of them. I'm no botanist)

It might be nice if all life that is killed and eaten felt no pain, but then they wouldn't survive long before they ended up killing themselves by accident.

People with a childlike notion of what God must be in order to truly be "God" very often point to human suffering as proof he can't possibly exist.
Perhaps they include the suffering of other organisms, but I don't think I've ever seen any of them express that. Apparently, the suffering of an infant zebra ripped apart by hyenas only minutes after it's born is just another element of the wonderful world of evolutionary based Nature.

In my experience the people who posit that human suffering is proof God doesn't exist are most often also those who tend to rant about human arrogance. Ironic.

It's up to each individual to determine what they believe in terms of the origin of the universe. As long as they don't mock my beliefs or try to force theirs on me, I'm good.

...and penguins, there can never be too many penguins.


Holy Crap, you mean these aren't enough for you? 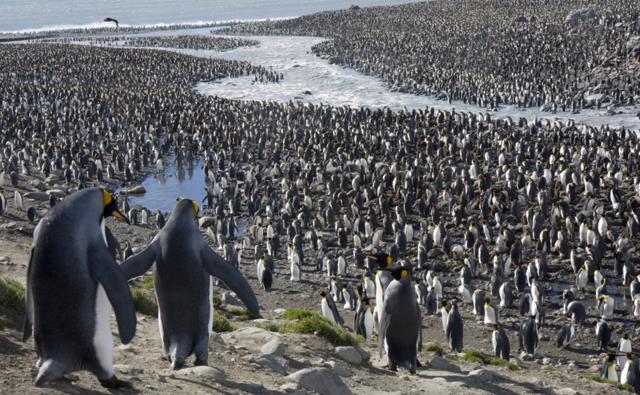 Man you are killing me!! These penguins flock together in order to share their warmth with each other from the coldest place on planet earth. They are always moving from the inside to the outside of which they have to spend just a moment or two of the unimaginable cold of the Antarctic winter
1 Reply
1
Reply Sun 14 May, 2017 10:44 am
@Alan McDougall,
Actually, these are just a normal grouping of penguins. The situation of which you speak occurs when there is a winter storm going on and they form a dense spiral of where they kind of conga line it from outer edge to inner edge, then back out again. When I saw it from above on the same Netflix documentary you did, it looks like a giant slow moving pinwheel. It looked really cool. Penguins are adapted to their environment and that's one of the ways they deal with it. They do this outer to inner movement thing when there's a storm. Otherwise they hang around with their mate and/or offspring near the small home base they have established for themselves with rock boundaries, within their colonies. Anyway, different species of penguins have different practices, and not all species form such huge colonies. Some are much smaller.

Penguins are social animals and don't venture off so live on their own. Safety in numbers in the sea and on the land. Less chance of a predator getting you. Additionally warmth might be an advantageous side effect, but that's not the primary reason they are together in a colony. The ones who have their nests near the edge of the colony are simply the ones that have more of a chance of getting picked off. They're certainly not constantly rotating to the center, as they will be put in their place.

Regarding predators/danger/failure, have you ever heard of The First Penguin Award"? I hadn't thought of that in a long time.
0 Replies
1
Reply Sun 14 May, 2017 11:11 am
Here's a video of the penguin sprial.

0 Replies
1
Reply Tue 16 May, 2017 03:25 pm
@Alan McDougall,
If Creationism existed that would be possible. But, thankfully God created the Universe the only way that it could be. With math. It's perfect beyond our comprehension. It cannot be changed because there is only one truth. Your question is like this one " If you were God, would you change 2+2=4?"
0 Replies
1
Reply Tue 16 May, 2017 03:32 pm
@ekename,
I love your way of using poetic metaphors(songs) to get a point across.

So we'd all be plants? What would drive our development?


No we will not be plants, even now the only way we are able to move is because of the suns warmth, all I am suggesting (If I were Omniscient) is to make energy from the sun more direct.
0 Replies
1
Reply Sat 3 Jun, 2017 10:15 am
If I had the power to change things, I obviously would. Too many things are wasted because the odds hase always been against many people's better judgement
0 Replies
1
Reply Wed 14 Jun, 2017 03:38 pm
I'd make it definite that planets and atoms don't need right-wing politics
0 Replies
1
Reply Fri 16 Jun, 2017 09:38 pm
@Alan McDougall,
If you could, would you change anything about your life or the lives around you?
0 Replies
1
Reply Sat 17 Jun, 2017 04:12 pm
@TomTomBinks,
TomTomBinks wrote:

As for me I really dislike this eat kill or be killed and be eaten yourself way of surviving on planet earth!

Now I kind of like that, as long as I'm doing the eating. I think more things should taste like bacon. Maybe even some vegetables. That's it, if food that was actually good for you tasted good, we'd all be healthier. By Divine Decree I hereby make healthy foods taste good and unhealthy foods taste bad... and I saw that it was good, yada yada yada...


Getting a little philosophical myself, how on earth would you know something is tasty unless you have consumed something yukky also, like caster oil or vile you know the old duality argument.?
0 Replies
1
Reply Sat 17 Jun, 2017 04:22 pm
@TomTomBinks,
I would change the laws of physics so that we cannot destroy humanity with atomic weapons.
0 Replies

How can we be sure that all religions are wrong? - Discussion by reasoning logic
What if no religions are correct, but there still is a God? - Question by neologist
We are all like little children who often say: "Mom, Dad, leave me alone, I want to be on my own". - Question by Leaffan
Beyond tribalism; How well does your religious label serve you? - Discussion by MattDavis
Is religion responsible for the opposition to peace in the Israel-Palestine conflict? - Question by maxdancona
Concern for Religious Freedom or Preaching Political Messages? - Discussion by wandeljw
Are atheists being more illogical than agnostics? - Discussion by igm
Why believe in god? The theist perspective. - Discussion by msolga
Why People Seek Solace In Gods. - Question by mark noble
Catholic remarried couples should abstain from sex - Question by Tes yeux noirs
How can a good God allow suffering - Question by SawyerMentink
Copyright © 2021 MadLab, LLC :: Terms of Service :: Privacy Policy :: Page generated in 0.05 seconds on 09/19/2021 at 08:37:12
▲ ▼