What is the link between knowledge, science and right-wing politics?

Forums: Cause And Effect, Science, Politics, Physics, Life
Email this Topic • Print this Page
Reply Mon 3 Oct, 2016 07:38 am
Right-wing politics needs knowledge and science, just as left-wing politics does, but does the right differ from the left inasmuch that the former directly creates knowledge and science?
Are science and knowledge the values of the political right?
Type: Question • Score: 2 • Views: 2,580 • Replies: 49
1
Reply Mon 3 Oct, 2016 09:41 am
@Thomas33,
The values of America from the time of the revolutionary war to about 1900 are the values of the Right. If scientific findings don't conflict with those values, fine. If scientific findings do conflict with those values, science loses, (in the Right's book).

The Right isn't too crazy about how the country has gone since the previous turn of the century.
1 Reply
0
Reply Mon 3 Oct, 2016 10:29 am
@Blickers,
Nonsense

You're referring to religious fundamentalists. They come in all flavors.
1 Reply
2
Reply Mon 3 Oct, 2016 11:02 am
@Thomas33,
Tom, one thing about the Right Wing, so vigorously opposed to ed. of kids in certain areas. I've long maintained it'd be a better world if a bit of philo, psych, poli, hist, etc were taught in grade school, possibly start in 'gart'

What do you mean by saying that the right directly creates knowledge and science.? Science, although it can certainly be influenced by politics, attempts to be neutral in regard to politics.
2 Replies
0
Reply Mon 3 Oct, 2016 06:38 pm
@InfraBlue,
'Attempts' is the operative word there..ain't no scientist doing no research if ain't going to be given the money by politics..that includes universities as well.

And really, science doesn't 'attempt' anything. I think that is a shortcut way of looking at something that is already in full swing. Context is king.

The subject matter, the hypotheses, the framework for what is even considered as a possible conclusion undermine any 'attempt' at 'pure' science.

That's not to say that science influenced by politics isn't good science, worthwhile or 'valid', its just that all science should be conceived of as having as its backdrop a political flavour. Its the reason why the American flag was put up on the moon as opposed to say a 'world' flag. The science was good though!

The institutions that fund our scientific endeavors are monolithic structures that are provincial in their outlook and only have so much money to dole out. The people that dole that money out rarely give a blank check. They are people with political bents (and will withdraw that money for projects they don't deem worthy).

It is in this sense that they are 'conservative'. Not 'Republican' or 'right wing' conservative. In this sense you can be liberal and conservative..It might better be conceived as restrictive and necessarily so because it is a human endeavor..

As I see it, with few exceptions, this is how it works out on the whole, unless you are digging up dirt in your backyard with a microscope and some litmus paper..

Again, I'm not trying to valuate this phenomenon, just trying to place it in context..
0 Replies
0
Reply Mon 3 Oct, 2016 06:39 pm
@InfraBlue,
But politics being driven by corporate money isent neutral to science. Conservative politics declares a scientific claim whatever its corporate sponsor says it is. Fact are either ignored or some scientists are bought to prove the fact wrong whether it is or not.
1 Reply
-1
Reply Mon 3 Oct, 2016 07:00 pm
@RABEL222,
And liberal politicians never view science through a political prism.

Can you give examples of the Left denying scientific findings?
3 Replies
-1
Reply Tue 4 Oct, 2016 08:15 am
@Blickers,
The Right doesn't oppose Evolution, The Out of Africa Theory or the Big Bang Theory.

A certain faction (Christian Fundamentalists) may, to one extent or the other, but there are millions of conservatives who have no problem with any of these theories.

I didn't say the Left has denied any scientific finding, although I imagine that if I searched I could find some faction of the Left that does.

I questioned the notion that the Left doesn't view science through a political prism.

Do you believe that notion?

1 Reply
2
Reply Tue 4 Oct, 2016 10:25 am
@Finn dAbuzz,
About 70% of the Evangelical Christians-not sure that is entirely synonymous with Fundamentalist Christian, but there is probably something of a correlation there-are Republican.


About 24% of them are Democrats. Most, but not all, are African-American.

So you can't say the Right is 100% Christian Fundamentalist, but they are a big part, perhaps a majority, of the Right's political base. And as literal interpretationists of the Bible, they are not onboard with Evolution, The Out-Of-Africa Theory, or The Big Bang. 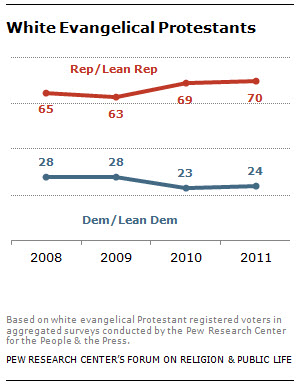 I doubt fundamentalists make up the majority of the Right in America. They don't speak for me. Claiming The Right opposes science is just another overly broad smear tactic. Even the Religious Right doesn't oppose science, it simply chooses their religious teachings over certain scientific theories. I can't agree with them, but it hardly means they are some breed of ignorant troglodytes.

I somehow feel that progressives are willing to give a free pass to the fundamentalist African-Americans who "oppose" science.
2 Replies
2
Reply Tue 4 Oct, 2016 10:50 am
@Blickers,
Of course there are those on the left that deny scientific findings. The biggest examples are GMO and vaccination scares.

I somehow feel that progressives are willing to give a free pass to the fundamentalist African-Americans who "oppose" science.

They are free to believe what they want if they don't try to force it on the rest of us with legislation which is something the right has attempted to do with it's science denial.
2 Replies
2
Reply Tue 4 Oct, 2016 12:03 pm
@Finn dAbuzz,
Finn dAbuzz wrote:

I somehow feel that progressives are willing to give a free pass to the fundamentalist African-Americans who "oppose" science.


Your assumptions would be considered cute if they weren't pretty darn hypocritical. I disdain them as much as I do, conservative climate change deniers, evolution deniers, etc....

Evangelical/social conservative African-Americans also tend to be homophobic, anti-Semitic, racist, antiIslamic, misogynistic, etc.... You should take pride in their hateful abundance.
1 Reply
0
Reply Tue 4 Oct, 2016 12:12 pm
@parados,
There you go again with lumping all factions of the Right together.
1 Reply
1
Reply Tue 4 Oct, 2016 01:19 pm
@Finn dAbuzz,
Where did I say all factions of the right has done it or even that one faction has done it all the time?

Are you denying that anyone on the right has legislated or attempted to legislate from their anti-science stance? I can't think of any instance on the left where someone has been able to push anti-science legislation into the mainstream far enough to be considered, let alone passed.
1 Reply
0
Reply Tue 4 Oct, 2016 03:14 pm
@parados,
Thank you for being honest parados.
0 Replies
-2
Reply Tue 4 Oct, 2016 03:15 pm
@parados,
When you say "science denial" what exactly do you mean, and how is it being forced on you (if only by attempt)?
1 Reply