1 Reply
1
Reply Sun 15 May, 2016 12:43 am
@Tes yeux noirs,
Once you elevate 'religion' to the status of an academic subject, schools are obliged to apply modes of teaching common to other subjects. A history teacher for example might legitimately ask students to consider what Britain would have been like if Germany had successfully invaded in 1940. The difference is that such a scenario is far more specific and less hypothetical than some ad hoc selection from 'Holy Writ' ( fiction originating from numerous human authors). The problem is therefore the status of 'religion' as a 'school subject' and IMO it is a disservice to social cohesion to give it such a status, especially in state schools charged with the duty of cultivating a harmonious society. The issue is of course exacerbated by the history of 'education' in the West in which 'Divinity' and 'Theology' have become university degree subjects with 'career' prospects. So atheists and agnostics have tended to be lampooned as 'Canute arguing with the Tide', or swamped by PC waffle about 'respecting the diversity of cultures'.
1 Reply
1
Reply Sun 15 May, 2016 05:53 am
@fresco,
When I was at "Junior" school (age 7 to 11) in the UK, we had "RK" (Religious Knowledge) classes, which were more or less New Testament stuff, related to Christian festivals such as Easter, Christmas, Palm Sunday, etc. It can't have gone into much detail because I seem to recall not knowing what a "virgin" was until I was about 12. At a private ("public") secondary school (11 to 18) we had "Divinity" classes conducted by the School Chaplain, and these were resolutely non-controversial: no Holy Ghost stuff, not a lot about Jesus, mainly Old Testament history & Saul, Nebuchadnezzar etc. All very Anglican. In both cases I see now that it was perfunctory in the extreme, and the message was not "this is the truth and it's majorly important", rather "This is what it says in the Bible and we've got to teach it for an hour every week because the law says so, but it doesn't really matter".

As for the original question, I personally imagine that "a new world based on the fruits & gifts of the holy spirit" would probably be rather like what you see on the cover of the Watchtower. That is, a free picnic with zoo animals and a conservative dress code. Lots of smiling, although I think Donald Trump wouldn't be happy, judging by the picture below. There will be hairdressers who learned their craft in the 1920s. There are plenty of discussions of the "World to Come" in the Bible, and a cursory Google search will bring up plenty of ideas- lions laying down with lambs, etc. See the Nicene Creed, also Matthew 12:32, Mark 10:30, Luke 18:30, Hebrews 2:5, Hebrews 6:5. Other related expressions are "age to come" which is typically found in more recent translations, Kingdom of God, Messianic Age, Millennial Age, The New Earth and New Jerusalem, and dispensation of the fulness of times and possibly also eternal life. 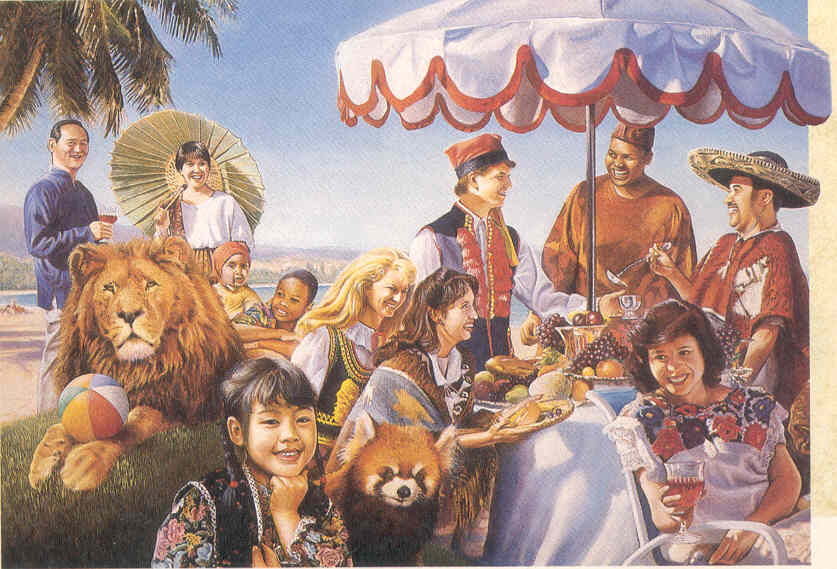 These are the gifts and fruits of the Holy Spirit

I had some Jehoves withesses with a picture like that - except it was a lamb instead of a ball.
I look seriously at the lion and asked if it would not eat the lamb.
Oh no not in the new peaceful world.
Hm...a lion´s teeth are not make for chewing grass
God will take care of that and give the lion new teeth.
Problem solved.

God will take care of that and give the lion new teeth.

Not only God. You may have heard of the Reverend Ian Paisley, a Northern Ireland politician and preacher. He specialised in "hellfire and brimstone" sermons, in a shouting style, and preached to packed churches. The story goes that one Sunday he was getting into his stride and declared "There will be wailing and gnashing of teeth!". A little old lady in the front row of seats put her hand up and said she hadn't had any teeth of her own for 20 years. "Madam", Paisley replied, "teeth will be provided".

How can we be sure that all religions are wrong? - Discussion by reasoning logic
What if no religions are correct, but there still is a God? - Question by neologist
We are all like little children who often say: "Mom, Dad, leave me alone, I want to be on my own". - Question by Leaffan
Beyond tribalism; How well does your religious label serve you? - Discussion by MattDavis
Is religion responsible for the opposition to peace in the Israel-Palestine conflict? - Question by maxdancona
Concern for Religious Freedom or Preaching Political Messages? - Discussion by wandeljw
Why believe in god? The theist perspective. - Discussion by msolga
Why People Seek Solace In Gods. - Question by mark noble
Catholic remarried couples should abstain from sex - Question by Tes yeux noirs
How can a good God allow suffering - Question by SawyerMentink
Religion and Fear - Discussion by TomTomBinks
Copyright © 2022 MadLab, LLC :: Terms of Service :: Privacy Policy :: Page generated in 0.05 seconds on 07/02/2022 at 01:39:02
▲ ▼