Texas Creating Its Own Gold-Based Currency

Forums: Texas, Gold, Currency
Email this Topic • Print this Page
1
Reply Thu 18 Jun, 2015 06:15 pm
@neologist,
It is? Have a link on that?
You should especially know that Neodymium's used in making the "fake flint" strikers they use in welding torch strikers and campers survival fire starters (they mix it with magnesium powder and sinter it). Im sure youve used em, since you market survival stuff.

A client of mine uses Nd to make depilatory lasers called "Ne-YAG" lasers. They are used to remove unwanted hair. 9many other uses but I thought Id stay in the domestic arenas)
Nib magnets (sorta like AlNiCo magnets except waaay stronger).
I never knew it was used in hybrid batteries. Lithium is used but Nd is news to me I would love a link on that. As far as China being the orld HQ, thats becuase they are exploiting it. We have several dozens untapped deposits of stuff (that remains a secret to the chef)
1 Reply
0
Reply Fri 19 Jun, 2015 12:54 am
@farmerman,
I may have confused neodymium with the other rare earth metals used in battery making. Neodymium is extremely magnetic. Another metal, cerium is the sparking part of ferrocerium. But the alloy has other rare earths mixed in with it. Odd thing about rare earths is that they are not particularly rare. They are, however, difficult to extract. I read somewhere that there is more cerium in the world than there is lead. Can't get a spark off of lead, though.

If the entire planet were to go back to the gold standard, the economic powerhouses of the earth would be Canada, South Africa and Russia.

This interactive map of unmined gold by country indicates that Australia has the highest reserves in the world (7,400 tonnes), followed by South Africa and Russia ( Canada is ranked 15 with 920 tonnes). 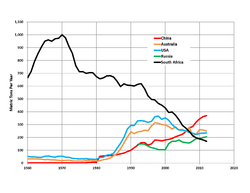 https://en.wikipedia.org/wiki/List_of_countries_by_gold_production
2 Replies
-1
Reply Fri 19 Jun, 2015 03:54 am
@knaivete,
Well doesn't it just make your little rectum pucker to think that you can run off and make yourself out to be so knowing . . . while, of course, completely missing the point.
0 Replies
0
Reply Fri 19 Jun, 2015 04:10 am
@knaivete,
Those are only "known" reserves. Theres no doubt that we will be discovering whole new deposits that are not only based on concentration of gold, but will be based on new technologies of recovery and production from such things as pyrites and trap rock. We just made a huge discovery of gold in iron and Titanium in AFghanistan. The gold deposit os worth in the several trillion dollars.

Think of oil and gas. In the last 15 years alone, weve jacked up the world reserves of G&O by almost 8 times (and still growing)> Its not that weve discovered entirely new deposits (weve known that the MArcellus and Baaken shales contained gas and oil for over 50 years). Instead, weve developed these new technologies of drilling and recovery that potentially can turn any marine deposit of shale and sandstone into a potential gas source.
Also, think of diamonds. The discovery of these new kimberlites in Canada and Russia will change the entire dynamic of diamond prices if the market is left to work.

0 Replies
-1
Reply Fri 19 Jun, 2015 04:16 am
I checked the Wikipedia article from which Knaivete got the graph and it lists China as number one, and Canada as number 5, not number 15. I've never bothered with that snotty little ****'s criticisms in the past, but maybe i ought to have done.

The point which seems to have eluded Knaivete entirely, is that with a metal based currency system, nations whose economic systems are not robust or large would have an inordinate economic power based on their gold reserves and their ability to produce more, rather than healthy economic indicators. Russia would be the most glaring example of this.
1 Reply
0
Reply Fri 19 Jun, 2015 04:20 am
@Setanta,
well Russia can always make vodka with gold fleks innit. (Course theyll prbably drink it all at home and have nothing with which to trade)

Sometimes the more news I read or watch on TV, the worse my hoper gets. Lately, it's at an all-time law (SC slayings leading the lists). I don't think sticking my head in the sand helps...but ...OTOH, there IS plenty of white pretty sand where I live.
0 Replies
1
Reply Sun 21 Jun, 2015 09:01 am
To me, the divide in this country is uncomfortably similar to the one prior to the Civil War. How to simmer it down? I don't have a clue.
0 Replies