There is this incredible pitcher from Philadelphia - not just one of the best pitchers and players - but a girl to boot.

Last night's game Cumberland, RI against Chicago, IL - an incredible game on both sides. One highlight was when a boy on Chicago crushed the ball for a home run. As he is running to first, he jumps in celebration as he sees it is a home run moving his team into the lead. After he arrives home, he goes into the opposing team dugout to apoligse to the coach for showboating. In which the coach says no - you are just celebrating.

Highlight of the RI coach's speach to his team after losing by just 8-7.

“Heads up high. Heads up high. I’ve gotta see your eyes, guys. There’s no disappointment in your effort — in the whole tournament, the whole season. It’s been an incredible journey. We fought. Look at the score – 8-7, 12-10 in hits. We came to the last out. We didn’t quit. That’s us! Boys, that’s us!

“The lessons you guys have learned along the journey, you’re never going to forget. We’re going to have some more fun. We have two more days of fun. When you walk around this ballpark in the next couple of days, they’re going to look at you and say:

"It’s OK to cry, because we’re not going to play baseball together any more. But we’re going to be friends forever. Friends forever. Our Little League careers have ended on the most positive note that could ever be. OK? Ever be.

“There’s only going to be one team that’s going to walk out of here as World Series champions. Only one. We got down to the nitty-gritty. We’re one of the best teams in the world. Think about that for a second. In the world! Right?

“I love you guys. I’m gonna love you forever. You’ve given me the most precious moment in my athletic and coaching career, and I’ve been coaching a long time – a looooong time. I’m getting to be an old man. I need memories like this, I need kids like this. You’re all my boys. You’re the boys of summer.

“So, for the last time, we’re going to yell Americans: One, two three – Americans!”

Type: Discussion • Score: 4 • Views: 1,301 • Replies: 14
0
Reply Tue 19 Aug, 2014 10:41 am
I haven't watched any of the games, but the LLWS is big news around here because of the Jackie Robinson West team. Even Mayor Rahm Emanuel has jumped on the JRW bandwagon.
0 Replies
1
Reply Tue 19 Aug, 2014 11:04 am
@Linkat,
I've been watching some of the games, the young players are so much fun to watch. I did see a short interview with the girl who plays in the league, she was incredibly poised . A reporter asked her if she was worried about being pestered by the press, and she said, 'not really, I can always say no'. I wish more adults would say no to all the ridiculous interviews.
1 Reply
1
Reply Tue 19 Aug, 2014 01:26 pm
@glitterbag,
I believe her team plays tonight and she is pitching.

The kids are so fun to watch -- also fun is seeing the parents reactions in the stands.

I think alot of major leaguers should take lessons on poise and sportsmanship from these kids.
1 Reply
1
Reply Thu 21 Aug, 2014 08:26 am
@Linkat,
I've watched every game. Like you I'm absorbed.

LL has come a long way. The kids are much better players than in the past.

The Nevada team(powerful hitters) finally caught up with Mo'ne.
She'd been throwing "high heat" and the Nevadans shelled her.

The coach's speech: very moving
1 Reply
1
Reply Thu 21 Aug, 2014 08:57 am
@panzade,
That was a good game. Las Vegas coach played it well with the decisions on pitching. Incredible catch in the outfield by that little guy for Nevada.

Love too the differences in sizes of the boys - you have some tiny little guy that is 80 pounds soaking wet playing with a 6'2" teammate. Just funny how some grow and mature so much younger than others at that age.

That other little pitcher from PA -- the one with the braces -- was a hoot.
1 Reply
3
Reply Thu 21 Aug, 2014 12:06 pm
@Linkat,
Having played LL as a kid I remember the top teams with six foot 12 year-olds kickin out butts.
I wasn't good at standing up to the pressure of making clutch plays.
I don't see how these kids do it with a national audience looking on.
1 Reply
1
Reply Thu 21 Aug, 2014 01:17 pm
@panzade,
Whatever happens to these kids afterwards -- whether they go on to be athletes or not I would imagine they learn alot of this experience -- playing under pressure, being on TV, interviewed, playing under such strong competition; life lessons they are learning.
0 Replies
1
Reply Thu 21 Aug, 2014 07:31 pm
I have been watching from the beginning, and try to watch it every year.

The girl from Philly, her name is Mo'ne Davis.
It looks like it will be Chicago and Las Vegas for the US title.
That game will be fun to watch, as both teams have a lot of power and good defenses.
1 Reply
2
Reply Fri 22 Aug, 2014 08:23 am
@mysteryman,
Well Las Vegas has the advantage -- Chicago's star pitcher cannot pitch in this game and Vegas has some really good bats. But you never know -- especially realizing how young these kids are - mentally you never know what can happen.

Either way it is fun to watch --- the one thing I love about kids (and I see this with my own kids playing tournaments and league games) -- they can get very upset right after losing a big game especially one so close as like last night's game, but within a few hours they are running around laughing and having a good time again. 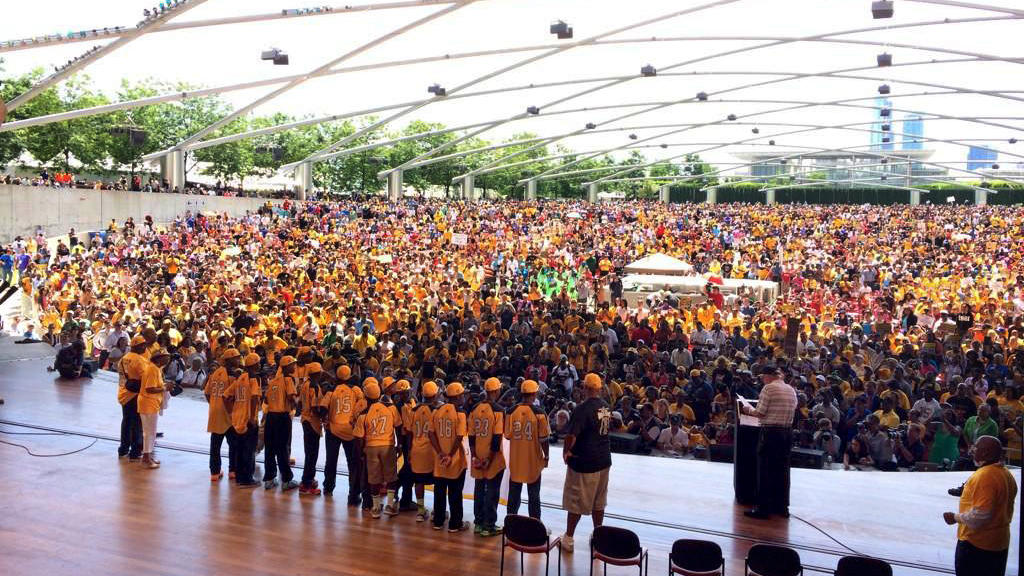 Its official...its going to be South Korea vs Illinois for the world championship.

Its going to be power vs power.


It was an excellent game. We've always played alot of sandlot baseball in the City of Chicago, expecially on the SouthSide, in the Summer time. I loved it and will never forget the great times I had.

These Chicago kids are the greatest and hopefully will win baseball scholarships to College.

Also, lets not forget the past wins of others, such as the kids from Chicago's North Roseland area, an area of the SouthSide, where the kids are also smart and tough and very talented when it comes to baseball and basketball.
0 Replies