"I didn't attend the funeral, but I sent a nice letter saying that I approved of it."

I saw this on a Twain quotes website, and I love it. I think I might have heard it before, but I can't remember: does anyone know whose funeral he's talking about here? Or where it's from?

I have read, but can't assert that this is true, that this refers to his own funeral. He was chronically broke, so he used to tour Europe doing public readings--not because he enjoyed it, but because he was broke. Once, while on such a tour, he was reported to have died. In the stupid style typical of journalists, reporters rushed to his hotel to ask him about it. He promptly replied:

"The reports of my death have been greatly exaggerated."

Another was something like, "History of a private campaign," about a group of boys in Missouri who form a small band of rebel soldiers, under the direction of a fanatic adult, during the Civil war. It's hilarious but ends tragically. 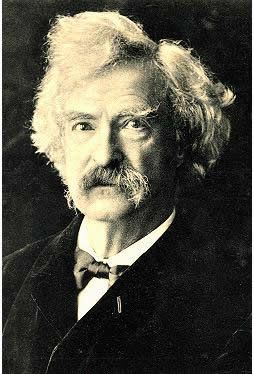 Here is a good site for quotes and pictures
http://www.twainquotes.com/A.html


Personally, I read about Tom Sawyer the same time i was reading about Dicken's Oliver