A magnitude 6.9 earthquake occurred off the coast of Eureka in Northern California on Sunday night, the U.S. Geological Survey reported.

The temblor hit at 10:18 p.m. 50 miles west of Eureka in Humboldt County. According to the USGS, the earthquake was felt over a large swath of the North Coast as well as other parts of Northern California.

There were no immediate reports of injuries or tsunami warnings.

A massive 6.9-magnitude earthquake hit off the coast of Northern California Sunday evening, 50 miles west of Eureka, Calif., according to the USGS.

The earthquake was recorded at around 10:18 p.m. Pacific and KTVU viewers say they felt it as far away as Redwood City.

USGS seismologist Susan Hoover says more than 300 people have reported feeling the temblor on their website as of 10:49 p.m., according to the Associated Press.

Mike Meltzer, a bartender at the Hotel Ivanhoe in Ferndale (in Humboldt County, the county nearest to the quake's epicenter), told KTVU that the quake rolled for around 10 seconds.

"I've been through a number of these," said Meltzer. "It wasn't a jolter; it was a wave."

He said the extent of the damage from the quake was a football and a bottle falling over.

As of 10:48 p.m. there were no reports of injuries and a tsunami warning had not been issued.

March 9, 2014 at 11:09 PM A witness reporting from Eureka: "It lasted what seemed like a long time and progressively got stronger. The house rattled and shook quite a bit but amazingly nothing fell and the power didn't go out like the one of about the same size." 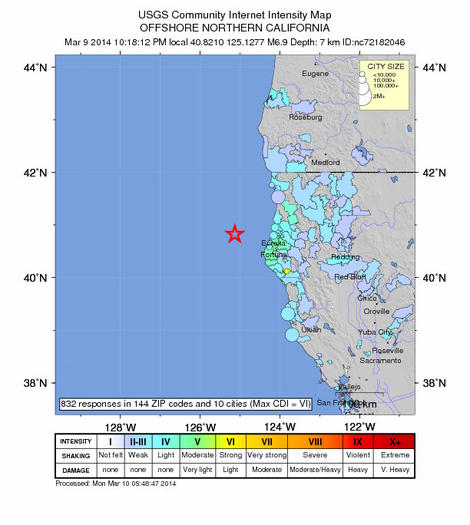 0 Replies
1
Reply Mon 10 Mar, 2014 12:51 am
Looks like California lucked out once again, and has yet to slide into the Pacific.
1 Reply
2
Reply Mon 10 Mar, 2014 07:20 am
@Butrflynet,
Boy was my mailbox full of stuff this AM.
I wouldn't worry about Calif going out to sea. Its more like western Calif will be passing eastern Calif in some tens of millions of years as the Pacific plate slide NW and the American Plate slides SE.


The San Andreas slips several inches each year, when it is quiet, it gets worrisome. The southern segment has been especially quiet.

In the Bay Area, focus has been on the Hayward and Calavaras faults. They are both way overdue.
1 Reply
2
Reply Mon 10 Mar, 2014 12:55 pm
@Butrflynet,
Its only worrisome if stress builds up, otherwise its just a smooth slippage where faults grind along their planes of movement.
Theres tens of crosscurrent faults and each resolves its stress buildup and these are monitored by microseismic stations all over the place.(Many of these USGS stations are actually supported by CalDOT and the building industry).
Rebuilding itself is one of Califs biggest indutries
0 Replies
1
Reply Mon 10 Mar, 2014 12:58 pm
@rosborne979,
there are a number of seismic strain gages and micoseism tations that record and from which USGSand the Cal GS run models which attempt to predict. I get P/S ratio curves fom GS that , whenever the PvS and L waves cross due to some degeree of solution (Solifluction) the P waves actually slow down and this can preceed a big one. I think ed have about several hours notice for another Hayward
0 Replies
1
Reply Tue 11 Mar, 2014 07:03 pm
M5.1 - OFF THE COAST OF OREGON