Is whisky your poison?

BTW, many, many years ago, when visiting Scotland, we visited a small whisky distillery for a free sample.
1 Reply
1
Reply Fri 7 Apr, 2017 02:11 pm
@cicerone imposter,
Scotch is very different from Bourbon, and Irish whiskey. Japanese whisky follows Scottish methods which is why it's whisky and not whiskey.
2 Replies
1
Reply Fri 7 Apr, 2017 02:28 pm
@izzythepush,
I know there's a difference between bourbon and scotch. Had my share of drinking alcohol during many of my travels around the world.
Last year, my doctor told me "no more alcohol." However, after talking to my doc, she said I'm allowed one glass of wine once a week. Bettr'n nuttin.
If you ever get around to traveling in our area, let me know. I'll invite you to enjoy my stock of wine and hard stuff.
1 Reply
1
Reply Fri 7 Apr, 2017 03:33 pm
@cicerone imposter,
Thank you, the next American city I would like to visit is San Francisco, but I'm more likely to visit N Africa and Europe, it's so much cheaper from here.
1 Reply
1
Reply Fri 7 Apr, 2017 03:38 pm
@izzythepush,
I have visited both North and South Africa, and most of Europe. Have friends in many of those countries. I was stationed in Morocco for one year when I served in the US Air Force back in the late 1950s.
San Francisco is a popular destination for visitors to our country. If you do plan a visit, let me know.
0 Replies
1
Reply Fri 7 Apr, 2017 06:16 pm
@izzythepush,
I like them all, what e're the spelling; I almost have them straight by now. I hardly ever spring real money for them, once a year or two, if that.
My sentimental favorite is an irish whiskey, Powers Three Swallows, Powers once being my married named until I went back to my own, still married (I think of myself as the last of my dad's family tree, far as I know). Hyphens didn't work for me back then, too much confusion.

Decades ago, we had a professor friend who liked to throw parties at his house, I think a kind of university politics, but also a pleasure - always interesting people, at least some of them. I remember helping cook and got to know some of the people. His bar area was the most interesting I've ever seen, by far, multiples of far. Thus, for those years, we sipped quite a round up of single malts.
0 Replies
1
Reply Sat 8 Apr, 2017 07:18 am
Anything beyond beer and wine has never been good enough to me to drink enough to get drunk. Or at all, mostly.
1 Reply
1
Reply Sat 8 Apr, 2017 10:59 am
@edgarblythe,
Spoken like a true navy man.
1 Reply
2
Reply Thu 6 Sep, 2018 06:28 am
@cicerone imposter,
Japan’s Whiskey-Makers Are Rationing Some of Their Best Booze to Prevent a Shortage

Japanese whisky is a style of whisky developed and produced in Japan. Whisky production in Japan began around 1870, but the first commercial production was in 1924 upon the opening of the country's first distillery, Yamazaki. Broadly speaking the style of Japanese whisky is more similar to that of Scotch whisky than other major styles of whisky.

There are several companies producing whisky in Japan, but the two best-known and most widely available are Suntory and Nikka. Both of these produce blended as well as single malt whiskies and blended malt whiskies, with their main blended whiskies being Suntory kakubin (角瓶, square bottle), and Black Nikka Clear. There are also a large number of special bottlings and limited editions.

Two of the most influential figures in the history of Japanese whisky are Shinjiro Torii and Masataka Taketsuru. Torii was a pharmaceutical wholesaler and the founder of Kotobukiya (later to become Suntory). He started importing western liquor and he later created a brand called "Akadama Port Wine", based on a Portuguese wine which made him a successful merchant. However, he was not satisfied with this success and so he embarked on a new venture which was to become his life's work: making Japanese whisky for Japanese people. Despite the strong opposition from the company's executives, Torii decided to build the first Japanese whisky distillery in Yamazaki, a suburb of Kyoto, an area so famous for its excellent water that the legendary tea master Sen no Rikyū built his tearoom there.

Torii hired Masataka Taketsuru as a distillery executive. Taketsuru had studied the art of distilling in Scotland, and brought this knowledge back to Japan in the early 1920s. Whilst working for Kotobukiya he played a key part in helping Torii establish the Yamazaki Distillery. In 1934 he left Kotobukiya to form his own company—Dainipponkaju—which would later change its name to Nikka. In this new venture he established the Yoichi distillery in Hokkaidō 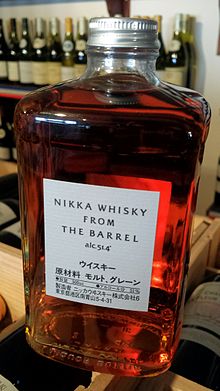