YOU CAN'T DO THAT

Ringo Starr has called on Paul McCartney, Yoko Ono and Olivia Harrison to sift through their private photograph collections for a new Beatles project: “If they’re listening ... dig out the negatives,” he said.

Starr was speaking at the National Portrait Gallery (NPG) in London, where a new display of recently found photographs that he took and then forgot about was going on public display.


http://www.theguardian.com/music/2015/sep/09/ringo-photos-beatles-national-portrait-gallery-launch-book-exhibition<br />
0 Replies
1
Reply Sat 12 Sep, 2015 01:03 pm
I can't get that one to work either, but it's not your fault. Google says the page contains too many redirects--by which i suspect it means advertising.
1 Reply
1
Reply Sat 12 Sep, 2015 01:17 pm
@Setanta,
If you include in your link that errant tag <br> it'll misdirect:

This same link w/o that tag works just fine for me:
http://www.theguardian.com/music/2015/sep/09/ringo-photos-beatles-national-portrait-gallery-launch-book-exhibition

Ringo Starr has called on Paul McCartney, Yoko Ono and Olivia Harrison to sift through their private photograph collections for a new Beatles project: “If they’re listening ... dig out the negatives,” he said.

Starr was speaking at the National Portrait Gallery (NPG) in London, where a new display of recently found photographs that he took and then forgot about was going on public display.
They include images of his fellow Beatles larking around and relaxing, as well as photographs taken on the band’s first visit to the US in 1964.

The photographs are being published in a new book but Starr thinks there are many more fascinating pictures taken by his Beatles bandmates that could also be published.

“The other boys had cameras too, so the next plan is I want to get the rest of my pictures, Paul’s pictures, Yoko will have John’s pictures, Olivia George’s ... it would make a great book. I’ll be in a lot more photos.”

He added: “If I put it out there, they might respond
Starr said he discovered thousands of old negatives in boxes he hadn’t looked in for nearly 30 years. “I had a lot of stuff in storage and we had to move everything and I started finding books of negatives, a lot of them I didn’t know I still had.”

He said he had always been a keen photographer but was a late starter. “Growing up, we didn’t have cameras. I’ve got like six or seven photos from being christened until I was 18. Then I got into the cameras and now there is a lot of photos.”

Starr managed to get pictures of his bandmates looking relaxed and unguarded. “These are shots that no one else could have taken.” he said. “Together, they chart the story of four lads from Liverpool trying to live normal lives amidst the frenzy that surrounded them.”

There are 20 portraits going up in the display in the NPG’s bookshop. Each can be bought for £1,900 as part of a limited edition. The book is published on 21 September but can be bought beforehand from the NPG.

On the cover is a photograph of a young silky-haired Starr with a cigarette and camera taken looking directly into a mirror. “I like to say it is the first selfie,” he said. 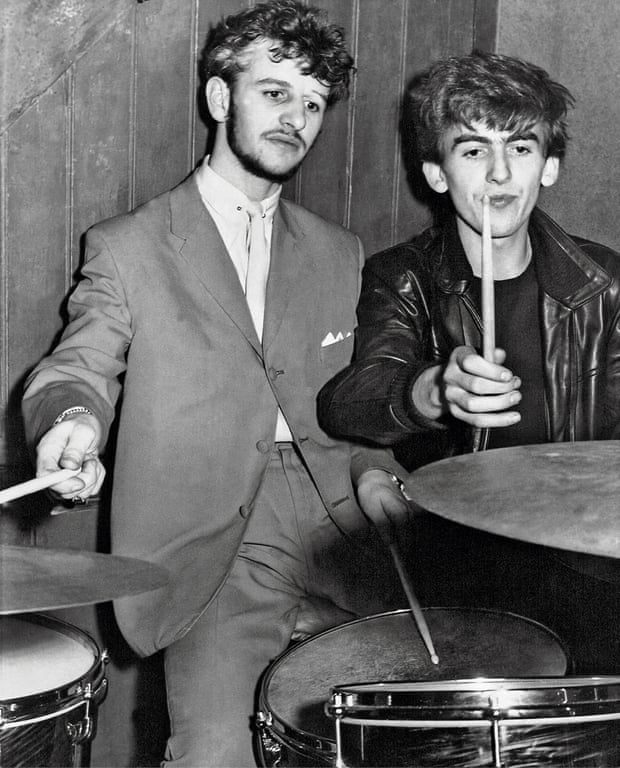 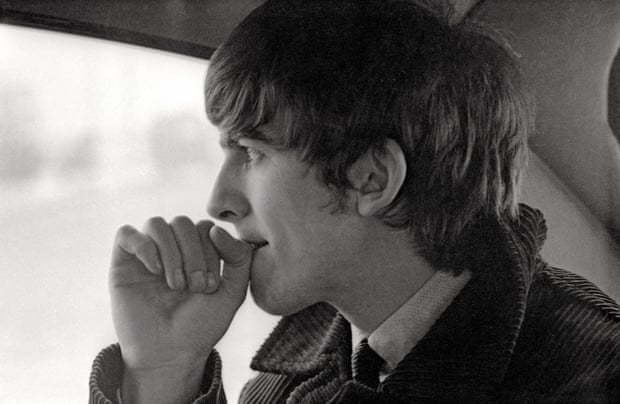 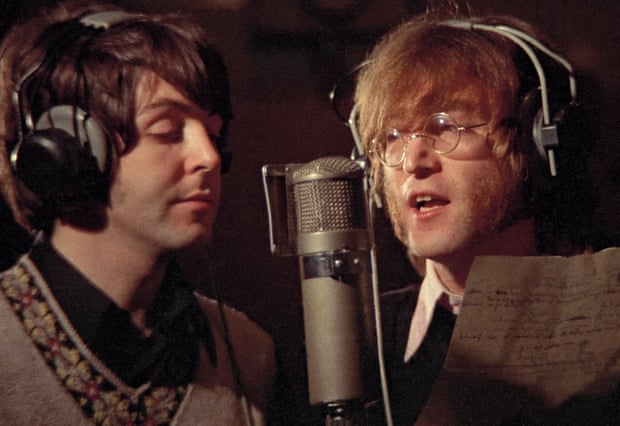 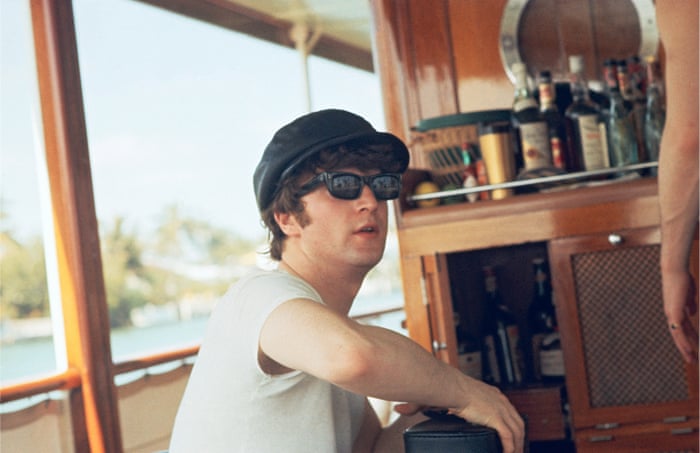 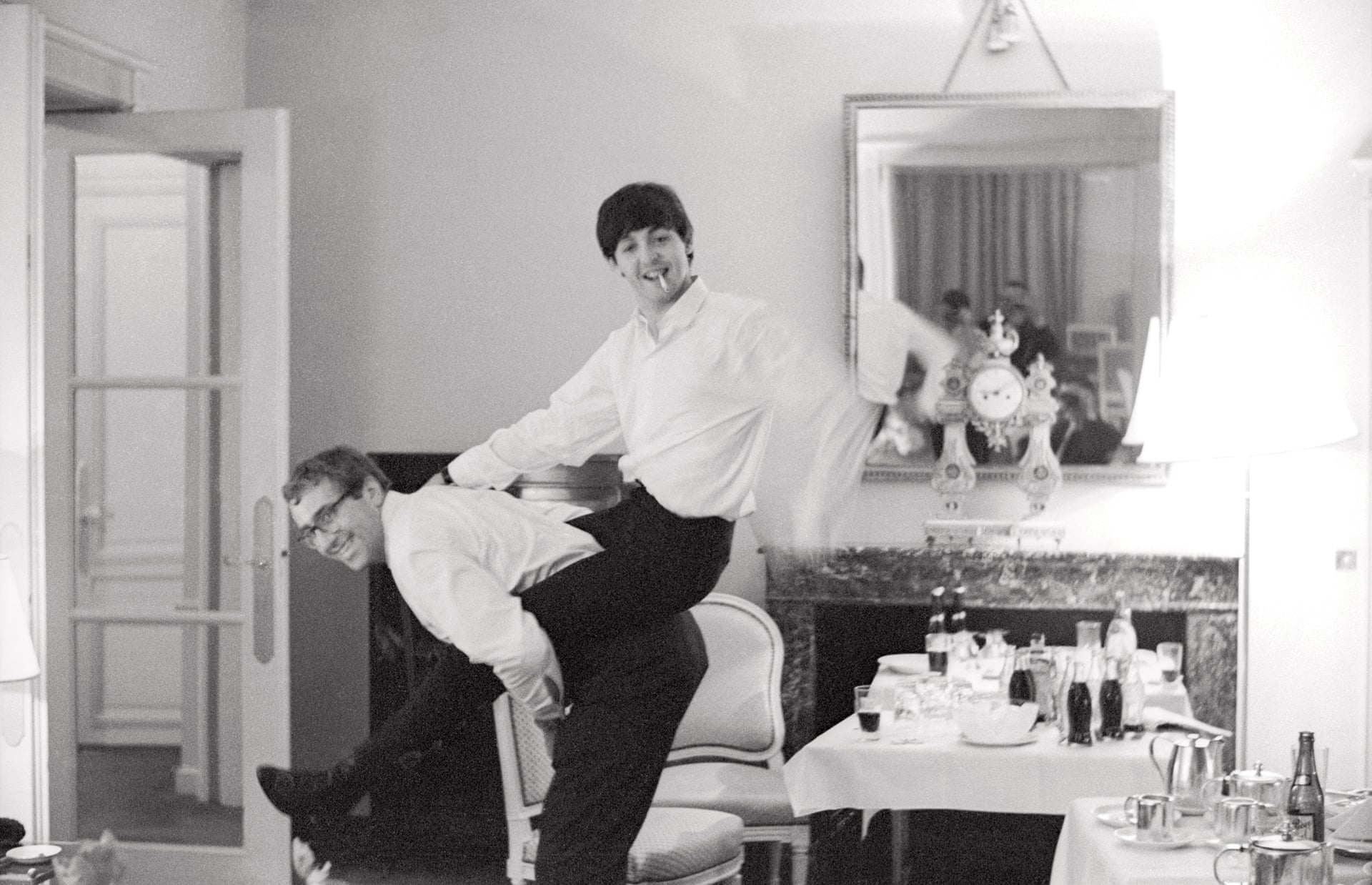 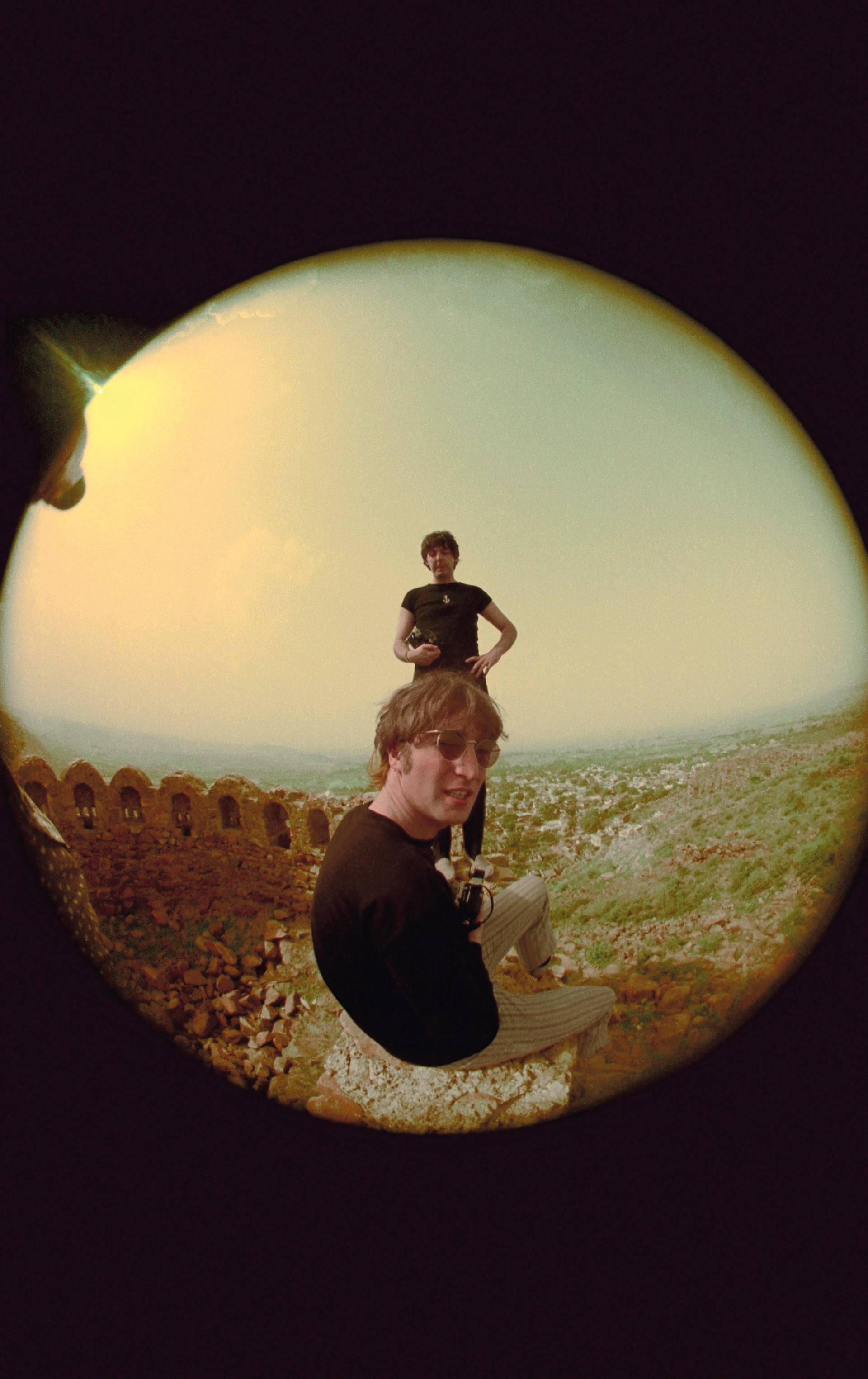 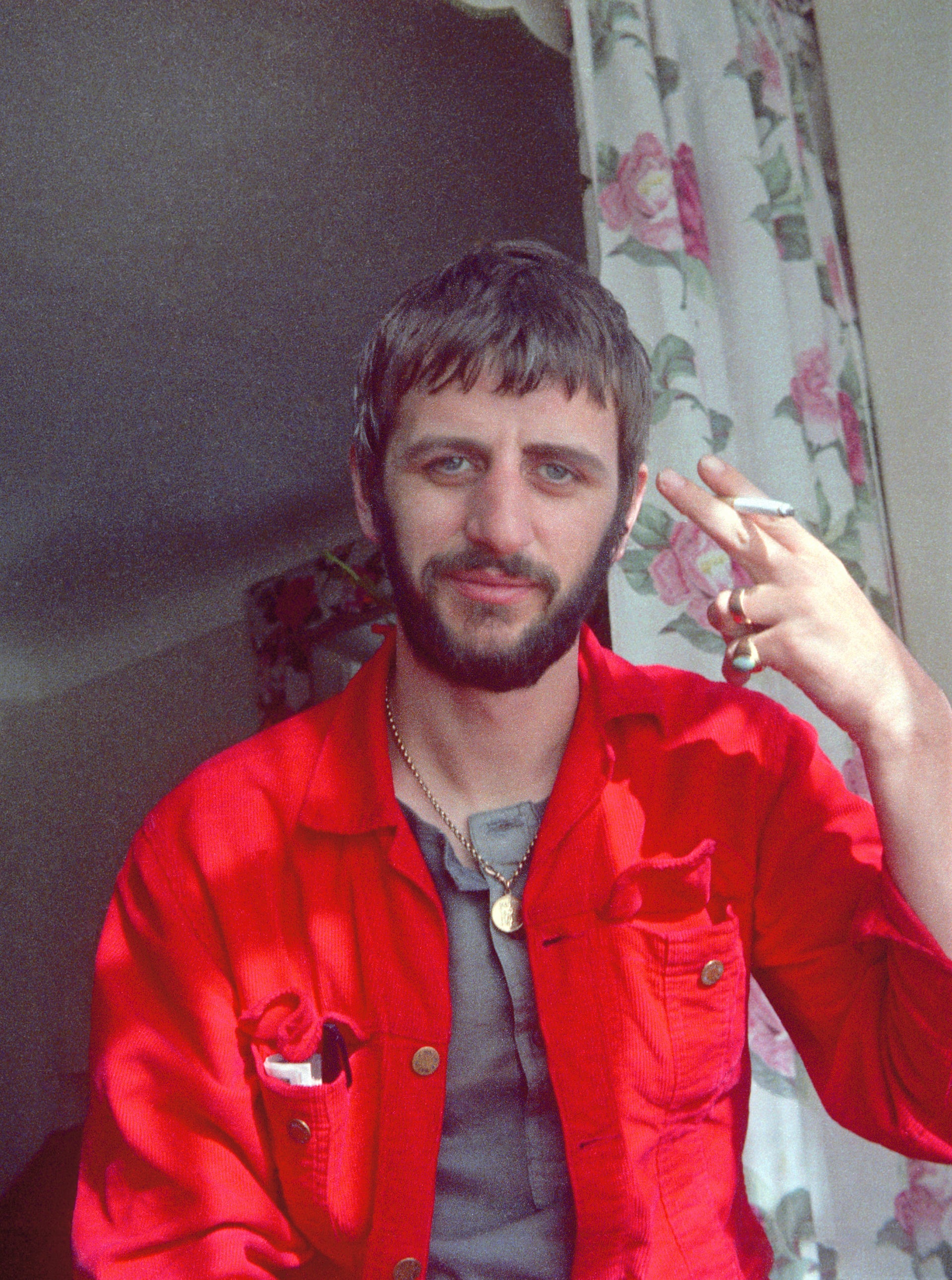 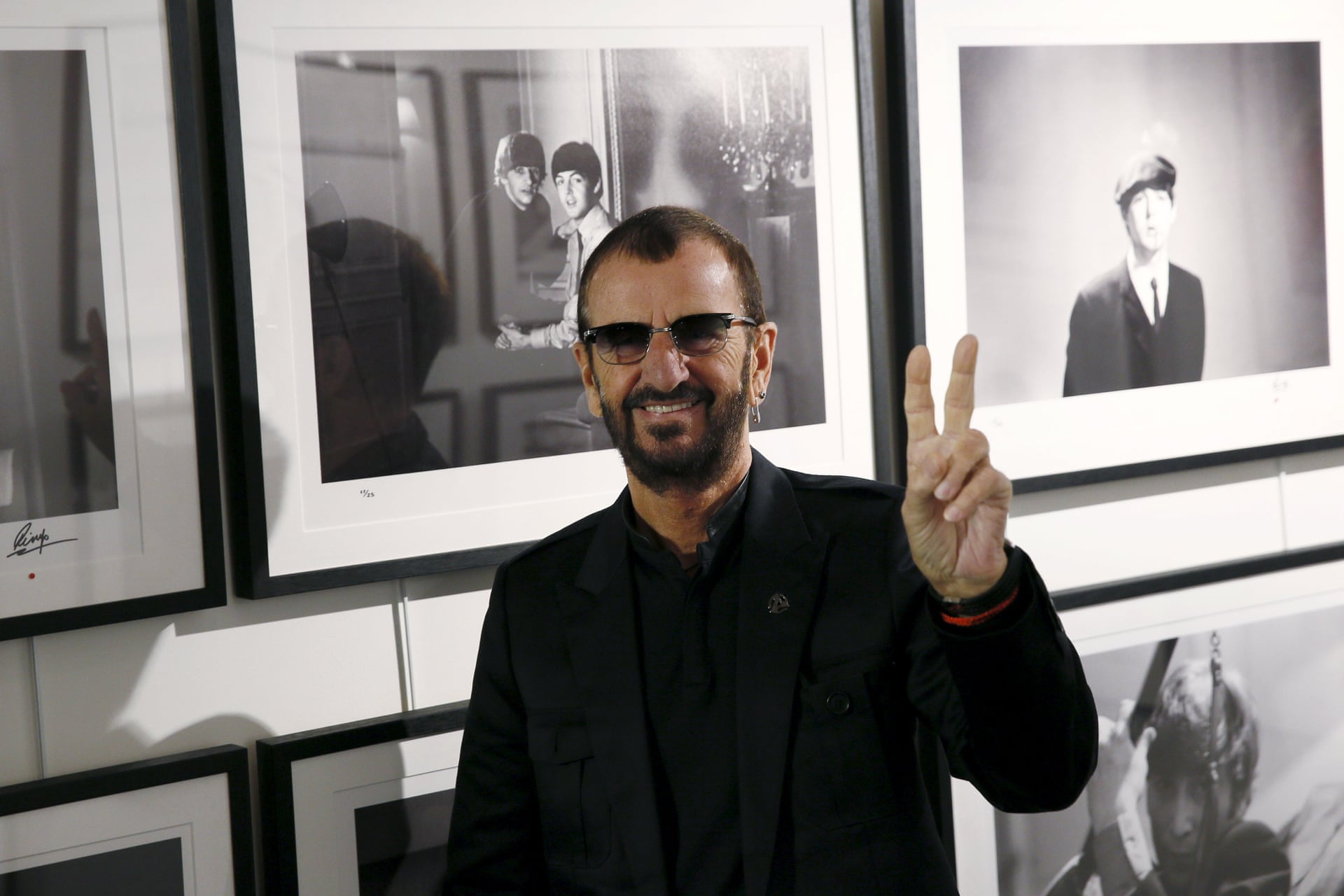 I was wondering when it was going to happen. 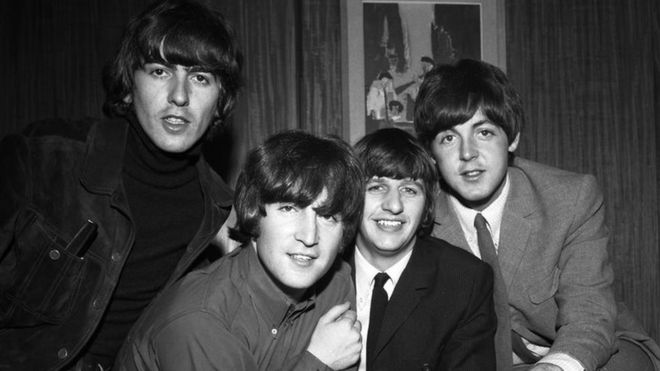 "Spotify, Apple Music, Google Play, Tidal and Amazon Prime Music are among nine services that will offer the band's tracks worldwide.
The group split up in April 1970. However, their songs - including Hey Jude and Yesterday - remain hugely popular and influential.
One expert suggested that the move would help their legacy endure.
"In terms of digital the Beatles have always been quite late to the party - they came to iTunes in 2010, which was a good five years after the iTunes Music Store started gaining momentum," said Chris Cooke, co-founder of the music industry news site CMU.
"We had expected they would probably do an exclusive deal to stream their music with one service, but it looks like instead they are going to be pretty much everywhere from day one.

So, I suppose that is them accepting that streaming is now a very serious, significant part of the record industry."
Other services that have secured the band's catalogue include Deezer, Microsoft Groove, Napster and Slacker Radio."


The deal involves rights to stream 224 songs from the original 13 studio albums released in the UK as well as "essential" collections including Past Masters.
The tracks will be made available from 24 December.

John Lennon, Paul McCartney, George Harrison and Ringo Starr clocked up 17 number one singles in the British charts as the Beatles.

But long after the band broke up they continued to issue songs and compilations, the most recent of which was an expanded edition of Beatles 1 put on sale last month.
"There's a really simply reason why the Beatles catalogue took so long to join streaming services - their publishers didn't want to do anything to damage potential sales of reissues and retrospectives - it's a very lucrative catalogue," said Mark Mulligan from the media research firm Midia.
"But they've waited until the market has got some scale and they could get the best deal.
"It's a big PR catch as it helps communicate that the platforms are 'all the music in the world' - which is the value proposition of streaming services.

It's a White (Album) Christmas. Some of the most enduring hits in pop are coming to a streaming service near you.
The Beatles as a corporate entity have been notoriously slow in adapting to new technology. They waited five years to issue their albums on CD, and didn't talk about the download Revolution until 2010 - seven years after the iTunes store launched.
Their arrival on streaming services comes as consumption on those platforms starts to overtake digital downloads as a source of income for the music industry. The number of songs streamed in the UK looks set to top 25 billion this year, up from 13.7 billion in 2014, according to the Official Charts Company.
It will be interesting to see how the band's music competes against the likes of Justin Bieber - whose latest singles are being streamed almost six million times a week, exerting a firm grip on the top of the charts.
When The Beatles became available to buy on iTunes, the band scored 10 entries into the Top 100 - but the top-selling song (Hey Jude) only reached number 40."

I hope it works for those across the pond......

Here's an interesting thing they've been playing on the local classical station this season--a mash-up of Tchaikovsky and the Beatles:

The footage, entitled Snow Scenes, was taken by the late actor Leo McKern, best known as Rumpole of the Bailey on ITV between 1978-92.

In 1965, McKern was in the Richard Lester-directed film Help! along with the Beatles, playing a cult supervillain called Clang who is after the ring on Ringo’s finger.

A keen amateur photographer and filmmaker, McKern caught the Beatles relaxed and off guard as they prepared to film scenes in the ski resort of Obertauern.
“It is unseen footage of people who were, at that time, the most famous people on earth,” said the actor Neil Pearson, who is also a rare books dealer. “It is footage of golden age Beatles, fooling around between takes, waiting for something to happen ... I know that feeling.”

The film shows the Fab Four being very larky and giggly, pretending to play instruments in a brass band and messing around with their stunt doubles. As John Lennon once admitted, they were “smoking marijuana for breakfast” during that period.

In another interview for the 2000 Beatles Anthology book, Ringo Starr said: “A hell of a lot of pot was being smoked while we were making the film. It was great. That helped make it a lot of fun.

“Dick Lester knew that very little would get done after lunch. In the afternoon we very seldom got past the first line of the script. We had such hysterics that no one could do anything. Dick Lester would say, ‘No, boys, could we do it again?’ It was just that we had a lot of fun – a lot of fun in those days.”

At the start and end of the newly discovered film, there is sweet footage of McKern’s 10-year-old daughter Abigail playing in the snow.

She was very much part of the gang and has memories of being in the Beatles entourage as they left London airport for Austria, walking through the crowds of screaming fans. “Abigail remembers being thrilled and then confused and then frightened because at one stage she was spat at by an apparently jealous fan,” said Pearson.

The film would have been shown to family members when the McKerns returned to London but has otherwise remained unseen, stored away in the garage. It came to light because Pearson had been approached by Abigail McKern, also an actor, to see if he could help disperse her mother’s collection of children’s literature.

“Being the daughter of Leo McKern, there was quite a lot of additional material in the house that was of interest,” said Pearson. “Most of it was books, manuscripts and bits and pieces but there was a reel of film in a case, which had the title Snow Scenes.”

The film also shows the wives and girlfriends of the Beatles relaxing and other actors including John Bluthal and Eleanor Bron, who played Ahme, the high priestess of the cult which requires the sacrificial ring worn by Ringo.

Bron, Abigail McKern and Paul McCartney’s stunt double have been brought together by BBC1’s The One Show, which is due to feature the unseen footage on Friday evening.

Help! was directed by Lester following the success they all had with A Hard Day’s Night. It has a Goons Show-style silliness and a far bigger budget than the first movie, allowing them to shoot scenes in the Bahamas as well as Austria.

The Austrian shoot was about two weeks and even though they all look like they’re having the time of their lives, the band later said they did not enjoy the end result.

Lennon said: “The movie was out of our control. With A Hard Day’s Night, we had a lot of input, and it was semi-realistic. But with Help!, Dick Lester didn’t tell us what it was all about.”

Australian-born McKern, who died in 2002, established a reputation as a fine stage actor in the 1950s before becoming known for his film roles, perhaps most notably as Thomas Cromwell in Fred Zinnemann’s A Man for All Seasons. He will be most remembered, however, as the combative defence barrister in Rumpole of the Bailey, written by John Mortimer.

The unseen 8mm film and its copyright is being sold by Pearson with an asking price of £35,000.