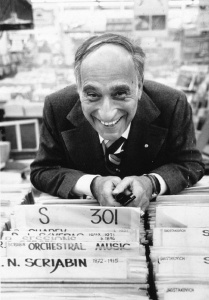 Sam Sniderman, CM (June 15, 1920 – September 23, 2012) was a Canadian businessman best known as the founder of Sam the Record Man, the Canadian record store chain. Sniderman was also a major promoter of Canadian music including involvement in pushing for the Canadian content (CANCON) broadcast regulations and creating the Juno Awards.

Born in Toronto, Ontario, Sniderman grew up in its Jewish enclave known as Kensington Market. He attended high school at Harbord Collegiate Institute and started selling records in his brother Sidney's store, Sniderman Radio Sales and Service, in 1937. In 1959 he opened a second store at his Yonge Street location in Toronto. In 1969, he started franchising the store.

He retired in 2000 and turned over ownership of the business to his sons, Bobby and Jason, and Sid's daughters Lana and Arna. The flagship Toronto store that bore his name closed in 2007 and its distinctive façade was declared a heritage site by the city.

Following the closure, Sniderman expressed his support for Ryerson University's bid to expropriate the Yonge Street property if his children and nieces failed to negotiate a deal to sell the property to the university. In the end, Ryerson reached a deal to purchase the property from the family.

i remember seeing Mose Allison upstairs at The Brunswick House, and him joking that a song he was going to play was available on an album in a remainders bin on the third floor of Sam's
3 Replies
1
Reply Wed 26 Sep, 2012 10:06 am
@djjd62,
Interesting, I never heard of his chain.

You don’t see too many record stores anymore. One of my favorites was Tower Records.

0 Replies
1
Reply Wed 26 Sep, 2012 10:18 am
@djjd62,
I loved going to Sam's. He was a fantastic guy. Supported Canadian musicians - he really changed the industry here. Some of the CBC features on him this past weekend were fantastic - lots of good memories.

A lot of my music/radio friends had part-time jobs at Sam's long after their professional careers started.

we had to have elbowed each other out of the way at least once during the 1980's
0 Replies
1
Reply Thu 27 Sep, 2012 08:09 am
Montreal-born Andy Kim of Rock Me Gently fame, whose relationship with Sniderman stretched back more than 40 years to Kim’s first 1968 album, said Sniderman will be remembered for the personal touch.
0 Replies