Forums: Billboards, Advertisements, Outdoor Advertisements, Morgan Spurlock, Visual Pollution
Email this Topic • Print this Page
Reply Fri 29 Jun, 2012 08:37 pm
I am presently watching the hilarious and highly thought-provoking documentary Morgan Spurlock made titled POM Wonderful Presents: The Greatest Movie Ever Sold. In one segment, it points out the fact the in San Paolo, Brazil, all outdoor advertising (bilboards, taxi and bus covered ads, posters, etc...) is ban from the public view under the concept that outdoor advertisements are visual pollution.

Do you agree with that assessment that outdoor adverts make up too much chaotic clustered enviornment and thusly is a form of pollution? Would you want your city to have a similar ban? What does the general public gain from outdoor advertisement other then potential brand awareness? Yes a certain percentage of billboards are artfully and/or humourously done. Are there other benefits to a cityscape (entire buildings' sides covered, bridges partially eclipsed, rooftops overgrowned with, etc...) filled with outdoor adverts? How effective do you think these billboards are in their mission for sales and brand awareness? Are there too many billboards in your town/city? would a ban be not enough, too much, and can there be some kind of balance made via public policy?
Type: Discussion • Score: 8 • Views: 4,142 • Replies: 8
1
Reply Fri 29 Jun, 2012 09:50 pm
@tsarstepan,
I think it is a trade-off. Billboards distract from the natural scenery but advertising in general and billboards in particular do benefit the general public. By making the public aware of what is available, it spurs competition and helps consumers find lower prices. If you are driving along the Interstate looking for a hotel, you are never going to know about that mom and pop place five miles down the road without advertising so you will likely end up at the first chain hotel you run into. Studies into consumer spending during a newspaper strike showed that without advertising to help consumers understand where the sales were, they ended up paying significantly more for their groceries.
1 Reply
1
Reply Fri 29 Jun, 2012 10:12 pm
@engineer,
I dunno. It seems to me there must be better ways to plug one's product than by uglifying an otherwise lovely landscape with unsightly and onbnoxious billboards. Some of out First Ladies -- Mamie Eisenower and Lady Bird Johnsson come to mind right away -- did some great work in promoting billboard-free highways.
1 Reply
1
Reply Sat 30 Jun, 2012 01:44 pm
@Lustig Andrei,
Yeah, I agree. It's one thing to have ads on TV, for example. It's quite another thing to have ads out in the open in one's face.
0 Replies
1
Reply Sat 30 Jun, 2012 01:48 pm
This popped up down our way recently.

0 Replies
2
Reply Sat 30 Jun, 2012 02:17 pm
@tsarstepan,
I am one of those people who find billboards interesting and occasionally quite artistic and pretty, if not beautiful. We have some very interesting and innovative billboards here in New Jersey…and I find some almost magnificent.

I realize I am an oddball in this.

I might also mention that I find some graffiti gorgeous...so if this kind of thinking is a sickness, I've got a major case of it.

1 Reply
3
Reply Sat 30 Jun, 2012 02:30 pm
@Frank Apisa,
I agree, Frank, that some graffiti definitely rises to the level of folk art, some of it quite impressive. It's the commercial stuff I object to, completely regardless of how creative and artistically interesting it might be. It's where it doesn't belong, that's all.
0 Replies
1
Reply Mon 2 Jul, 2012 12:52 pm
@tsarstepan,
The same logic was used to deter windmills from being planted in a city in IL.

I was driving through Indiana, I saw billboards like "Hell is real!" and "Jesus is real" 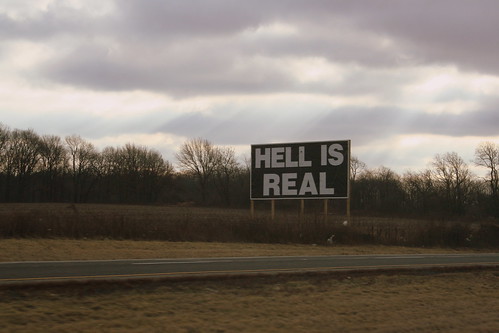 annoyance from billboards does break the monotony of the empty stretches of highway, and keeps me from sleeping behind the wheel, especially if coffee isn't within hands reach.
1 Reply
0
Reply Mon 2 Jul, 2012 01:22 pm
@aspvenom,
That suggests you're going past it. I've never seen anything like that before. It made me laugh, but I guess it's not so funny when you're living in the middle of it.
0 Replies