What is the best book that you have ever read? How did it help you? 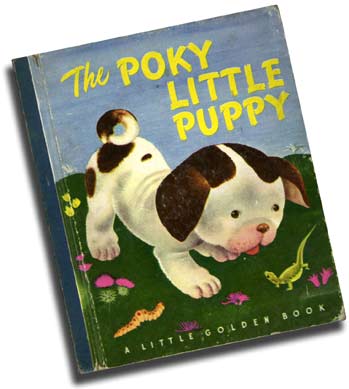 Only at the end of the book does fate catch up with the Poky Little Puppy. When the puppies are sent to bed without dessert a third time, they wait until they think their mother is sleeping, then sneak out of bed and fill in the hole they'd dug under the fence. She sees them doing this and rewards them with strawberry shortcake. The Poky Little Puppy not only arrives too late to get any strawberry shortcake, but is forced to squeeze between the fence boards since the hole has been filled in. The book concludes with Poky Little Puppy going to bed without a bite and feeling "very sorry for himself."
1 Reply
1
Reply Mon 27 Sep, 2010 04:41 pm
@djjd62,
wow djjd what a coincidence. the best book I ever read was;
http://image.casadellibro.com/l/ip/3/9788484372493.jpg
COMEDIES: ARISTOFANES, PLAUTE, SHAKESPEARE, MOLIERE, CARLO GOLDON I, EUGENE LABICHE, OSCAR WILDE, SANTIAGO RUSIÑOL, JORDI TEIXIDOR, R. SIRERA...
of course I read it in the original (arabic) so I suppose it might lose something in translation.

0 Replies
1
Reply Sun 22 Jan, 2012 08:52 pm
@stevenya,
Oh, several but one recently tugged at me for a long time and that was Sebastian Barry's The Secret Scripture. His prose just flows along, is poetic and he speaks in the same way when I heard him interviewed. His storylines are really interesting. I'm also about to read his latest book, "On Canaan's Side" as well. I heard Sebastian interviewed on Studio's The Book Show with Mariella Frostrup. He calls his desk with all the paraphernalia on top, "a strewed mini tsunami". His stone cottage/studio where he writes looks over rolling, green, Irish hills and foliage. Here is a quote from The Secret Scripture :...."Unfathomable. Fathoms. I wonder is that the difficulty that my memories and my imaginings are lying deeply in the same place? Or one on top of the other like layers of shells and sand in a piece of limestone, so that they have both become the same element, and I cannot distinguish one from the other with any ease, until it is from close, close looking ....." The character in the book was Roseanne McNulty and she is looking back over her past as an old lady in an institution placed there when young for no good reason. The secret scripture is her diary and the story goes from her diary to her psychiatrist's musings all the way throughout the book.
0 Replies
1
Reply Fri 27 Jan, 2012 10:01 pm
@stevenya,
I personally dont' hold to a 'best book I ever read', particularly when making reference to the non-fiction kind. And that in itself is a whole subject. Personally, for me - I get bits and pieces of a puzzle from books.
0 Replies
1
Reply Fri 30 Mar, 2012 12:44 am
@stevenya,
Tao Te Ching of Lao Tzu. 3000 years old and still considered by many to be the wisest book ever written. I am one of said many.
1 Reply
-1
Reply Fri 30 Mar, 2012 11:46 pm
@bulldogcoma,
I read that book. TROLL.
1 Reply
1
Reply Sun 1 Apr, 2012 03:28 am
@demonhunter,
Never had an internet stalker before. Cute.
0 Replies