Forums: Lighthouses, Photography, Blog, Travel, Photos
Email this Topic • Print this Page
2
Reply Tue 12 Nov, 2019 03:24 am
@farmerman,
The islands of Heligoland (in German Helgoland without the "i", meaning "Holy Land") are the only German islands not in the vicinity of the mainland. (46 kilometres [25 Nm] off the German coastline.) 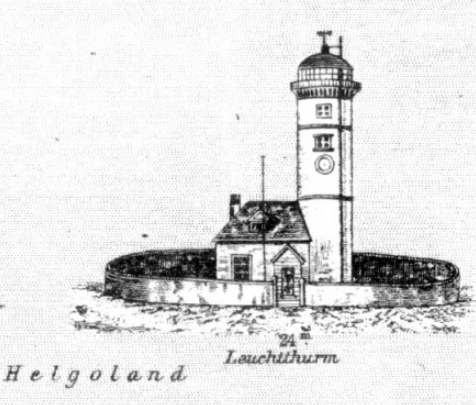 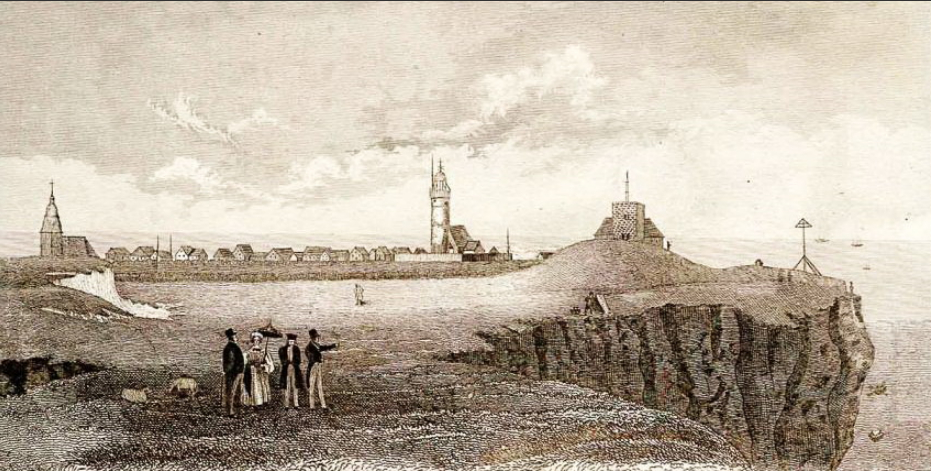 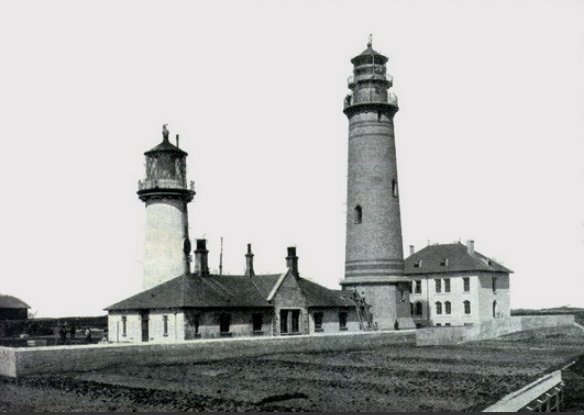 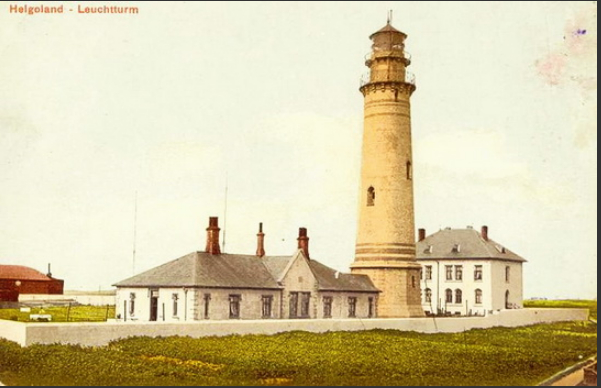 The islands became German in 1890, a new lighthouse was erected in 1902.
(During a short time, both lighthouse were working, since they didn't know, if the new one would work properly.) 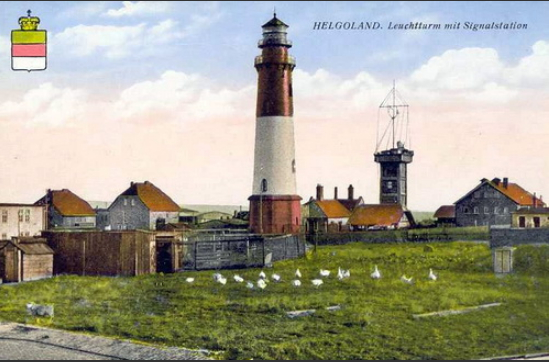 Later, around 1930, a signal station was built next to the lighthouse - that was used during WWII as an anti-aircraft artillery tower. [As an aside: the German airforce stationed at Heligoland during the war was equipped with a rare version of the Messerschmitt Bf 109 fighter originally designed for use on aircraft carriers.]

1 Reply
2
Reply Tue 12 Nov, 2019 03:26 am
@Walter Hinteler,
The island was heavily bombed during the war.
After the occupation by the British the island was further destroyed by a large blast on 18./19.04.1945 and then uninhabitable as a bombing ground. 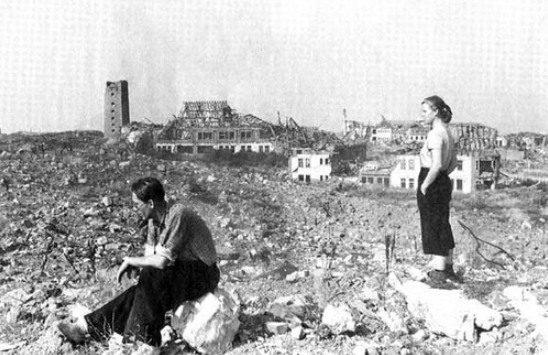 The lighthouse and the lighthouse yard were levelled to the ground. Only the old signal tower remained somewhat preserved.
The lighthouse, built in 1902 by the Royal Prussian Building Administration, was destroyed by a bomb hit. 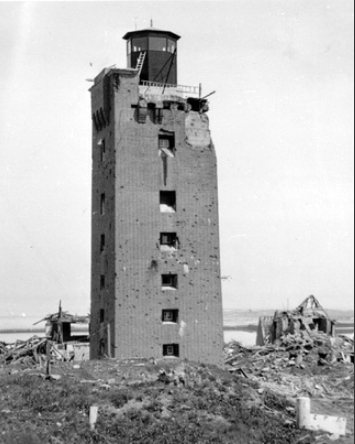 In 1952, a new light was installed on top of the signal/gunnery tower.


1964, the new lighthouse was completed 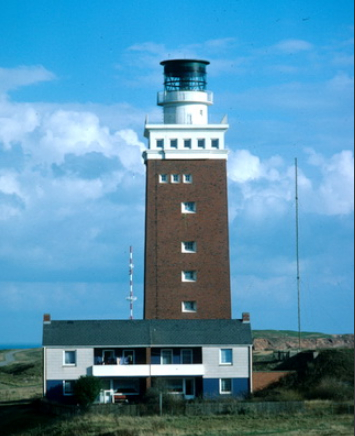 More changes were done the following years (the tower became a naval signal station over a longer period, too) 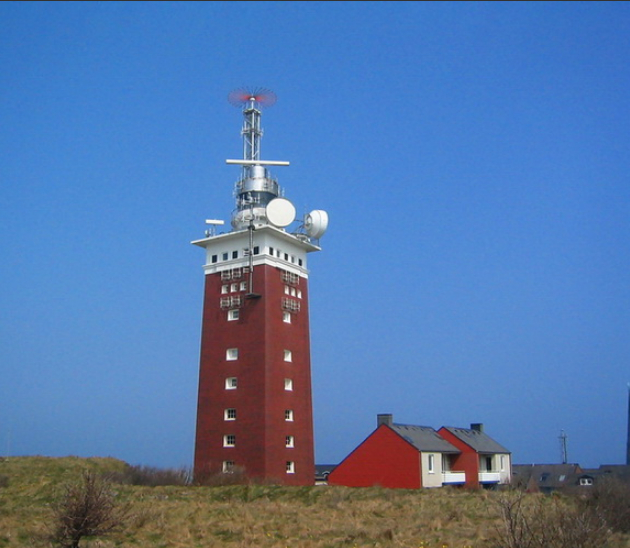 Position: 54°10,91'N, 007°52,94'E
Identifier: Fl.W.5 s
Nominal TW: 28 M
Height above water: 82 m
Height above ground: 34 m
Data: Red-brown, square tower, white tower head and antennas.
1 Reply
1
Reply Tue 12 Nov, 2019 01:22 pm
@Walter Hinteler,
From Germany's only lighthouse in the "high sea" to the most eastern one in the Baltic Sea.
Greifswalder Oie is an small island, about 1,550 metres long, a maximum of 570 metres wide and, at the cliffs on its eastern side, a maximum of 19 metres high. It is about 12 kilometres off the shore of Usedom and belongs administratively to the municipality of Kröslin on the mainland. 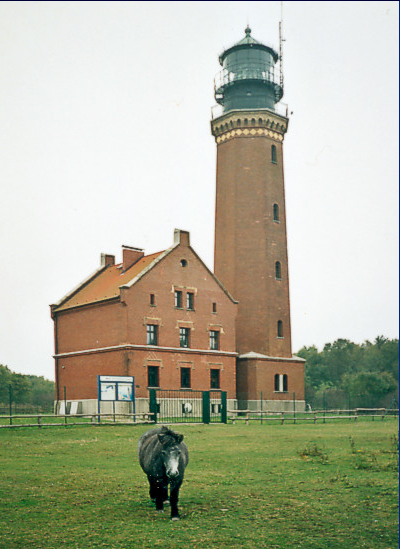 On the island, with its striking steep coast, is a 49 metre high lighthouse with one of the strongest beacons in the Baltic (range of light 26 Nm).
The optic of the lighthouse Greifswalder Oie is one of the rare left-turning at the German Baltic coast. Also the spiral staircase is left-turning. 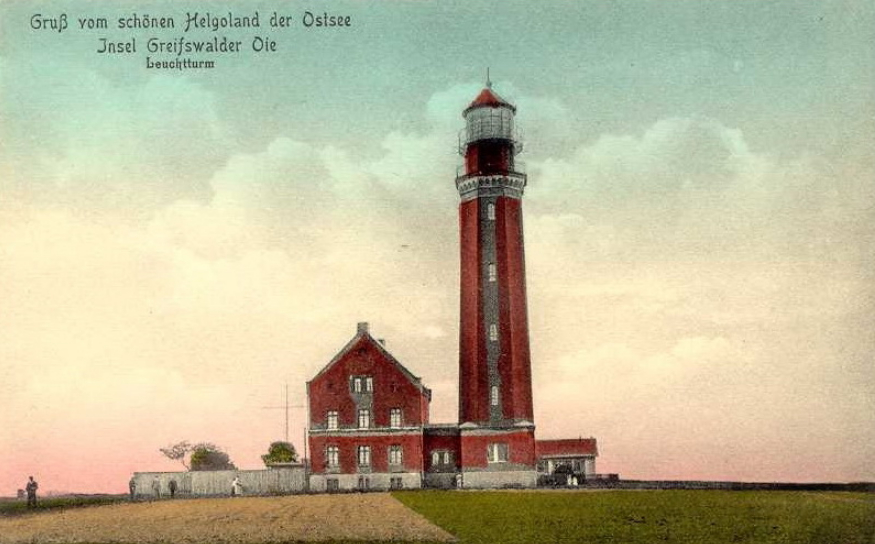 This postcard is from around 1900. The text reads: "Greetings from the beautiful Heligoland of the Baltic - Greifswalder Oie - Lighthouse".
1 Reply
1
Reply Thu 14 Nov, 2019 08:43 am
@Walter Hinteler,
First illuminated on this day 321 years ago, the historic Eddystone Lighthouse is celebrated in today’s Google Doodle.

The lighthouse was immortalised in Herman Meville’s iconic seafaring novel Moby-Dick – “How it stands there, away off shore, more lonely than the Eddystone lighthouse” – and a well-known sea shanty “My father was the keeper of the Eddystone light/And he slept with a mermaid one fine night”. 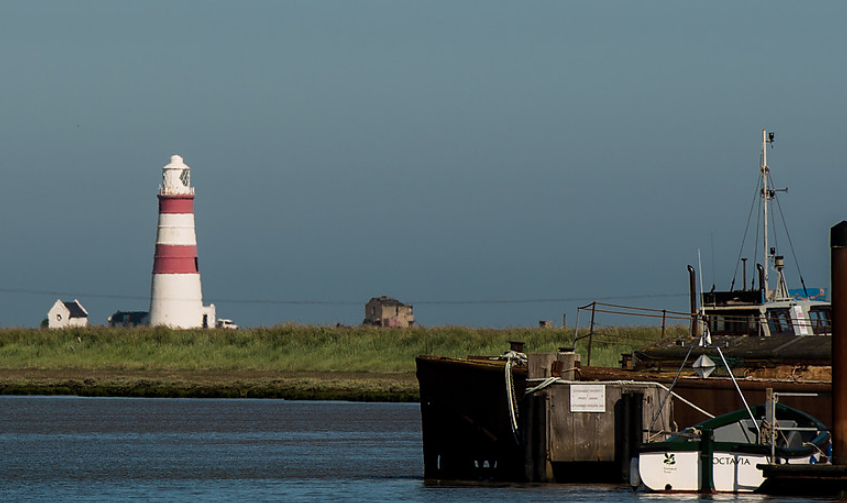 Orfordness lighthouse (Suffolk, England) is was situated at the end of a 13 mile spit which runs parallel to the coast. The lighthouse is was on an old military testing site which is now owned by the National Trust. 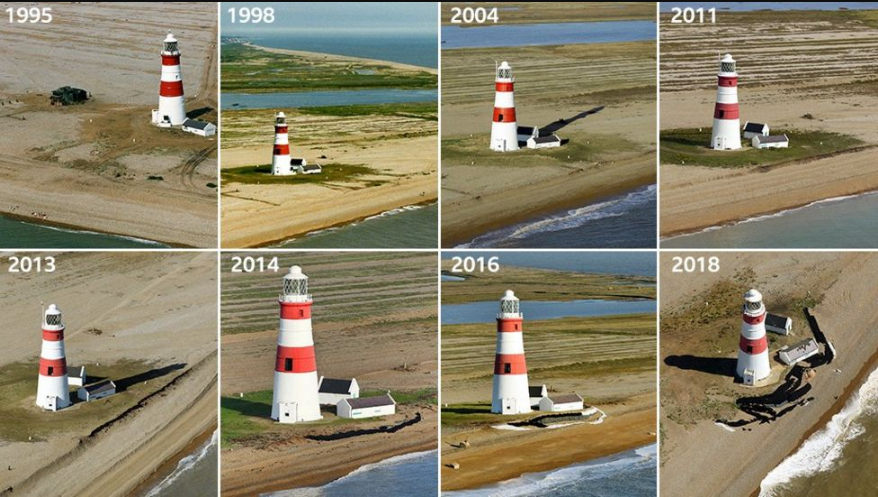 It took a pounding in 2018's "Beast from the East" storms, and the sea was now just a few metres from the imposing red and white structure. 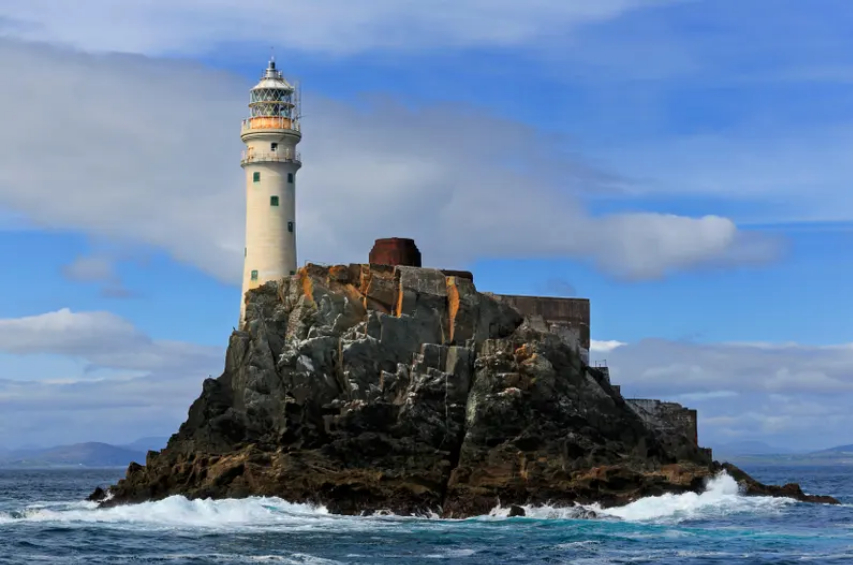 The “loom of the light” is a phenomenon that lets you see the glow of a lighthouse from over the horizon. Particles of water vapour in the atmosphere scatter the light upwards so it can be glimpsed further than the line of sight. It is an optical wonder that has delighted – and guided – mariners for centuries.

But now some fear an environmental push towards low energy will extinguish a loom that stretches across the Irish Sea, draining beauty from the nocturnal landscape.

Campaigners say that the Commissioners of Irish Lights, a cross-border body that manages lighthouses in Northern Ireland and the republic, is on the verge of vandalising St John’s Point, a masterpiece of Victorian engineering that towers 40 metres over a rocky headland in County Down.

The agency wants to install low-power LED lights at St John’s Point and six other automated lighthouses to save energy. It also wants, on safety grounds, to remove liquid mercury, which helps rotate lenses that weigh several tonnes.

Other countries are making similar changes. Trinity House, which manages lighthouses in England, Wales, the Channel Islands and Gibraltar, has converted 20 out of 66, and said it would continue to fit LED lamps “where required”.

The Northern Lighthouse Board, which maintains 206 lighthouses and 167 buoys in Scotland and the Isle of Man, said 125 of its sites had LEDs as the primary light source, and that there had been no opposition to them.

Residents in County Down, however, have rebelled. In the past five years, they have used roadblocks, forged an unusual political alliance and appealed to celebrities and royalty to stave off change to St John’s Point, built from 1839.

“It doesn’t represent progress,” said campaigner Eileen Peters. “The most important objection is the reduction in the quantity and character of the beam. It’s part of our heritage, the quality of our beautiful light. It just shows what philistines they are.”

The campaign includes fishermen, conservationists, the Sinn Féin MP Chris Hazzard and unionist and nationalist members of Newry, Mourne and Down district council.
[...]
The change would be positive, said McCabe. Mercury was a risk to human health and could be safely replaced with a mechanical bearing that supported the original lenses. And LED lights used 30 watts compared with 1,000 for traditional lamps, slashing energy use and allowing batteries to replace diesel generators as back-up energy sources, he said.

The new LEDs would shorten the St John’s Point beam from 25 miles to 18 and give a blue-white tinge to the light, but there would still be a loom, said McCabe. “In reality it’s very little change. The light picking up moisture in the atmosphere, like searchlights in war movies – none of that will change.”

Gerald Butler, a retired lighthouse keeper whose father and grandfather also tended lighthouses, approves of the change. Lighthouses had always adopted new technology, changing from beacon fires to candles, sperm whale oil and paraffin, he said. “LED is no different. Out at sea you will see the light, which is what matters.”

Campaigners disagree. They insist LEDs will kill the loom and that the existing system works fine – safe, low maintenance, filling the night with a light like no other.

LEDs, in contrast, were ugly and less effective, said Hugh O’Donnell, who helped his lighthouse keeper father operate St John’s Point during the 1960s. “LED is too damn harsh and it doesn’t have the penetration range of the old light. Shorter range, different colour, harder to look at – it’s a mistake.” 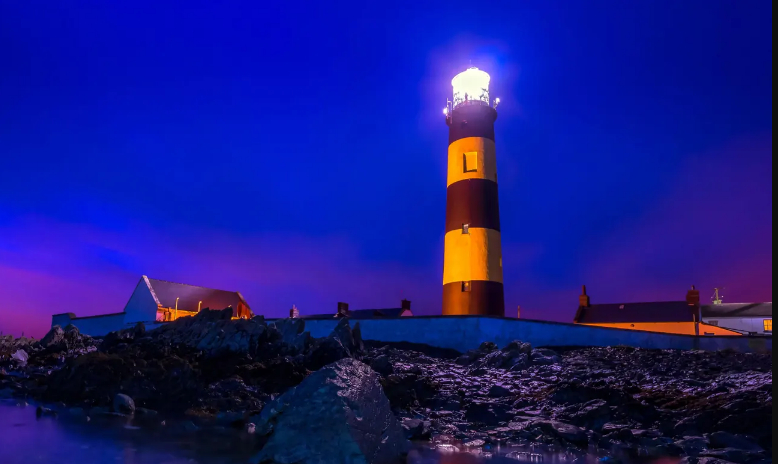 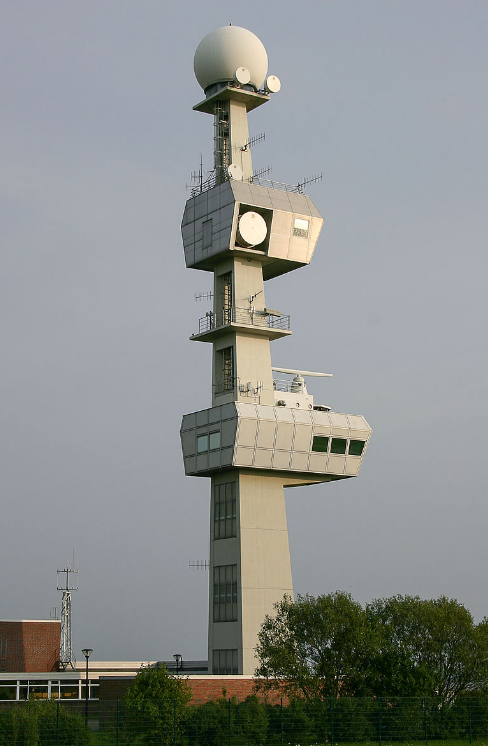 Lighthouse Knock (river Ems, Germany/The Netherlands), serves as a beacon, as weather radar, radio tower and as the 'German-Dutch Vessel Traffic Control Centre Ems'.
1 Reply
1
Reply Wed 17 Feb, 2021 09:41 am
@Walter Hinteler,
1 Reply
2
Reply Wed 17 Feb, 2021 10:39 am
@tsarstepan,
From 1822 onward, Fresnel lenses shone along the coastlines of Europe
Despite the clear superiority of Fresnel lenses, the parsimonious bureaucrat in charge of federal lighthouses, Stephen Pleasanton, considered the cost prohibitive. Finally, the uproar became so great that in 1838 Congress launched an investigation. It was not until then that Congress coughed up the cash to import a few Fresnel lenses. The first were installed in 1841 inside the two towers at Navesink Lighthouse, overlooking the approach to New York Harbor.

Only after 1852, when the United States created a Lighthouse Board made up of eminent scientists and mariners, including Joseph Henry of the Smithsonian and Alexander Bache of the U.S. Coast Survey, did the great lenses really begin to light America's coastline. By the Civil War, nearly all lighthouses in the United States had Fresnel lenses.
(Source: Fresnel Lens ....... History & Facts


1 Reply
2
Reply Wed 17 Feb, 2021 10:46 am
@Walter Hinteler,
The Phare du Créac'h (Kreac'h lighthouse or Créac'h lighthouse), a lighthouse in Ushant, France, is the most powerful in Europe and with a range of 32 nautical miles (just under 60 km resp. 39 miles) one of the strongest in the world. 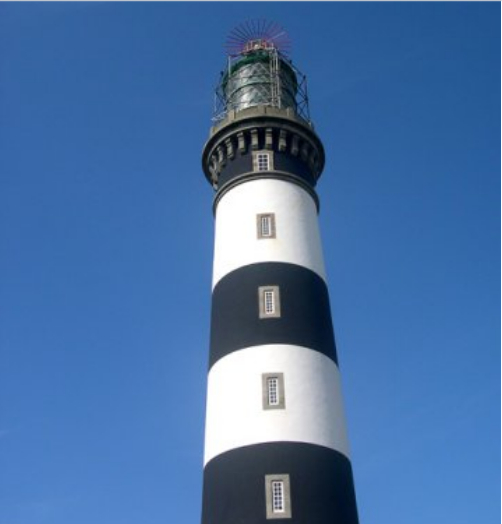 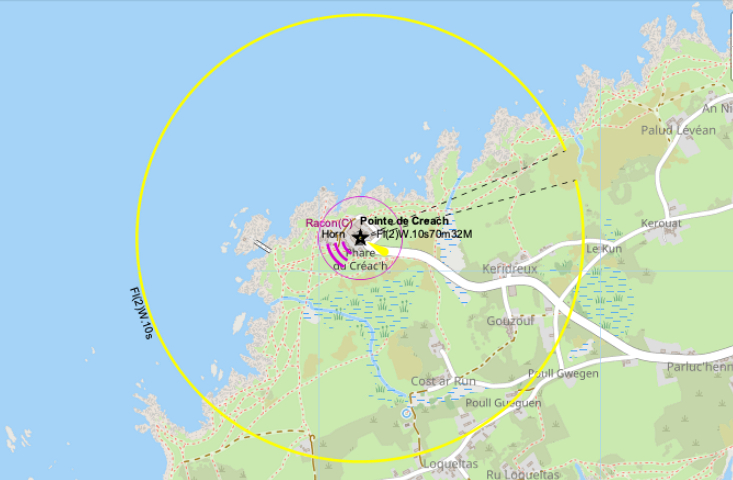 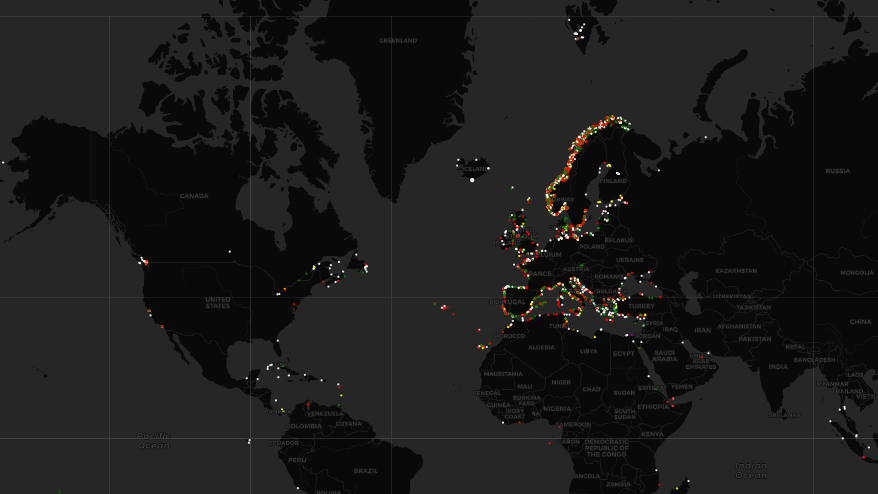