I can't, they caption hardly anything.


We are "cop rock" we are screech
We are z. cavaricci
We are laser removed
Tasmanian devil tattoos

I joke with my friends and use this sound a lot. I guess it's a sort of audible response of sarcasm.

For instance, I remember a friend complaining about having too many fun options to pick from on her evening. Her roommate replied "Poor baby. Life sounds hard. wah wah." It wasn't meant to be mean, just as a friendly poke to her saying that if you're going to have a problem, she had pretty good problems.

Soz, if you want to try it out. The next time ican or Fox is talking about wealth redistribution, reply with something comparible to the following.

"You poor thing. You must be starving. wah wah."

It sounds like you're describing the sound made by a trombone or trumpet, often with a mute (sometimes called a "wah wah mute"), where the first note is followed by a note that is one tone lower. It is found in bad comedies to indicate irony or disappointment.


This is what I was going to say. Imagine that, joefromchicago and I thinking the same. What's next?


That's "wah wah wah wah." Same idea, just the unabridged version.
0 Replies
1
Reply Wed 14 Oct, 2009 12:26 pm
Old school Sesame Street would use that sound a lot in many of their skits, especially the Bert & Ernie ones.
1 Reply
1
Reply Wed 14 Oct, 2009 12:32 pm
@InfraBlue,
Oh, that rings a bell! Like Bert looking grumpily at the camera after Ernie did something especially irritating. 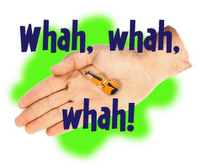 Picture this: Your boss's boss peaks his head in the door of the office you are sitting in and he says. "I'm going to waa waa, do you want anything?" I look at him a bit confused. Did he just ask me if I wanted anything from the bathroom?

You see I had never heard of Waa Waa the popular convienience store so yeah it was a WAH WAH moment for me! (hehehehe)
0 Replies