Forums: Food, Mold, Cheese, Health, Cheese Mold
Email this Topic • Print this Page
Reply Mon 27 Jul, 2009 08:55 am
Yesterday, as is typical, I got out some crackers and some cheddar cheese, the lady Diane said "don't eat that cheese, it's got mold on it". I proceeded to (more or less) trim of the obvious mold and continue with my afternoon sack. Lady Diane was aghast. What's the deal here, is cheese mold a problem? will I die? I've never avoided eating cheese just because it was moldy.
Type: Discussion • Score: 15 • Views: 13,009 • Replies: 40
No top replies
1
Reply Mon 27 Jul, 2009 09:05 am
@dyslexia,
I do the same thing - but only for myself. I just cut some mould off some bread and ate it with pate that I forgot about and left out in the car overnight- so I'm taking a double chance - the moldy bread and the pate that ideally should have been refrigerated. But I toasted the bread - effectively heating it and killing bacteria germinating from the mould (maybe) and I also figure that people have been eating pate for a very long time and only in comparatively recent years have had refrigeration, so I'm reasoning that I probably won't get sick due to that fact and also the fact that I know I have a very strong constitution.

I wouldn't take the same chance with my kids or other people (particularly those of whom I know little about their constitution).
2 Replies
1
Reply Mon 27 Jul, 2009 09:07 am
@dyslexia,
I cut away the molded part and eat what's left and I am still alive so it can't be all that bad

Recently we received some questions from Australia on why eating food contaminated with mould is dangerous. We have posted the questions here together with our brief answers.

Q. Can you still eat food once you chop the mould off?

A. It is risky to eat food that is already contaminated with visible mould. As mould grows it tends to produce by-products (secondary metabolites) that permeate into the food or material it is growing on. Some strains of moulds such as those belonging to Aspergillus, Penicillium and Fusarium produce metabolites that are highly toxic.

Q. If there are foods you can eat after chopping mould off, what are they?

A. I would not recommend eating of any food that has previously been contaminated with mould because the person eating the food may not be knowing which mould is contaminating the food and whether the mould has produced toxins.Penicillium growing on a sandwitch

Q. What kind of moulds are unsafe to eat? Why?

A. All moulds are generally unsafe to eat. However, the risk is higher if one is to eat those moulds known to produce toxins (the so called toxigenic moulds). Some examples of toxigenic moulds commonly found on food are species of Aspergillus, Penicillium and Fusarium. Some species of these moulds are known to produce highly toxic metabolites. A good example is Aspergillus flavus which produces Aflatoxin. Recently aflatoxin killed 125 people in Kenya after eating contaminated maize.

Q. What are the conditions that are best for producing the toxins in toxigenic moulds?

Q. If mould is present on food, does this necessarily mean that bacteria causing food poisoning is also present?

A. If mould is present on food, this does not necessarily mean that bacteria causing food poisoning are also present.

Q. What are some of the symptoms that can be caused by eating toxigenic moulds? Are any fatal?

A. Symptoms of mycotoxin poisoning may depend on the root of entry into the body.

Severe poisoning can lead to death. Some Mycotoxins such Aflatoxin can also trigger cancer.

A. There are no ‘safe’ moulds to eat. However, some moulds including some that are known to produce toxins have been used for many years in production of fermented food. Quorn is a high protein fungal product produced from a species of Fusarium. It is used as an alternative to animal protein.

Q. Can you mistake bacteria for mould? ie. do any look similar to the naked eye?

A. Bacteria and moulds are totally different organisms. Their cell structures are different. Their mode of growth is different and therefore easy to differentiate.

I also found this: (about heat killing bacteria)

Can mould on bread be killed with heat so it's safe?
No. Once molded, throw it away.

To add a little detail... yes, you can kill the mold, but that won't make it safe. The mold produces substances that are toxic to us, so even if the mold is dead, you don't want to eat it. I don't know if this is a strategy the mold has evolved for keeping all of its food for itself, or if it's just that way.

0 Replies
1
Reply Mon 27 Jul, 2009 09:59 am
@dyslexia,
friend of mine from Vermont sent me some kick-ass fancy sharp cheddar, and the instructions sent by the cheesemaker said to trim the mold and eat the cheese should you be a slow cheese eater.

(course Vermont is kinda weird in it's own right, now that I think about it...)
1 Reply
1
Reply Mon 27 Jul, 2009 10:21 am
@dyslexia,
When I was a kid, I saw a tv program with photos of mold growing down through cheese. Eeuw. So, I never ate that cheese.
Years later, it dawned on me that those photos were via microscope, and the layer was fairly thin.
So, I've cut the mold off ever since, unless the scene is a total gross out.
Some cheeses, of course, utilize mold in their production for flavor..

After reading Aidan's link, I'd not advise anyone else to eat their mold-cut-off cheese, but I'll keep doing that myself.


s
0 Replies
1
Reply Mon 27 Jul, 2009 10:25 am
@Rockhead,
I had mold on my cheddar cheese from Cabot. I wrote them note explaining how I just bought my cheese and it was already moldy. They explained that all you have to do is cut off the mold - cheese itself is aged or some such explanation, but for cheese this is supposed to be ok - they also suggested to re-save it in tightly sealed wrapped as any air that gets to it could cause moldiness.
2 Replies
1
Reply Mon 27 Jul, 2009 10:28 am
@Linkat,
those would be the cheesemakers.

(air is not your friend, 'cept when you are breathing, of course) 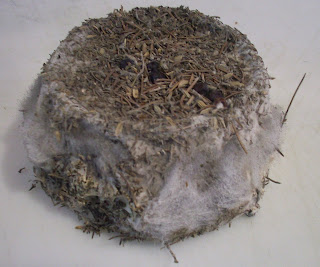 0 Replies
1
Reply Mon 27 Jul, 2009 11:08 am
The best cheese comes with mold. The claims (that Dys alluded to) that people who eat it won't die are probably exaggerated... but is certainly part of a life worth living.

Why did my cheese mold before the sell-by date?
Cabot makes a completely natural cheese without preservatives or chemicals, thus surface mold is occasionally found on the cheese. Airtight packaging is generally a satisfactory means of preventing mold.

However, when the package seal is broken or otherwise compromised, air may enter the package and the chances of the cheese molding are greatly increased, regardless of the sell-by date. Simply trim off any surface mold, seal the cheese in fresh plastic wrap and store it in your refrigerator. Mold that grows on cheese is harmless.
0 Replies
2
Reply Mon 27 Jul, 2009 11:12 am
And according to a more medical point of view :

If a piece of cheese has mold on it, should I throw the cheese away or can I cut off the moldy part and eat the rest of it?
Answer
from Katherine Zeratsky, R.D., L.D.
The answer depends on the type of cheese. Molds are microscopic organisms that have thread-like roots that burrow into the foods they grow on. Most molds are harmless. Molds are even used to make some kinds of cheese, such as Roquefort, Gorgonzola, Brie and Camembert. These molds are safe to eat.

But mold on cheese that's not part of the manufacturing process can also harbor harmful bacteria, such as listeria, brucella, salmonella and E. coli. With hard and semisoft cheese, you can cut away the moldy part and eat the rest of the cheese. Keep the knife out of the mold itself so that it doesn't cross-contaminate other parts of the cheese. Cut off at least one inch around and below the moldy spot. With soft cheeses, however, the mold cannot be safely removed so they should be discarded. The same goes for any cheese that's shredded, crumbled or sliced.

Cut off at least one inch around and below the moldy spot. With soft cheeses, however, the mold cannot be safely removed so they should be discarded. The same goes for any cheese that's shredded, crumbled or sliced.

I never do that, I might, at most, use a knife to mostly scrape off the majority of the mold (cheddar cheese) and eat as usual as did my mother and my grandmother.
1 Reply
1
Reply Mon 27 Jul, 2009 11:21 am
@Linkat,
I pretty much follow the process as described by that Mayo Clinic link.
0 Replies
1
Reply Mon 27 Jul, 2009 11:25 am
@dyslexia,
My grandmother would have yelled at us (or worse) if we had even suggested that moldy cheese couldn't be eaten. She would lecture us about living through the depression and about how we kids these days don't value what we have.

2. I used to eat bread after cutting mould off, until somebody told me that the green mould you can see is just the visible part (the "flowers") and there are zillions of tiny filaments that grow through the bread (the "roots"). I do not know if that is true but it put me off. I believe the spores are so common that we must breathe thousands in every day.

Er, I am no Lister or Pasteur, but I think that bacteria and mould are different? My mother says "They are all germs!"