Michael Steele's 'off the hook' campaign 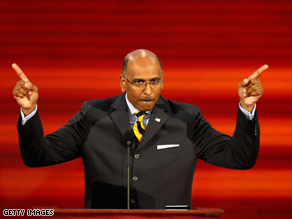 Steele plans an agressive PR push for his party.


(CNN) " Republican National Committee Chairman Michael Steele says his party is going to launch an "off the hook" public relations campaign that will update the GOP’s image by translating it to "urban-suburban hip-hop settings."

The new GOP leader told the Washington Times that the party’s defeat in states such as North Carolina and Virginia made it clear they needed a new approach.

“We need messengers to really capture that region " young, Hispanic, black, a cross section…” he said in an interview published Thursday. “We want to convey that the modern-day GOP looks like the conservative party that stands on principles. But we want to apply them to urban-surburban hip-hop settings.”

He added, jokingly, that “we need to uptick our image with everyone, including one-armed midgets.”

Steele described the new multi-platform PR offensive as “avant-garde, technically. It will come to [the] table with things that will surprise everyone " off the hook.” Asked whether that meant cutting-edge tactics, Steele demurred. “I don't do 'cutting-edge,’” he said. “That's what Democrats are doing. We're going beyond cutting-edge.”

Steele, who began a massive personnel overhaul at the RNC shortly after his election, said he has started meeting weekly with congressional Republicans. He said he’ll be gathering input from House and Senate leaders, not giving instructions " but he criticized national Republican leadership’s focus on party unity as a top priority, saying the failure to devote itself instead to developing fresh faces had cost the GOP.

“We missed the mark in the past, which is why we are in the crapper now,” he said. “We had the White House, the Senate and the House and were not building a farm team over the last years. We could have been ahead of Democrats and their 50-state strategy.”

Steele dismissed the assessments of some Republicans that he needs a deputy to handle areas like logistics, fundraising and candidate recruitment. “I can run this organization just fine,” he said. “There will be no deputy chairman, period. …People who said I can't make the trains run on time never gave a reason. I say to them, 'Stuff it.'

“I am not afraid of being held accountable for my leadership,” he said. “The idea I am somehow going to handicap myself before I begin is nuts. I am not going to buy into this mind-set among a few people who probably have never run anything but their mouths.”

This isn't The Onion?


No. I think it may surpass the Onion though if this ever comes to fruition.