Otto the Octopus is My Hero

Forums: Animals, Octopus, Humor, Funny, Humour
Email this Topic • Print this Page
Reply Wed 18 Feb, 2009 06:19 pm
This story, a couple of months old already, just gets more bizarre the further in you get...

Basically, the staff at the Sea Star Aquarium in Coburg, Germany, had been baffled when several times in a row, there was a short-circuit after a lamp over one of the acquaria broke at night.

A spokesman explained: "It was a serious matter because it shorted the electricity supply to the whole aquarium that threatened the lives of the other animals when water pumps ceased to work."

So they decided to take shifts sleeping on the floor to find out what caused the mysterious blackouts. And "it was on the third night that we found out that the octopus Otto was responsible for the chaos." Apparently, Otto was "annoyed by the bright light shining into his aquarium":

We knew that he was bored as the aquarium is closed for winter, and at two feet, seven inches Otto had discovered he was big enough to swing onto the edge of his tank and shoot out the 2000 Watt spot light above him with a carefully directed jet of water. 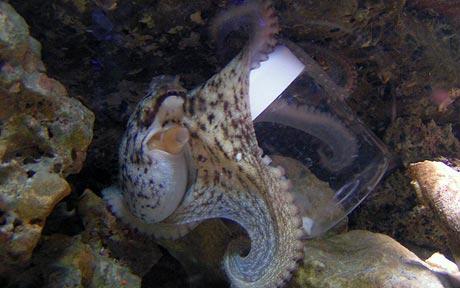 The culprit of the smashed glass and broken lamp is two foot seven inch Otto.

But that's not all!

Director Elfriede Kummer who witnessed the act said: "We've put the light a bit higher now so he shouldn't be able to reach it. But Otto is constantly craving for attention and always comes up with new stunts so we have realised we will have to keep more careful eye on him - and also perhaps give him a few more toys to play with.

"Once we saw him juggling the hermit crabs in his tank, another time he threw stones against the glass damaging it. And from time to time he completely re-arranges his tank to make it suit his own taste better - much to the distress of his fellow tank inhabitants."

(I ate octopus once at a sushi bar. Once was enough.)

(I ate octopus once at a sushi bar. Once was enough.)

Ya musta got some bad/tough octopus, Green Witch. Ya can get bad steak, bad tofu, bad anything.

1 Reply
1
Reply Thu 19 Feb, 2009 06:16 pm
@JTT,
I think my octopus days are over.
I like wasabi peas, but otherwise it's not a favorite. Given a choice of foods, I would probably aim for Italian first, French second, American-Chinese third, German fourth and somewhere after hot dogs I'd go for Japanese. It's probably the most beautiful food on the planet, but does little for me in the way of pleasing my taste buds. Plus, as environmentalist, I have a problem with the Japanese attitude towards ocean plunder.
1 Reply
1
Reply Thu 19 Feb, 2009 06:36 pm
@Green Witch,
Been there, done the western versions of Japanese food, GW. That's not really Japanese food. My guess is that shiokara, salted fermented squid guts, wouldn't be big on your list.


1 Reply
1
Reply Thu 19 Feb, 2009 06:48 pm
@JTT,
I think I'll pass on the squid guts, but thank you for the thought. However, I've eaten in some very fine Japanese restaurants in Manhattan, Boston and Washington DC. All of which (I believe) are owned and operated by Japanese business people and chefs. It's not that it's bad food, but I think you either have a "yen" for it or you don't.

Did you know they have three hearts? And that each of their tentacles are relatively autonomous? And that part of their genitals detach during intercourse?

Read up on them--every other detail will blow your mind.
0 Replies