Forums: Homes, Houses, Famous Houses
Email this Topic • Print this Page
Reply Thu 22 Jan, 2009 10:19 pm
This thread will be about the homes of notable people. I will start the thread with a photo of Thomas Paine's cottage. 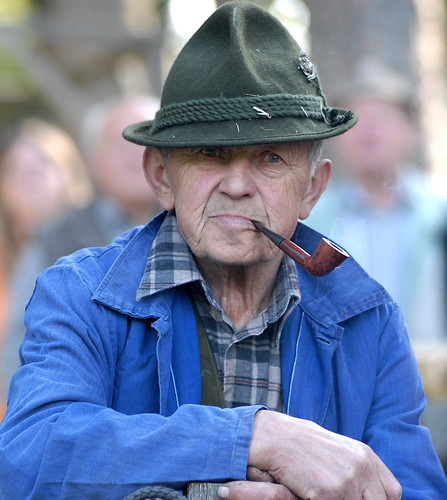 Oh well, let's hope he doesn't screw this one up. 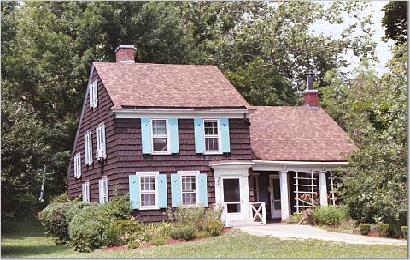 I didn't even notice that guy.

Roger - people were shorter back then.
0 Replies
1
Reply Fri 23 Jan, 2009 02:45 am
@gustavratzenhofer,
I don't like the blue shutters.
1 Reply
1
Reply Fri 23 Jan, 2009 03:07 am
@Montana,
That's exactly what I did like - the light blue with the brown - sort of like earth and sky- and then that crisp white porch and arbor to accent- but the blue is sort of an adventurous choice - most people would have stuck with white throughout. Then again, Thomas Paine wasn't most people, was he? I wonder if those are the actual colonial era colors though.

But I've always liked that sort of house and wood much moreso than brick. I'd definitely rather live in Thomas Paines house than in Betsy Ross's.
1 Reply
1
Reply Fri 23 Jan, 2009 03:16 am
@aidan,
Yeah, it's ok, but blue just isn't my color. I think I would have gone with either white or beige.
I do love the wood shingles and I like the style of the house. It's cute and cozy.
1 Reply
1
Reply Fri 23 Jan, 2009 04:03 am
@Montana,
Yeah - actually I'd have kept the brown, painted the window and door trim and porch white and maybe gone for black shutters and door - or the other way around black window and door trim with white shutters and porch.

brown, black and white - just a little more classic and I think the black would really set off the white.

I love those sort of houses too - cozy - exactly - and what a beautiful setting. I wonder if it's right outside of Philly and if so = how far.
1 Reply
1
Reply Fri 23 Jan, 2009 04:14 am
@aidan,
I was wondering were it was too. I like the dark brown for the house and I like your thoughts on the black. I think the brown house with black shutters and door would look awesome. I'm still trying to picture black window and door trim with the white shutters.
The setting is perfect as well. It looks really peaceful.
0 Replies
1
Reply Fri 23 Jan, 2009 04:33 am
@gustavratzenhofer,
Thomas Paine? Well, strangely enough, Gus, I haven't been here. 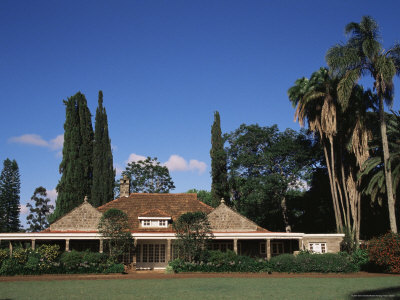 Karen Blixen (1885-1962) was a writer who, under her pen name Isak Dinesen, wrote the book “Out of Africa” which was later turned into the famous movie with Meryl Streep. Blixen was born in Denmark, where she conveniently married her nephew, baron Bror von Blixen-Finecke, and together they migrated to Kenya in 1914, where she got syphilis from her unfaithful husband.

Built in 1968, this big contemporary split level was the private home of Charles "Lefty" Driesell until it was sold by him in 1988. This unique custom built home is on a short, no-thru street in the subdivision known as Valleybrook. The home is set on a densely wooded 1/2 acre within walking distance to Springbrook High School.

The bright main level of the house has vaulted ceilings and extra windows everywhere. The home has 4 bedrooms and 2 full baths on the upper level; plus an extra bedroom and full bathroom in the lower level. The backyard is level and private, it has (of course) a half court basketball court with lighting! and steps to a path that leads all the way to Wheaton Regional Park.

This house, name Mendips, was where Lennon grew up and wrote some of The Beatles' early hits. Owned by the National Trust, there are photographs and memorabilia galore. 'Imagine' the Scouse legend in the intimacy of his boudoir and see the kitchen where he'd eat his dinner with Auntie Mimi, who famously told him, 'playing that guitar's all very well, but you'll never make any money out of it.'

Lucy Maud Montgomery who wrote Anne of Green Gables resided in this Heritage House in Cavendish, Prince Edward Island was she was young.

This famous heritage house is set amongst the natural beauty of Cavendish in Prince Edward Island where Lucy Maud Montgomery was inspired to write her well known book called Anne of Green Gables. The setting of her book written in 1908 was based around Green Gables and her childhood and today it is open to the public as a tourist attraction. 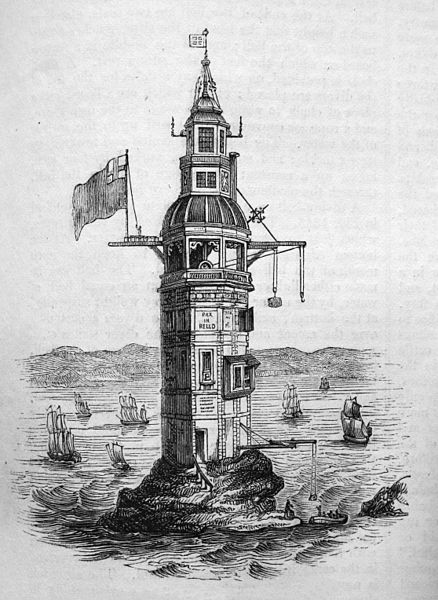 Lisa Marie: I've selected you for inclusion in the "Famous People" category of the Unusual Historicals blog because you designed and oversaw the construction of the famous Eddystone Lighthouse. The lighthouse stood 14 kilometers off the coast of Plymouth, England until it was swept away during a violent storm in 1703. What other interesting facts do you feel make you a worthy "Famous People" candidate?

Henry Winstanley: My inventions weren't limited to lighthouses. I was an engraver, an architect, and I'd always had a fascination for hydraulics and all things mechanical. I had a house built in Littlebury for the purpose of housing some of my inventions for exhibition. My "Mathematical Water Theater," combining fireworks and fountains, was a popular attraction in London's Piccadilly during the 1690's. I was called the "Jester of Littlebury," because my house was filled with all sorts of oddities, including trap doors and chairs that came alive and ensnared those who sat in them.

Lisa Marie: Would you object to my quoting a section from my historical romance novel, FIRE AT MIDNIGHT, which describes my heroine Rachael's first impression of your lighthouse?

Henry Winstanley: No, not at all. I'm very proud of my design.

Sebastién battled a strong crosswind as he steered the tiny rowboat in choppy seas. They came close enough to the great foundation of rock to which the Eddystone Light was anchored that Rachael was afforded a glimpse of its underpinnings: iron rods of at least twelve feet in length in a stone base some two dozen feet tall.

This was no ordinary lighthouse. She squinted up at the high tower as they stepped onto the landing platform that led to the front entry. The ten-sided upper section bore an artist’s impressions of the sun and moon, plus various inscriptions, mostly in Latin, Post Tenebras Lux ("After Darkness, Light"), Salutem Omnium ("For the Safety of All"), Pax En Bello ("Peace in War"), and, Glory Be To God.

Directly below the great lantern with its massive glass windows was a skillfully engraved shower of stars and the inscription, Anno Dom in bold work, flanked by a reference to the reign of William the Third.

Sebastién urged her forward, whispering that he expected to find the decor of a Parisian bordello inside. As they passed through the main door, she glimpsed another engraving in Latin, this one a proclamation that the lighthouse had been designed and constructed by Henry Winstanley.

The interior of the tower upheld the lavish style promised by its exterior. She had expected to find steep, rust-corroded spiraling stairs, drafty landings, and hard pallets tossed onto cold floors. Sebastién, evidently expecting the same, gave a low whistle when he opened a door and discovered an attractively appointed bedchamber. The room was richly gilded, with a large closet, and a small chimney. While he noted the barred outside shutters with a grunt of approval, she marveled at the fine woodwork and the quality of the tapestry rugs.
Lisa Marie: You also met my hero in a later scene, the Frenchman by the name of Sebastién Falconer.

Henry Winstanley: I'd rather not be reminded of that.

Lisa Marie: Why is that, Mr. Winstanley?

Henry Winstanley: Because I hate French privateers! When I was hard at work constructing the foundation for the first light tower to stand on the Eddystone rocks, my crew and I were attacked by French privateers and taken as hostages to France. If not for Louis XIV, I might have languished in France forever. But Louis simply ordered me returned to England, saying that, "France is at war with England, not with humanity."

Lisa Marie: Did you say, "the first light tower?" How many have there been?

Henry Winstanley: There have been a total of five. But I believe mine was the best, because it was the most beautiful design, with an octagonal tower and splendid furnishings within.

Lisa Marie: Would you share your most famous anecdote concerning the Eddystone Lighthouse with us?

Henry Winstanley: I used to say I yearned to be inside my lighthouse during the greatest storm there ever was. The lesson to be learned there is: be careful what you wish for.

Lisa Marie's closing note: Henry Winstanley and several workmen had sailed out to the Eddystone Lightouse on the night of November 27, 1703, to do repairs on the lighthouse. This was the night of what would come to be known throughout England's history as "The Great Storm." Winstanley and his crew perished when the lighthouse was swept away during the storm.
0 Replies
1
Reply Fri 23 Jan, 2009 09:05 am Lucy Maud Montgomery lived here with her husband, she wrote about half of her 22 novels in this house
0 Replies