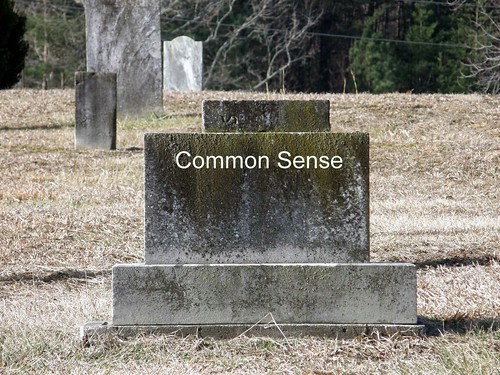 After the most recent presidential election, when, as

you may recall, our once great nation exposed its

collective flank -- unmitigated ignorance -- to the

to determine how 66 million of us could be so profoundly

We reported his findings in our "Non Compos Mentis"

section two weeks ago, including, for example,

that 56.1 percent of Obama supporters did not know

his political career was launched by two former

terrorists from the Weather Underground; that 57

percent did not know which political party controlled

congress; that 72 percent did not know Joe

because of plagiarism in law school; and that

Russia from my house," even though that was "Saturday

Night Live" comedian Tina Fey in a parody of

The Zogby polling was designed to determine how

much influence the media had on shaping public

opinion, and, thus, the outcome of the election. Of

course, establishing that the political landscape

would look very different if the media were neutral

is filed under "keen sense of the obvious."

However, a report issued last week by the Intercollegiate

why Barack Obama received so much support

support that put him over the top.

For the last two years, ISI has assessed the civil

literacy of young people at American colleges and

universities, testing both students and faculty. The

questions about our system of government,

history and free enterprise -- questions to assess the

knowledge that all Americans should possess in

order to understand their civic responsibility and

make informed decisions in matters such as elections.

schools nationwide were given the 60-question

exam. More than 50 percent of freshmen and 54

percent of seniors failed the test. (So they get

This year, ISI went beyond the "institutions of

similar questions to those asked to college and university

The results were then subjected to multivariate

regression analysis in order to determine if college

and university graduates had a higher civic IQ than

the rest of society.

failed the test, with an average score of 49. Educators

did not fare much better, scoring an average of

55 percent. As the researchers noted, "Fewer than

half of all Americans can name all three branches of

government, a minimal requirement for understanding

Less than 24 percent of those with college degrees

an official religion for the United States. Further,

only 54 percent can correctly identify the basic

tenets of the free enterprise system.

Would you be shocked to know that elected officials

have a lower civic IQ than the public they ostensibly

serve? Indeed, these paragons of representative

could not identify "life, liberty, and the pursuit of

happiness" as the inalienable rights in our Declaration

Our Founders, those venerable Patriots who signed

our Declaration of Independence and codified the

liberty that is declared in our Constitution, understood

that liberty could not long survive an epidemic

According to George Washington: "The best means

of forming a manly, virtuous, and happy people will

be found in the right education of youth. Without

this foundation, every other means, in my opinion,

without a general knowledge among the people,

who have a right, from the frame of their nature, to

knowledge, as their great Creator, who does nothing

in vain, has given them understandings, and a desire

to know; but besides this, they have a right, an indisputable,

that most dreaded and envied kind of knowledge; I

mean, of the characters and conduct of their rulers.

... Wisdom and knowledge, as well as virtue, diffused

generally among the body of the people, being

necessary for the preservation of their rights and

generally, and tyranny and oppressions of body and

mind will vanish like spirits at the dawn of day. ... If

a nation expects to be ignorant -- and free -- in a

state of civilization, it expects what never was and

James Madison agreed: "A people who mean to be

their own Governors, must arm themselves with the

power which knowledge gives. ... What spectacle

can be more edifying or more seasonable, than that

of Liberty and Learning, each leaning on the other

for their mutual & surest support?"

Today, however, it would seem that ignorance is not

only blissful but virtuous.

Have you considered the notion that the majority of US voters wanted this birth/change?

Think about it. What seems like the death of "common sense" to you might actually mean something completely different to those who voted for a new government.
2 Replies
0
Reply Tue 9 Dec, 2008 06:41 am
@msolga,
Yeah, socialism the and the outright ability to steal from me to give to the poor niggers, white and otherwise.

I'm just glad I'm not a doctor. Under O-boy's plan, their taxes are going to be about 90%.... it may be difficult for the rest of us to find a doctor to go to soon, much like it is in other countries with socialized medicine (ever wonder why the Brits have such bad teeth?).

0 Replies
1
Reply Tue 9 Dec, 2008 07:42 am
@msolga,
Msolga, we have a Constitution and Bill of Rights, and the duty of our elected officials is to uphold those rights. Obama is clearly keen on rewriting the Bill of Rights or at least how it has been interpreted for the last 232 years. And, the left wing concept of PC is nothing more than a guise for shutting down speech the left doesn't want to hear. So in my eyes, and the eyes of many true patriots, the left despises the Bill of Rights, except when it helps them.

A2K could do everyone a favor and get rid of the Ignore feature.


It seems that it is no longer needed