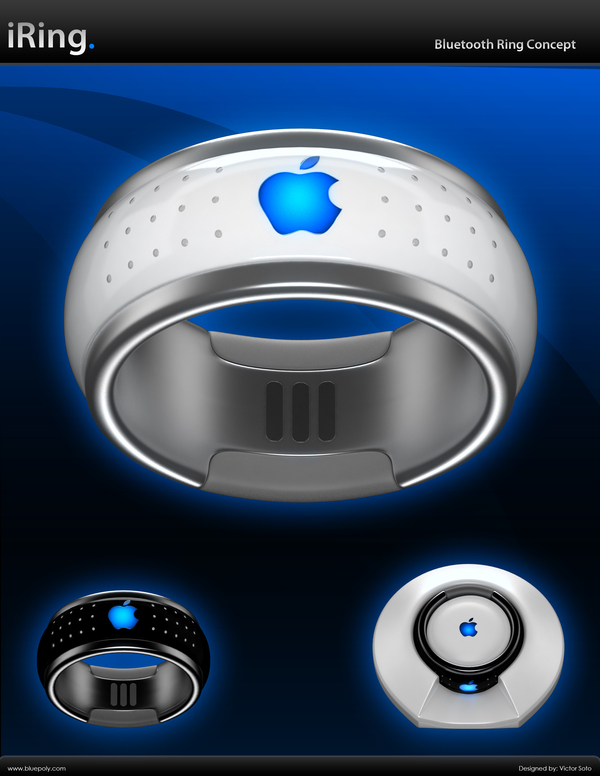 So it's just a concept. But a really cool concept.
Type: Discussion • Score: 3 • Views: 2,278 • Replies: 13
2
Reply Tue 26 Aug, 2008 01:55 pm
@DrewDad,
That is a nice concept. Then again, if ipods just came with the bluetooth ad2p stack you could just do that from your bluetooth headphones, like I already do on my portable music players.
1 Reply
1
Reply Tue 26 Aug, 2008 01:58 pm
@Robert Gentel,
They shoulda made it green, and charge off of a lantern.
0 Replies
2
Reply Tue 26 Aug, 2008 02:43 pm
I think it's really sad that people have to walk around with wires shoved in their ears all the time, blocking out other people and experiencing the world around us.

Are we so shallow we need to be entertained every second of the day?

I finally broke down and bought some ipod like thing a few months ago, as I had a sleep CD I wanted to listen to.

I think it's really sad that people have to walk around with wires shoved in their ears all the time, blocking out other people and experiencing the world around us.

Are we so shallow we need to be entertained every second of the day?

I wouldn't want to go blind, but I seriously wouldn't have a hard time with being deaf.

I wear them alot mountain biking, and also when I mow the lawn. Of course then it IS blocking out the noise. You can't hear much besides the mower anyways, so Id rather replace that sound with some Seether or something
1 Reply
1
Reply Tue 26 Aug, 2008 03:05 pm
@Nick Ashley,
I wear shooting range ear muffs around the house.


you know, I think maybe I'll carry them with me sometimes. When I'm trying to read in a public place where someone is nattering away on their cell phone, I'll put them on.

A proud statement that says "I can't tell you to shut up, but I sure don't have to listen to you."

They are red.
0 Replies
2
Reply Tue 26 Aug, 2008 03:25 pm
@chai2,
I only use my headphones very when I want to listen to music and those around me don't (within the last couple of months that has just been on airplanes and at the poker table). Headphones are just little speakers on your head, and aren't to blame for societal ills.
1 Reply
1
Reply Tue 26 Aug, 2008 03:49 pm
@Robert Gentel,
I don't blame all of societies ills or ill manners on ipods alone.

Nor would I blame them on any one thing.

However, the way I see much of todays conveniences, entertainment or technology being used seems very isolating to me.

I do seriously put on muffs when I need to separate myself from what's going on around me. That's because it seems I'm oversensitive to sounds in general, and what some people find even soothing, I find makes me feels like I'm suffering the tortures of the damned. Strangely enough, I don't find sounds of construction/traffic at all bothersome. In some way, I identify these sounds as necessary to the immediate enviroment I'm in. A building needs to be constructed, so there's going to be jackhammers. I enjoy the sounds of most birds, water in nature, the wind in the trees, loud thunder, a kid laughing while playing in their yard.

What I do find unpleasant are sounds that, the only way I can say it is, only there because they are being artifically produced, without being a necessary byproduct of the immediate environment.

I think there's always been people like that, and have dealt with it in some way.

Looking around on an average day, it appears that people are more and more are dependant on isolating themselves within ringtones, cell phones, ipods, iphones, etc. Are these to blame for societies ills? What came first the chicken or the egg? Did people get so disgusting with the world they had to tune out by plugging in? Or, because it's the latest thing, have they become unaccustomed to dealing with real people, in the desire to be hip and be seen with the latest gizmo?

Sitting on my porch, I could be in the year 2008 or 1798. I imagine people going to work, perhaps humming a tune at times, but basically just living with and enjoying the sounds present around them.

I wonder if some people, those who are always plugged, even know what the world sounds like. I imagine some people might look up and say "What's that?"....and the answer would be "leaves russling in the breeze."

I imagine people in 1798 had a lot of societal ills. But one of them wasn't lack of communication because someone said "shhhh!!! my TV show is on"

It's not technology, it how dependant we become on it.

I wouldn't want to go blind, but I seriously wouldn't have a hard time with being deaf.

I never thought about it until this year. My MIL is now almost deaf after a life of being able to hear. She says the worst thing is the loneliness. She can't gossip with her friends on the phone, people become impatient when they realize she can't hear well, people talk to her like she is mentally impaired instead of just hearing impaired. She has all those gadgets that help (subtitles, relay phone etc), but she says she misses just being about to chat with someone while standing in line or talking to the little kids who live next door. She says she feels shut out of a world she once felt very much a part of.

As to Ipods, all that stuff is like having a sound track to life, not bad, but not my thing. I prefer listening to NPR or books on tape.
0 Replies