FASTER than the speed of light. Yes.

Forums: Science And Math
Email this Topic • Print this Page
Reply Wed 3 Sep, 2003 08:03 pm
A riddle:
A sonic boom occurs when an airplane goes faster than the speed of sound.
This can also happen with light!

This electrical field that is left behind forms a shock front, much like our earlier example with sound.

How can a charged particle go faster than the speed of light???

The answer is in: http://www.physlink.com/Education/AskExperts/ae219.cfm
Is that cool or what?
Type: Discussion • Score: 0 • Views: 6,138 • Replies: 34
No top replies
1
Reply Wed 3 Sep, 2003 09:13 pm
For the layman who might be accidentally misled by such phrases as "faster than the speed of light", it should be carefully noted here that what the article is talking about is, "particles travelling at a speed greater than the speed of light in the medium in which they are moving".

The last part about the *medium* is critical, since nothing can travel faster than light in a causal sense.

It's also possible to slow down, or almost stop light within certain materials, but this also does not change the basic conditions of causality, nor does it mean that anything can travel faster than light in a vacuum.

On the accoustic front, for a really neat picture of a sonic boom in action, check this out: Sonic Boom

Explanation of the above (and other) supersonic photos are here:
http://rense.com/general8/boom.htm
http://www.wilk4.com/misc/soundbreak.htm A shock wave looks more like this.
Explanation at http://www.hq.nasa.gov/office/pao/History/SP-60/ch-5.html

A nice video, with this shock wave on the water
(with authentic sonic-boom sound!) is available here:
http://www.eng.vt.edu/fluids/msc/gallery/shocks/sfb.htm

An INCREDIBLE video of the following flyby is available here:
http://www.eng.vt.edu/fluids/msc/gallery/conden/mpegf14.htm 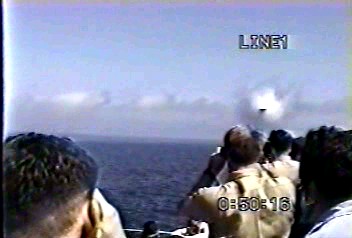 Other sonic-boom and explosion videos available here:
http://walen.virtualave.net/airtoother1.html
and http://www.voodoo.cz/tomcat/an/
0 Replies
1
Reply Thu 4 Sep, 2003 08:07 am
Yeah, but what happens if I turn on the headlights when I'm travelling faster than light?
0 Replies
1
Reply Thu 4 Sep, 2003 08:27 am
Hi CB, Yeh, I know it's a trick question, unfortunately, some people are actually tricked by it, and go away with inaccurate information.

Great links and pics on the shock wave and condensation cone. I just wish my speakers could do justice to the sonic boom. It must be spectacular live.

"the local speed of sound"


Piffka -- What *is* the speed of thought anyways?
Could there be a mental sonic-boom, if you live faster than you can think?
When all the emotions and thoughts finally catch up with you, and you suddenly realize what you've done . . .

What *is* the speed of thought anyways?

Prolly the speed of electricity.
0 Replies
1
Reply Fri 5 Sep, 2003 01:23 am
Whatever turns the lightbulb on over ones head?
Maybe the key to true enlightenment is a bolt of lightning.

I survived lightning once, some mild St. Elmo's Fire that scorched my hair, but that seemed more careless than thoughtful. That was more like the speed of stupidity!

How fast does electrical thought travel -- if the medium is really dense?

Would drinking one of those electrolyte sport-drinks increase our capacitance for thought?

Really cool series of science articles describes it at:
http://www.abc.net.au/science/k2/moments/s512994.htm

Still wondering about the speed of thought... I like to mull things over slowly.
0 Replies
1
Reply Sat 6 Sep, 2003 02:29 am
LW -- Seems like racing towards a red light would shift it very slightly towards yellow and blue. Anyone have an idea how fast that Porsche would have to go to make it fully yellow? 100,000 miles/second? 150? I'm no scientist, but is the calculation really as straight-forward as the following?

3) So, for a driver to "see" red as yellow, he has to gobble up 8.8% more light waves than usual, by driving 8.8% the speed of light towards the light. Look at it this way: In the time it takes the lightbulb to emit 1000 wavelengths of red light, the car will travel the distance of 88 extra wavelengths towards it.

At that point the cop would have no reason to give you a ticket for running a red light -- or even speeding or anything else I guess. You'd get away with it Scot free.

6) Hey in fact, escape velocity from the Earth is 17,000 mph and our solar escape velocity is only 43 kilometers a second (27 miles per second). Our Porsche would not only be out of this world, but it would be 600 times faster than needed to leave the solar system as well.

(Does that seem about right? I'm not sure if relativity would be involved or not.)
0 Replies
1
Reply Sat 6 Sep, 2003 07:36 am
But would that all hold up in court? I think the judge might give you kudos for inventivness and still fine you for running a red light. On the other had, you might get a judge or jury so confused that they acquit. The traffic cop would probalby have to go into therepy either way.
0 Replies
1
Reply Sat 13 Sep, 2003 01:17 am
I'm not completely sure a judge would be able to catch a yellow-shifting Porsche.

How could you get a Porsche to go so fast? I'm thinking a rocket or a rail-gun would scrunch it all up with the G-forces, accelerating it to 16,368 miles per second, too fast all at once. We would need to gradually build up the speed, maybe with a faster and faster orbit.

Hey, there are companies building a space elevator, a long cable from the ground all the way up past satellite altitudes. (See HighLift Systems, Inst. for Scientific Research, and LiftPort Inc). The idea is to make the cable much higher than geostationary satellites, so the extra cable length pulls away from the Earth instead of falling, thus holding the whole thing up without any more rockets or fuel. It just hangs there, spinning with the Earth, a ladder right up into space.

They may as well call it a bean-stalk! So, what if we named the Porsche "Jack", carried up to the end of the cable, wait a little bit, then let it go? Would that work?

For the end of the cable to achieve the right speed for our Porsche, every 24 hours it would have to travel 1414 million miles. That's a radius of 225 million miles from the Earth. The distance to the sun is only 93 million miles.

So if we extend our space elevator (that we're building 50,000 miles long anyways) to three times further than the sun, lift the Porsche to the end of it, and fling it around once every 24 hours, *then* it would be fast enough to turn red light into yellow. No cop on earth would dare to give you a ticket then.

If the cable only went 375,000 miles (0.4% of the way to the sun) it would at least reach solar escape velocity -- but leaving the solar system isn't nearly as exciting as shifting red light into yellow.

The math of physics does not rule out the superluminal. While not undisputed, the existence of matter traveling faster than the speed of light violates nothing beyond preconception.
0 Replies
1
Reply Mon 15 Sep, 2003 08:41 pm
Upon reading that, timber, my atoms are now properly discombobulated.
0 Replies