Forums: Africa, War, Poverty, Rwanda, Burundi
Email this Topic • Print this Page
Reply Sat 8 Mar, 2008 12:18 pm
A friend of mine is in Rwanda for half a year. She's a brilliant writer and she blogs from there. Not sure if i can link to her blog, i presume not, but I thought i'd share some of her writing here every now and then, as it's always a good read.

Here's an article from Agence France Press, which is like the A.P. or Reuters-those big news organizations that cover the world in "traditional journalism style." You'll recognize it; it's that thing Jon Stewart mocks so brilliantly. The article is short, but I made it shorter, so I can get to the point:

Are you asleep yet?
This article shocked me, actually. What's this person, whoever he or she is who wrote it, really saying? In news journalism, the last thing you write is supposed to be the "most expendable." An editor should be able to look at your story and if it doesn't fit in the space, he starts cutting paragraphs, from the bottom up. But in order to understand what this person is really saying, I have to start from the bottom of his article and work my way to the top. That, already, is an indictment, of the article and the model it is based on.
In 1993, the third in a history of ethnic massacres broke out in Burundi. It's an unrecognized genocide, one which shares some of the dimensions of but was somehow eclipsed by Rwanda's own genocide in 1994. Strangers killed strangers; neighbors killed neighbors, and at the end of it all, three hundred thousand people had died, whole families were destroyed, and probably some, as in Rwanda, still haven't received proper burial. The country's infrastructure-roads, agriculture, electricity, to say nothing of banks and business-still hasn't recovered; even if it had, generations of talented Burundians aren't alive any more, and 15 short years aren't quite enough to train those who do remain or who have returned to make a country function.
Since then, the country has slowly been negotiating peace, formally and informally: You can have all the agreements you want, but peace is negotiated every day by the people who live in your country.
As you can probably guess, any history of massacres also means a history of refugees. Even before 1993, hundreds of thousands of Burundians were living in refugee camps in Tanzania, Kenya, Rwanda, Congo. As Burundi became stable, they returned home-sometimes because they wanted to, sometimes because their "hosts" wanted them to leave. So now Burundi's population is soaring. So are land conflicts: if I fled from my family home during the second massacres in 1972, and you've been living there since, who owns the house? Does our instinctual answer to that question change if we find out that you, who have been living there, chased we who fled away with a machete? How can we both eat, in a country where people have for generations grown their own food, and where the opportunity to grow food comes only with the right to land, which comes through the family?
And so "Some 600,000 Burundians are suffering from food shortages and need emergency aid.Burundi was self-sufficient in 1993 but that the population had since grown by 33 percent while production stagnated."
This is voice for the voiceless?
We say we want to solve problems. How can we solve problems if the very language we use to describe them fails to tell us what they really are? This is not just a problem of journalists. Download a Security Council resolution or a State Department report. Pick up a program report from USAID or CARE, two big players in international aid: This is also a problem of diplomats, and it's a problem of development workers. In the course of our professional duties to be objective, or to be scientific, or to be both, we use language to cut out of our jobs the very people we are supposed to be helping. The problem is, we in those professions also profess to be advocating for them.
There is a way to be fair, to be objective, to be clear-headed, to be independent, while also acknowledging the humanity of the people you are working with, the nuance of the context you are working in.
So next time you are writing a world news article, or using a log frame, or advising your boss about policy options, stop for a second and read out loud what you have in your hands. Can you hear anything human in it?
Type: Discussion • Score: 1 • Views: 4,212 • Replies: 11
No top replies
1
Reply Sat 8 Mar, 2008 01:42 pm
Lovely.

when you see how the "ordinary" people have to live - well , that's a different story .

even opposition leaders and rebel leaders often look as if they don't come from the same group of people as those "ordinary" people they claim to represent .

i believe that this is a picture of nelson mandela (yes ,i know who he is) meeting with a government and an opposition leader - i can't tell who is who .
both look like they just came from a health-spa - unfortunately they forgot to invite some of the "ordinary" people . 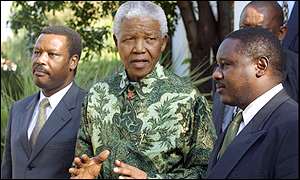 But speaking of "helping" the third world countries, here's another good post from Jina:

I Can't Believe I'm Posting About George Clooney
February 22, 2008
It has come to this. But maybe the "it" isn't me Hold on, we need some context:

Clooney recently had a dark-night-of-the-soul (or of the red wine, depending) with Time Magazine's Joel Stein, about Darfur:

It doesn't take all that much time in a place like Rwanda to start wondering if aid works, or how it might work better. Here's an excerpt from a blog I just happened upon, in which a guy from Europe (Germany?) who's been here a lot longer than I raises a few difficult questions:
The failures of the aid industry are becoming more obvious and more difficult to hide. And it is unfortunate, because aid is not bad per se. For me, there are still brilliant people and great organisations doing amazing work in Africa. The methods of the aid industry simply need to change, and people back in "the developed world" need to begin to understand the change that is needed, in order to start lobbying for it. For example:
- Don't give anything for free. Used clothes from Germany destroy the local textiles market, free American vegetable oil competes with local farmers, free solar power modules put local traders out of business and free money goes to the corrupt and lazy. When you give things for free, you destroy local businesses and livelihoods.
- Use the private sector, even if it means that projects are more difficult. Use local construction companies, hire local companies to implement projects, create joint ventures and public-private partnership, encourage an entrepreneurial mentality. Find ways to deal with the cheats, con-artists and dubious businessmen that leach off donors.
- Stop using cash flow as a way of measuring aid agencies' performance. Almost all aid agencies have "spending targets" as a way of measuring their "success" in their country programmes. In the aid industry, if you're not spending, you're not working. This encourages reckless spending and bizarre behaviour. At the end of the fiscal year for example, many donors will start spending huge amounts of money on products and consultants with little overall strategy.
So the question is, is it worth continuing with the development aid industry?
You can read the whole post, or the rest of his blog, here. But don't stop coming back to mine. I'll be so lonely.

Anyone who's ever left the States-hell, anyone who's left a small hometown for a big city, or vice versa-knows that awkward squishy feeling of saying your how-do-you-do's. Especially in a foreign culture, it's a guessing game of non-verbalsa form of communication which itself is totally unreliable, because non-verbals are not universal. That cute little informal wave goodbye in America, the one where you fold your fingers down a few times, means, "Hey, come here" in much of East Africa.
It's the handshakes that always get me. I have always found them very corporate, and I misjudge them every time. I might remember to grip vigorously-especially if it's a man, and he's in a nice suit-but I'll forget to fortify my arm, and I wind up being wobbled about.
Handshakes are not like that in Rwanda, to say the least. There's a national reprieve from shaking, actually; it's more hand touching, the kind of contact that qualifies in the States as the derided "limp handshake." But that's what's even weirder, for Americans: lingering contact with a stranger.
I've noticed three categories of greetings: the extended hand-clasp, not so much a clasp really as a mutual habitation of the same hand-space while greetings are exchanged; the lower-arm clasp; and the full-on hug. (There's also the three kisses for women, or touches of the head for men, but this, like paper money and bureaucracy, is a legacy of the Belgians.)
The arm-clasp is my favorite, because I've never seen anything like it. It's like shaking hands but at the wrist level, or higher. I wondered if there was a hierarchy of greetings, if, say, the arm-clasp was for people who aren't strangers, but aren't friendly enough to hug. A Rwandan friend told me this is clever but completely wrong (see, "non-verbals are not universal."). "It is," she says, "like half a hug," and easier to execute if there's, say, a table in the way.
As for the hugging, another Rwandan woman told me, "It's just our culture. We don't feel we've properly said hello to you unless we've hugged you."
I think Rwanda is going to work out okay for me.
0 Replies