Pet penguins - Why you can't buy a penguin

Forums: Penguins, Pets And Garden, Pets, Exotic Animals
Email this Topic • Print this Page
Reply Tue 6 Nov, 2007 04:04 am
Ok, so I know that penguins are endangered and it's illegal to buy them in just about every scenario. I also know that for most people it would be cruel for them to own a penguin since they'd not be able to properly care for it.

And the only pet penguin I've ever heard of was rescued by its family from a fisherman's net.

So my question is: has anyone ever heard of someone buying a pet penguin?

http://clubpenguin.com/ for your inner child.

only it's not real.

i too wanted one. i think if you get a habitat permit or someshit you can raise them if you are capable and certified.

the reason that there are so few polar bears near the south pole compared to the north pole is directly related to massive amounts of penguins down there since polar bears are the main diet of carnivorous penguins.
1 Reply
1
Reply Mon 21 Jan, 2008 05:02 pm
kuvasz wrote:

well, first of all they are vicious as hell and can rip out your throat or peck out your eyes in an instant.

the reason that there are so few polar bears near the south pole compared to the north pole is directly related to massive amounts of penguins down there since polar bears are the main diet of carnivorous penguins. 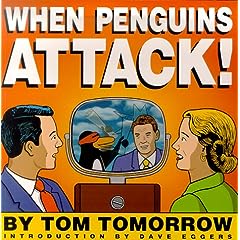 1 Reply
1
Reply Mon 21 Jan, 2008 05:20 pm
i have my own pet penguin . last visited it in march 06 - so another visit should be in order .
since they feed themselves by going fishing when hungry , pet penguis are really no trouble at all .
hbg

0 Replies
1
Reply Mon 21 Jan, 2008 05:22 pm
Penguins are a protected species, so one couldn't own one as a pet.
You can adopt one at the zoo, and visit often. Perhaps the penguin
will recognize you one day and wave

A state trooper is sitting at the side of the road which runs from Houston to Galveston/Freeport, which is to say, the road to the beach. The traffic is fairly heavy, as would be expected in summer, but it's moving along well, and there don't seem to be any problems. Then the trooper sees a bright yellow pick-up truck drive by, with about three or four dozen penguins in the back. He rolls his eyes, thinks to himself that it takes all kinds, and pulls out to catch up to the truck and pull him over.

He walks up to the driver's side window. The driver rolls it down and says:

Hey officer, how ya doin' t'day?

I did, i knew that officer.

Don't you think you should take them to the zoo?

The officer shakes his head and goes back to his cruiser, and thinks no more about it. A few days later, he's sitting at the side of the road, and it's the same story, heavy traffic, but everything moving along smoothly--when he sees the same bright yellow pick-up (there's no mistaking it) and not only are there 30 or 40 penguins in the back, but they're all wearing little, tiny sunglasses. He pulls the guy over:

I'm just fine--i thought i told you to take those penguins to the zoo.

some of them have good senses of humor