Japan: Hide from robbers in your Coca-Cola machine dress

There's a great photo series with the article.. 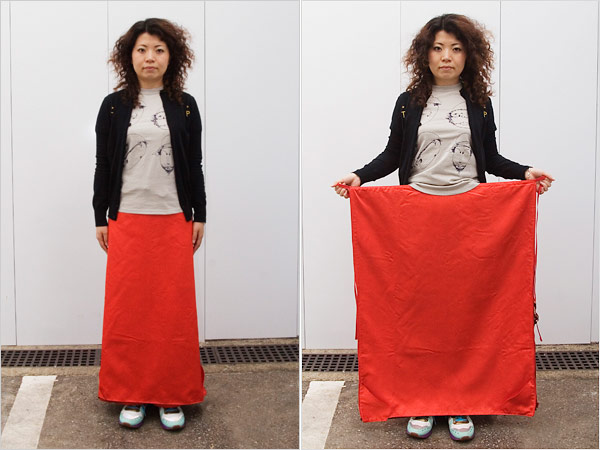 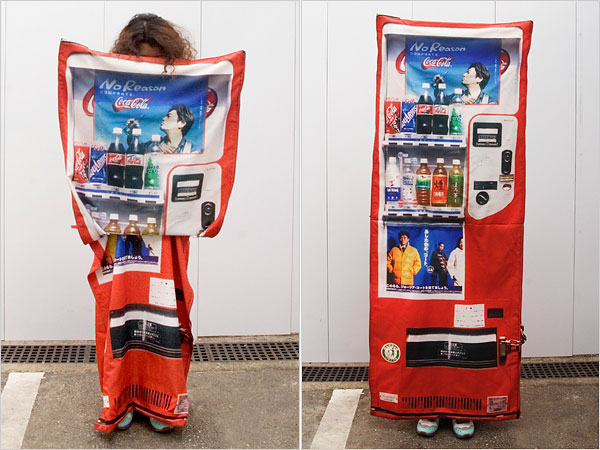 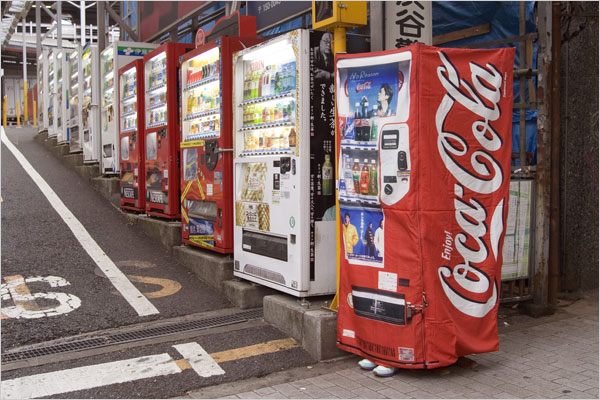 These elaborate defenses are coming at a time when crime rates are actually declining in Japan. But the Japanese, sensitive to the slightest signs of social fraying, say they feel growing anxiety about safety, fanned by sensationalist news media. Instead of pepper spray, though, they are devising a variety of novel solutions, some high-tech, others quirky, but all reflecting a peculiarly Japanese sensibility.

Take the "manhole bag," a purse that can hide valuables by unfolding to look like a sewer cover. Lay it on the street with your wallet inside, and unwitting thieves are supposed to walk right by. There is also a line of knife-proof high school uniforms made with the same material as Kevlar, and a book with tips on how to dress even the nerdiest children like "pseudohoodlums" to fend off schoolyard bullies.

There are pastel-colored cellphones for children that parents can track, and a chip for backpacks that signals when children enter and leave school. 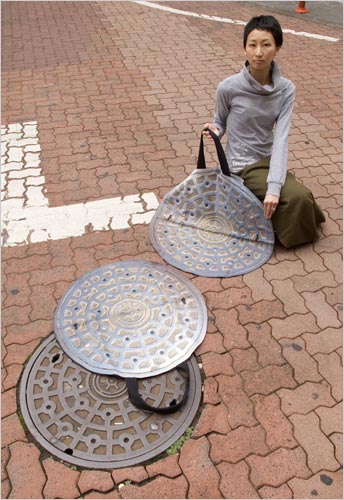 Some interesting cultural backgrounds to this weirdness..

The devices' creators admit that some of their ideas may seem far-fetched, especially to crime-hardened Americans. And even some Japanese find some of them a tad naïve, possibly reflecting the nation's relative lack of experience with actual street crime. Despite media attention on a few sensational cases, the rate of violent crime remains just one-seventh of America's.

But the devices' creators also argue that Japan's ideas about crime prevention are a product of deeper cultural differences. While Americans want to protect themselves from criminals, or even strike back, the creators say many Japanese favor camouflage and deception, reflecting a culture that abhors self-assertion, even in self-defense.

"It is just easier for Japanese to hide," Ms. Tsukioka said. "Making a scene would be too embarrassing."

However, the fact that they were greeted here with straight faces, or even appeared at all, [also] underscores another, less appreciated facet of Japanese society: its fondness for oddball ideas and inventions.

Japan's corporate labs have showered the world with technology, from transistor radios to hybrid cars. But the nation is also home to a prolific subculture of individual inventors, whose ideas range from practical to bizarre. Inventors say a tradition of tinkering and building has made Japan welcoming to experimental ideas, no matter how eccentric.

In fact, Japan produces so many unusual inventions that it even has a word for them: chindogu, or "queer tools." The term was popularized by Kenji Kawakami, whose hundreds of intentionally impractical and humorous inventions have won him international attention as Japan's answer to Rube Goldberg. His creations, which he calls "unuseless," include a roll of toilet paper attached to the head for easy reach in hay fever season, and tiny mops for a cat's feet that polish the floor as the cat prowls.

I love the houses that have one rock, just sitting there near the front door, without any other rocks in the vicinity.