Ronaldo, Ronaldinho, Zidane, Kaka and David Beckham are unlikely icons among girls in a remote village in the dirt-poor Indian state of Bihar.

The girls of Barauni village in Begusarai district eat, drink and sleep football and stay up all night to catch their favourite teams at the World Cup on television. [..]

The girls of Barauni are not only mad about football, they also play the game with a lot of passion - three girls from the village have played in the national women's team, and seven others have been in the state team.

In a near-lawless district - over 100 people have died in political killings in one village alone - the achievements of Barauni's football girls have gone largely unnoticed. [..]

Mausam Kumari, who is the captain for the village football club, is confident that if the girls of Barauni are given better facilities to train, they can beat any women's team in the world.

"We just, eat, sleep and breathe football," she says.

The state government does not seem to be even aware of the champion girls of Barauni - only a local politician has contributed 3,000 rupees ($65) to the club. [..]

Why do the girls of Barauni excel in football?

"They are more disciplined and they show greater energy to excel. The boys here play football too but they are inconsistent and undisciplined," says coach Sanjiv Kumar Singh. [..]

"Initially, I had a lot of doubts. But today I feel proud of being father to my two national football playing daughters, Shilu and Neelum," says Rajkumar Singh, even as he grazes his buffaloes and earns about 2000 rupees ($43) a month. [..] 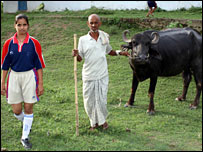 Shilu's farmer father, Rajkumar Singh, is happy with her success