THE GREATEST HOAX IN THE HISTORY OF SCIENCE! (PART 2)

Forums: Goethe, Science, Refraction, Physics, Newton
Email this Topic • Print this Page
Reply Mon 5 Jul, 2021 08:15 am
In relation to my post
THE GREATEST HOAX IN THE HISTORY OF SCIENCE!
I want to give an explanation of the extraordinary experiments with prismatic colors presented in this video:

This video exposes very obviously the whole emptiness of the Newton’s theory of colors.
Please watch it carefully (especially its later part) before reading this post.

The key for an explanation of the prismatic colors and the extraordinary experiments presented in this video is the “principle of the arrow”. I call you to remember this phrase very well because it will certainly be the milestone of the future science.

What is the principle of the arrow? Although I have elaborated it many times in my older answers and posts, still I will repeat the main points here for those who haven’t read them (I will also cite some articles of mine at the end of this post).

The greater the velocity of the body is, the stronger is the plus in front of it as well as the minus behind it.

And look now: this very principle can be found wherever the light produces colors. The archetype of this pattern is the flame of a candle or a cigarette lighter. A violet/cyan minus appears at the back and a yellow/red plus at the front of this fiery arrow: 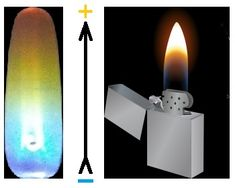 The left picture is a real photograph of an opalite stone illuminated from below with a white LED lamp. ( Opalites are very cheap stones and easy to find. I urge everyone who is really interested in light and colors to find these stones. )

Let’s find the same principle in the phenomenon of refraction colors, that is, the colors which appear on a triangular prism.

The light undergoes two refractions on the prism: one on entering the prism and another on emerging from it. For the birth of the refraction colors there is no need of a double, but only of a single refraction. In the following video it is visible how the colors appear only with one refraction (from 0:48 to 0:57):

Let me jump for a moment to something else, to the question of the so-called Bernoulli’s principle (footnote 1). Please look at the picture below:

The water flows through a wider pipe and then through a narrower pipe. The velocity of the water increases in the narrower pipe. As a result, the water column over it is lower than over the wider pipe. Why is that so?
The water columns over the pipes could be imagined as many tails of the water-body. Since the velocity of the water is greater in the narrower pipe, a stronger MINUS occurs in its tail than in the tail of the wider pipe, thus the air-pressure from above lowers the water column over the narrower pipe more. At the same time a stronger PLUS arises at the front part of the narrower pipe. Everyone knows that the water-jet which comes out of a pipe reaches farther if we narrow the pipe. That happens because higher pressure occurs in the front part.
So, HIGHER PRESSURE within the plus-side of the water-body, while LOWER PRESSURE within its minus-side.
But could the water-body with the higher pressure in its plus-side and the lower-pressure in its minus-side exist without a material environment, that is, without the surrounding air? No, it could not. The surrounding air is an inevitable actor in the whole story.
I want here to stress that in the case of the moving solid body, the higher and the lower pressure arise in the surrounding air, while in the case of the moving liquid body, they arise within it.

These two ways of propagation can be imagined as follows: imagine two threads stretched across a room, one horizontally, the other diagonally. On each of the threads is hanging a pierced sheet of paper. We are moving the two sheets along the threads so that they are always in a vertical position. In the figure (a) below is represented the frontal propagation, while in the figure (b) the sideways propagation. The sheet in the figure (b) does not have to be necessarily vertical. It only must not be at right angle to the direction of the thread.

Please look at the diagram below: 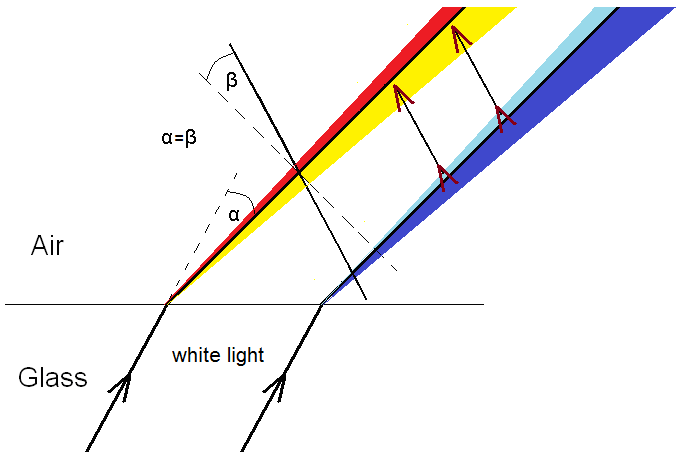 A beam of light is refracted. After the refraction, besides the normal component, the beam gets an additional component in the direction marked with the black arrows. Higher light-pressure arises at the front of this component (i.e. plus-colors), while lower light-pressure (i.e. minus-colors) at its back. But these different light-pressures can occur due to the surrounding air, similarly to the cases of the solid and the liquid body. In other words, if we place a prism or a diffraction grating in a very high vacuum, then I claim that the refracted or diffracted white light will remain white after passing through them.

Now, please look at this screenshot from the video: 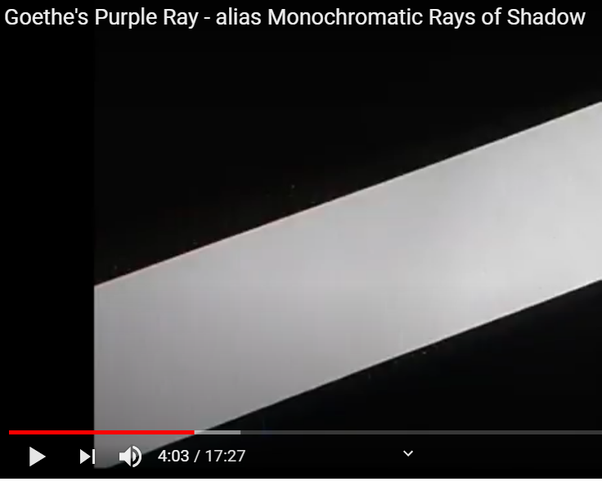 A beam of light has passed through the prism, but the colored boundaries are covered with black papers.
Let’s say that the source of light and the prism are placed in a black box and you see only the beam presented in the screenshot. Then someone asks you:
He: What do you see?
You: A beam of white light.
He: Is it a normal light?
You: What kind of question is that? Of course it is a normal white light!
He: No, it is not a normal light. Watch now!

And then he places an object in the middle of the beam (screenshot below). 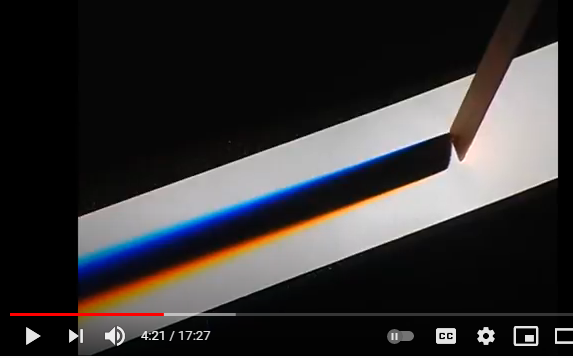 He: Does a normal light throw a shadow like this?!
You: No, it doesn’t … then, what kind of light is this?
He: It’s not a normal, but a slanted light.

Let us now move to the experiments when only one colored ray of the so-called Goethe’s spectrum passes through a narrow slit (screenshot below): 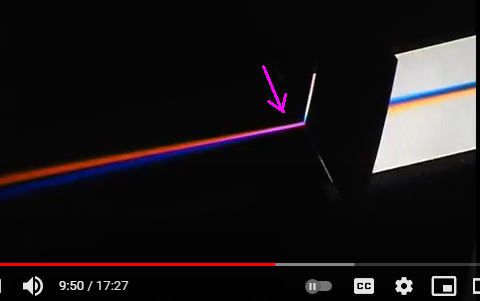 In the screenshot above only the second case is presented for the sake of shortness.
The magenta arrow is added by me to stress a very important detail, that is, the ray has still its own color in the close vicinity of the slit. The same applies for the cyan ray and the yellow ray when they exit the slit.

Before I explain what is going on here, let me tell you something else.
Please look at the figure below: 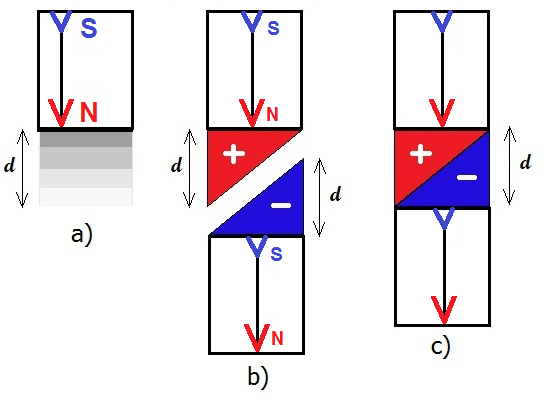 The weakening is also symbolically represented by the red and the blue triangle in the figure (b). If the two identical magnets are brought at the distance ‘d’ (or less than ‘d’) without allowing them to come together, then in the interspace between them there is a uniform magnetic field because the two fields complement each other. This means that the strength of the magnetic field is the same in every point of the interspace (figure c).

The magnetic field is uniform in terms of strength, but it is not homogeneous in terms of polarity. The Plus and the Minus retain their character just as before the bringing of the magnets close to each other.

Something similar to the things just discussed we have with light. Look please at the screenshot below:

Look now at this screenshot:

The shadow is now narrow so that an interaction between the beams can occur. The Plus from below meets the Minus from above, that is, the red color meets the blue-violet. Their overlapping bears magenta. This is not the same case as when we mix chemical colors. If we mix acrylic red and acrylic blue-violet, we do get magenta, but we cannot bring the process back, that is, we cannot separate it into two colors. With the light it is possible.

On the right of the last image, the corresponding situation with two magnets is presented. When the magnets are close to each other, then their fields interact, but, as I said before, the Plus and the Minus retain their character. In relation to this, please read (link at the end of this passage) about another hoax of the contemporary science, the so-called Fleming’s left hand rule. This rule states that if a current-carrying conductor is placed in a uniform magnetic field, then it will experience a force which is perpendicular to the magnetic lines of force. This is true only in the case when the conductor is placed exactly in the middle between the magnets, where the strength of the Plus and the Minus are equal. In every other case it is not true that the force acts perpendicularly to the magnetic lines of force. (please see these articles Is the Fleming’s left hand rule valid? and A physics task to be solved (Part 2))

The plane which is exactly between the magnets corresponds in a sense to the magenta color of the Goethe’s spectrum.

Now, let’s get back to this screenshot: 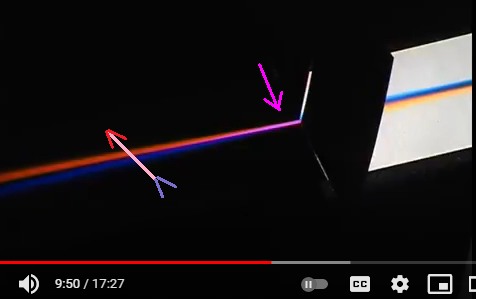 What is actually going on here? The magenta ray enters an environment of low light-pressure, i.e. the pressure around the ray suddenly drops. Therefore, it is a suitable environment for it to dissolve in the original Plus and Minus components.

Please note a very interesting detail in this process. Before the slit in the last screenshot, the magenta ray comes about through mixing of the red ray from below with the blue-violet from above. After the slit the ray splits into a red ray above, while the blue-violet one is below, that is, the rays have exchanged the places.
What does this tell? It tells that this ray behaves as the original refracted light (marked with the added three-colored arrow) although it is born from rays of reverse order.
But we can say also otherwise: the red and the blue-violet ray retain their own directions just as if they were not mixed before the slit.

Look now at this screenshot: 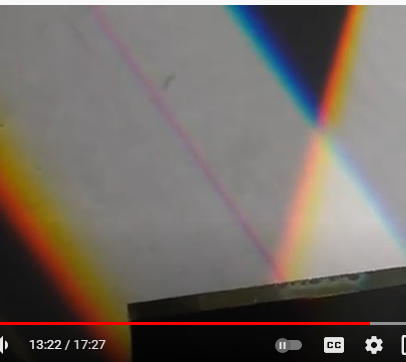 In this case the magenta ray doesn’t split into two. Why? Because it enters an environment of high light-pressure. The forces around it are so strong that it cannot fall apart.

I leave the other variations of the experiments to the reader to try to explain them on his/her own.

Here are some important articles of mine related to this post:

Why is the sky blue? How does light make colors appear?

What is an achromatic doublet?

P.S. The author of the video succeeded to split also the green ray in its constituent parts, yellow and cyan, but it is not presented in the video. 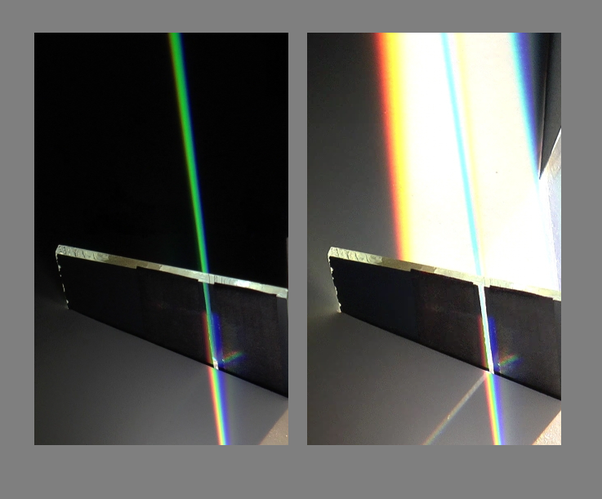 The colour of light is determined by its wavelength. Ypu can only see the colour when it reflects off something, but we can measure the wavelength and tell you what the colour is, extremely accurately (the whole science of Spectroscopy is based on this).

Here is a simple experiment with whichyou can demonstrate the fallacy of your proposition. Shine a red lazer through the prism. What happens? Nothing! It gets bent, but it doesn't change colour, because it consists of a single wavelength while white light consists of a mixture of wavelengths.


You can also generate three light beams in each of the primary colours, and if you combined them you will get white light.


There is no hoax. You just don't seem to understand the basics of the properties of light.