Is contempt for boomers justified? 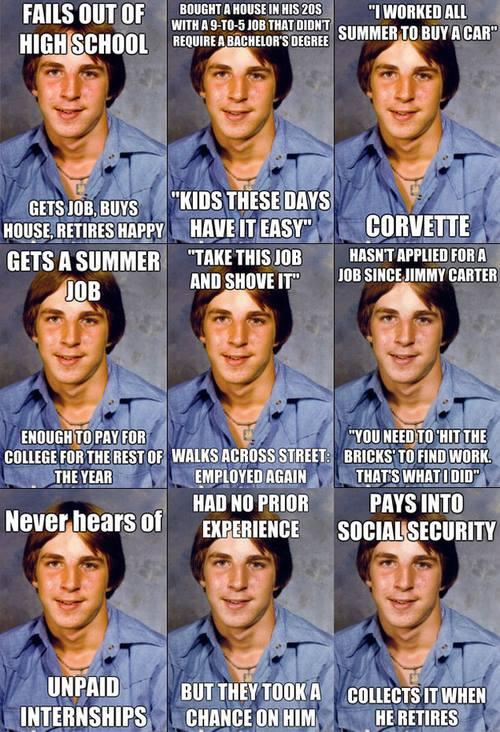 I was watching a podcast the other day. A baby boomer was soap-boxing about how millennials are 'lazy'.

He was talking about how he purchased a house in 1979 with no down payment, by taking over the previous owner's loan. The house was a large 4 bedroom 2 bath, for $25K (imagine how much that is worth today.)

This was a person I otherwise like listening to, but when the boomerisms kick in, my eyes roll back into my head so hard it gives me whiplash.

I often think about all the money I've paid into social security that I will never see one penny of...
Type: Question • Score: 9 • Views: 233 • Replies: 11
1
Reply Mon 29 Jun, 2020 07:02 am
As a boomer myself, I think the millennials are naïve about how the world works, but I just keep my opinions to myself as to argument with them is pointless. I think its just a generational thing. When I was your age, we had our issues with the older generation and I am sure you will have your issues with the youth in 30 years from now. Just remember, whatever the government touches is generally messed up down the road : Student Loans, Mortgage Crisis from a few yeas ago, Social Security, Medicare, ACA.....If I were to sum it up, it's my view that many (not all) millennials think government can solve things because they lack the real world experience to see that it is just the opposite
1 Reply
1
Reply Mon 29 Jun, 2020 07:40 am
@shug23,
"millennials think government can solve things"

This is why I find the criticisms of the boomers so ludicrous. It's not to say some of it isn't justified. Still, it lumps a lot of people together who have little to nothing in common. It also treats the oldest boomers more like the Greatest generation.

Yeah, my folks are in the tail end of their 80s. My dad knows enough about computers to be dangerous. My mother, nearly nothing (she wasn't brought up to embrace technology). In contrast, my brother and I are boomers, born in '59 and '62, respectively. We are both power users. He's a project manager; I'm a content manager. Neither of us got a car in high school (for the people we went to hs with who did, it wasn't from summer jobs - it was from working an entire school year and then some, and those were used cars). And we didn't jump into jobs immediately at all. Not even close.

Pretending these people are all the same is the same kind of monolithic treatment which most people don't like. Big shocker there that we might not like it, either.
1 Reply
3
Reply Mon 29 Jun, 2020 07:54 am
I think it might have been glitterbag who once said:

Be careful how you judge, you haven't lived your whole life yet.

Pretending these people are all the same is the same kind of monolithic treatment which most people don't like.

This can't be emphasized strongly enough.
0 Replies
1
Reply Mon 29 Jun, 2020 09:02 am
@jespah,
I'd agree a bit with jespah - I think each generation has it own types of hurdles to deal with depending on what is going on in their lives especially as they reach ages where they are to begin taking on more and more responsibility for themselves.

I wonder what is going to happen to the generation now that is reaching around the 17 - 23 or so age with this pandemic. These are the ages where they go off to college, work, some sort of service. Those that just graduated - with high unemployment and limited ability to get to "pound the pavement"; those that had potential jobs pulled out from under them due to this pandemic. Those starting college or in college - not the experience they expected with online learning, limited in class and many campuses closed down or partial close downs.

We are likely to see another difference in this generation due to this stuff happening.

Each generation has their own hurdles or situations - that are out of their control and this will result in a different mind set to the generation.

None of them are wrong - or should have contempt - just change in values due the circumstances in which they grew up or started their independence. Some in each in generation can viewed as good and some bad.
0 Replies
2
Reply Mon 29 Jun, 2020 09:12 am
I don't see any "contempt for boomers". What I do see is a reaction to contempt for millennials that produces a counter response. A lot of those captioned pictured in the OP show that. Older generations are telling younger generations "you should be doing this" or "I did that in my day". What the OP brands as contempt is actually the frustration of a generation who faces challenges we did not and has the Internet to help them vent.
0 Replies
-2
Reply Tue 30 Jun, 2020 12:25 pm
My opinion on the current generation is that I think they are weak but it is not their fault. The degeneration of the US culture goes back to at least the Vietnam War. We started losing our grit in Vietnam and it only has gotten worse since then. We were defeated and humiliated by a fourth-rate military power to point we were cowed by the communist and did not resist them for the rest of the seventies with the coward Jimmy Carter being the greatest example of that period.

It took Ronald Reagan to turn things around; he could nothing about the culture, but he did resist the communist against considerable liberal opposition. Reagan used the Afghan mujahideen to fight the Russians in Afghanistan and other US presidents used our professional military to fight our little wars against terrorists. We have most likely the best military in the world; the problem is that they are not that big. If we get into a war with the Russians in the artic, we will lose. The only hope would be a fast decisive victory by our professional army. If it turns out to be a war of attrition we will lose. We have perhaps 250,000 front line trumps; we outnumber their population by two to one, but they could put perhaps five times more combats troops in the field. The Russians have both a professional and a draftee army. Their people will submit to the draft, but ours won’t. We have a small army and no replacements. We would lose a war of attrition with the Russians.

Isn’t it obvious that I am boomer with references like Vietnam, Jimmy the coward Carter and Ronald Reagan? But you said nothing about the current culture. Perhaps you think they are men and women of iron; I have a different opinion more along the line of marshmallows. Now don’t get me wrong boomers are nothing to write home about and neither generation is fit to shine the shoes of the WWII generation. I love my grandchildren with all my heart, but to send them off to war would be nothing short of murder. If the Russians ever understand just how morally weak we are, we are screwed.
0 Replies
0
Reply Wed 1 Jul, 2020 11:20 am
It has happened before in history. During the closing years of the Western Roman Empire, Roman General Flavius Aetius struggled to resist Attila the Hun’s incursion into northern Italy; but, he could ‘not put together a large enough force for a direct attack on Attila’s army. The Roman men would not fight. It is said, when they heard that Roman recruiters were on the way, they would cut off their thumbs to avoid military service. Unable to put together a large enough army general Aetius was forced to make deals with German kings who lived within the empire. It didn’t take long before the Germans understood how morally weak the Romans were; the days of the empire in the west were numbered. The Romans greatly out-numbered the Germanic tribes, but the Romans became their slaves and subjects.

There is still time to do some about it, but we won't.
0 Replies