Is the complex plane its own mathematical dimension?

Forums: Quantum Physics, Dimension, Mathematical, Complex Plane, Complex Dimension
Email this Topic • Print this Page
Reply Mon 18 May, 2020 08:33 am
If the complex plane is a perpendicular imaginary axis, can we use it as a mathematical dimension to put quantum waves and black holes?

The Complex Dimension is born.

A mathematical object going from complex to real/classical/local is decoherence.

Dark matter is in the Complex Dimension.

Anything that experiences Uncertainty is in this dimension.

Entanglement, Superposition, Tunneling, and Coherence happen in this dimension. 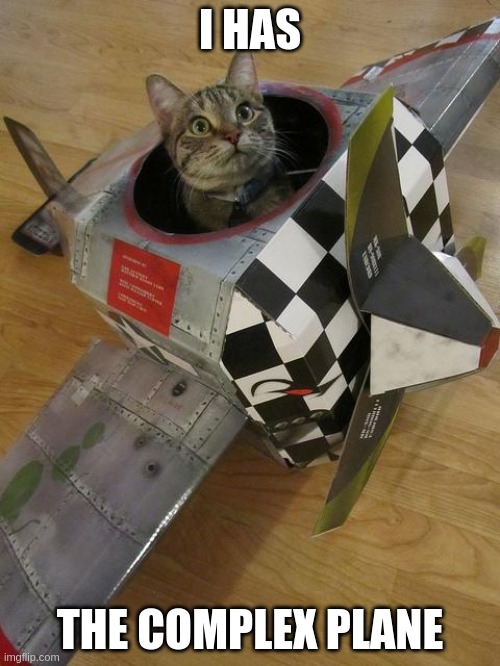 This weight of bonded atoms at this velocity cannot be a wave. Every velocity has a specific mass max that a quantum object can't supersede to have a wavelength. Objects heavier will be classical/local/physical/real. This is also the cutoff to Uncertainty and therefore the Quantum/Classical Boundary. Wave behavior without a wave involved doesn't happen. The unobservable side of QM is the complex math dimension. A mathematical object going from complex to real/classical/local is decoherence. Dark matter doesn't have a wavelength cutoff because it resides in volumes of space that do not have a vector field. Coherent light does not need a vector field to travel through. Black holes generate vector field that do not reach cosmic voids. The EM field is the cause of this new constant.

Wave collapse and decoherence is quantum waves in the complex math dimension being filtered by real numbers. You can describe a quantum wave without complex numbers, but that isn't how nature handles it. QM is not in a duality, Math is. Everything is a math object, if it is being described by the complex math dimension, it isn't physical. A Matter wave (wave with mass) with decoherence in its path will be decoherent (wave packet) from the beginning of its flight. The delayed choice quantum eraser demonstrates this. Decoherence is on a path by path basis. The which-way quantum eraser has two instances of decoherence. The second instance starts a new path that doesn't have a decoherence event in it, so fringes display. The slit the particle took didn't matter.

A Black Hole is in the complex math dimension. It interacts with the real number dimension at the horizon. Matter falling into a black hole becomes complex quantum waves with mass (complex math object). It isn't a hole in spacetime, it is a hole in Real Number Math (vector field). It is a collection of unobservable waves that have mass (gravity). It was thought to go to a singularity because it goes unobservable and outside real math.
A black hole starts with a shock-wave and mass/density that can't be described by the Real Number Math Dimension(vector field). Without that field, matter swaps to complex quantum waves without a wavelength limit.

Black Hole Mass Gap solved
It depends how much mass, real number math can handle. Black Holes have larger than normal neutron stars inside them. At least five solar masses.

The Real Number Math Dimension (vector field) has a max of real numbers it can use to describe density/mass for the volume of five solar masses. We end up with a Black Hole using the complex math dimension. Unobservable.
0 Replies