How long will email last?

Forums: Internet
Email this Topic • Print this Page
Reply Wed 22 Jun, 2005 07:40 am
Pretty much ever since I became dependent on email (~9 years ago or so) I have been worried that it would be cast aside for the next new, probably voice-based communication technology. Voice over internet had me particularly worried.

its especially convenient in a work environment -- having something in writing is an excellent way of CYA (covering yer arse!)

i wouldn't hazard a guess as to what's on the horizon in technological advances...
0 Replies
1
Reply Wed 22 Jun, 2005 07:53 am
Hey- People still write letters and send them through "snail mail". I think that no matter how the technology evolves, E Mail is here to stay.

( I thought the same thing about 8-track and Betamax. Shows to go ya what I know!

Oh, no. Don't know about the German language, Thomas, but text messaging will be the ruin of the English language.

you hit the nail on the head~!

This is all encouraging, thanks. For some reason I was thinking about when sozlet goes off to college, and that we could keep in touch via email, and then thought "but what if there ISN'T ANY EMAIL by then??!" (Yes, I get freaked out by weird things at 1:30 AM.)

Don't worry about college. When Sozlet reaches that age, presidents Jeb Bush and George Bush III will have made secular colleges illegal, and she doesn't seem like the born-again kinda girl who would go to Jerry Falwell's Liberty U.
0 Replies
1
Reply Wed 22 Jun, 2005 08:42 am
That makes me feel MUCH better...

That makes me feel MUCH better...

(Is there a George Bush III? Will Jenna be getting a sex change?)

Did you guys get the Blackadder series?

The Bush dynasty always reminds me of a scene in the Regency Blackadder - when Blackadder, upon meeting British Prime Minister, Pitt the Younger, (the second in the line of Pitt Prime Ministers, after his daddy, Pitt the Elder,) looks at him like something the cat dragged in, and says, in a voice dripping with disdain:

"So - who's next in this interminable, dreary line of Pitts? Pitt the Homunculous?"
0 Replies
1
Reply Wed 22 Jun, 2005 08:54 am
Wasn't one of his nephews a "George P."? The one who speaks fluently Spanish, is in his 30s, looks like a film star, and wooed Hispanic voters for George II in his 2004 campaign? That's who I had in mind, but I could be wrong. Of course, the thought of a transvestite Republican ex-woman president seems very intriguing too ...
0 Replies
1
Reply Wed 22 Jun, 2005 09:01 am
Oh, that one. Jeb's kid, one of Barbara's little brown grandchildren (was that what she said?) 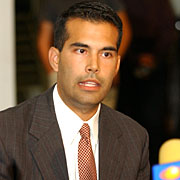