Forums: Animals, Pets And Garden, Pets, Animal Behavior, Animals Laughing
Email this Topic • Print this Page
1
Reply Thu 23 Apr, 2009 03:36 pm
What a good thread.. I'm putting it back at the top of new posts..
0 Replies
1
Reply Thu 23 Apr, 2009 03:48 pm
Not only do my Dolly and Madison doggies laugh, Dolly also argues. When I scold her for misbehavior, she looks me in my eyes and softly barks back at me to stop picking on her. Really funny. 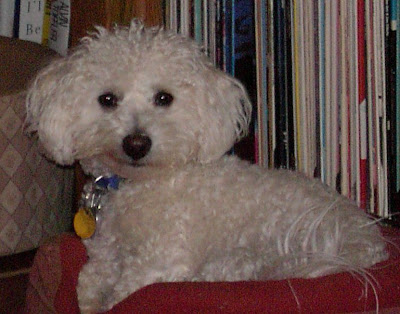 And here he is having a belly laugh: 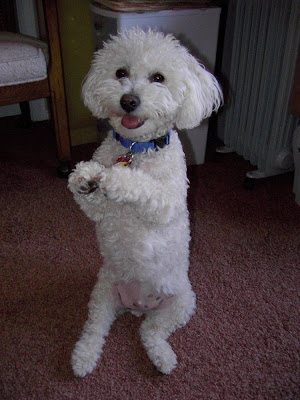 Careful observation of my lab cross convinces me that she has happy, sad and jealous moments. I am not sure if she is actually laughing, but she has reactions at the appropriate times.

Every time I see this thread title I'm reminded of something I saw recently on Animal Planet. It's a show about orangutans ("Orangutan Island," maybe), and one of the young 'uns was making a play for dominance, and is doing silly/ destructive things to get attention. (The orangutan he's trying to usurp, who is out of the picture temporarily, would do that sort of thing.) Nobody's paying him any mind, but he's having fun. He downs a dead tree -- which comes perilously close to the feeding platform, filled with other orangutans -- and they all scatter and shoot him disapproving looks. The narrator explains that orangutans are the only animals besides humans who laugh (well, that's what the narrator says), and then this orangutan cracks up. It was pretty amazing. No doubt that he was LAUGHING (very pleased with the chaos he'd created).
2 Replies
1
Reply Fri 24 Apr, 2009 06:25 pm
@sozobe,
I used to live next door to a rollicking old bull terrier...a dog I anthropomorphize frequently to have a droll, wry, slightly cruel, sense of humour.

This one would occasionally escape from her back yard (when her owners were too drunk to remember to shut the gate properly, I hypothesize) and delighted to torment the two fussy, yappy little toy poodles across the road.

They were imprisoned behind high fences and gates. Their only congress with the outside world was through sound, and by sticking as much of their noses as they could out under the gate.

The bull terrier would scamper across the road, and huff and run around outside the poodle's gate. The noise was enough to alert the poodles, but not enough for their owners to hear from inside.

The poodles would go ape-****!!! Their barking frenzy would eventually get their owners to come outside and yell at them.

The bull terrier would run across the road, and hide behind her fence as soon as she heard the door open.

The poodles would quieten, and then the bull terrier would run back and torment them some more.

This would happen a few times, and eventually the owners would, restraining the frenzied poodles, come out of the gate to see what was exciting the poodles. Nothing!!! A hidden bull terrier would hear the commotion with apparent delight (I could see her grin if I was outside gardening).

The puzzled owners would go back inside, and the cycle would begin again.

Eventually the innocent poodles would be punished by making them go inside.

I confess, I never told on the bull terrier.

Don't forget chimps. They seem to enjoy a good chuckle as well.

0 Replies
1
Reply Sat 25 Apr, 2009 10:45 am
Cats do laugh but they laugh with their tails. Watch them and you will see what I mean. I have four of them and each has a different type of 'laugh' that they twitch out when they find something humorous. All of them have a different sense of humor. Bodhi, my dog, definitely laughs. It comes out as a sort of snort usually followed by a sneeze. He is a pretty serious doggie, but he has his moments of silliness.
0 Replies
1
Reply Sun 30 Aug, 2009 10:49 am
my dog definitely smiles. we dont know how he started doing it, but he does. he looks at you when you scratch his back and smiles, showing his teeth and everything. It is slightly wierd, but its really cute. Ive never heard of animals laughing though!
0 Replies