What are the bleakest books you've read?

Forums: Dystopian Fiction, Novels, Comic Books, Books
Email this Topic • Print this Page
2
Reply Sat 11 Aug, 2018 01:55 pm
@BillRM,
I'm not going to derail this thread any more. You asked how anybody could possibly want to vote you down. I gave you a reason, now back to the topic.
1 Reply
1
Reply Sat 11 Aug, 2018 02:06 pm
HG Well's The Time Machine is pretty grim too, not just the Morlocks and Eloi but the far future when all that's left are crab creatures.
0 Replies
1
Reply Sat 11 Aug, 2018 02:51 pm
I have run into far too many bleak books lately. One was The Tiger Claw: A Novel, by Shauna Singh Baldwin. It is horribly over-written--you know that the heroine will be picked up by the Gestapo early in the novel, and she just drags it out and drags it out. The action in the beginning is canceled by this depressing narrative of the heroine entering France for the SOE, and that switches back and forth with the narrative of her in prison in Germany. I don't know if I'll ever finish it.

The book at Amazon

Then I picked up Three Day Road by Joseph Boyden. It's about two Cree snipers in the Great War (and based on the life of an Ojibwe sniper in the Canadian army in that war). I don't know if I'll finish it, either. It also suffers from being overwritten with a narrative which jumps back and forth. in this case from the arrival of the boys in France and the return of the survivor.

The book at Amazon

The links to Amazon are for information purposes only, and do not constitute a recommendation of their products and services.

I also recently read a rather bleak novel about the occupation of Germany after the Second World War, this in the British zone near Hamburg. It was based on the experiences of some cousins of the author in exactly that situation. You don't want to be depressed when you read it. It is The Aftermath, By Rhidian Brook. Here is a review by The Independent. I made it through that without committing murder or suicide, so maybe you could, too.
0 Replies
1
Reply Sat 11 Aug, 2018 03:17 pm
@izzythepush,
izzythepush wrote:

I'm not going to derail this thread any more. You asked how anybody could possibly want to vote you down. I gave you a reason, now back to the topic.


LOL sorry but both books was on topic and not off tropic in any way. Being bleak does not mean not connection too closely to reality.

It is interesting that Robert Heinlein could not bring himself to write a story in the 1950s of the takeover of the US in the year of 2016 by a religion dictator winning the presidency by way of the electoral college as he found such a book would be too bleak for him to write and for the readers to read an yet real life is almost matching fiction in that regard currently.
0 Replies
3
Reply Sat 11 Aug, 2018 04:54 pm
You want bleak, read Kafka. A guy wakes up and he's transformed into a giant roach. Or a guy's arrested and he has no idea why. This expressionist literature is about as optimistic as expressionist art, Munch and the Germans.

Hands down.
0 Replies
1
Reply Sun 12 Aug, 2018 07:05 pm
Others here have noted various novel of Thomas Hardy. I agree. Kafka's Metamorphosis is the bleak expression of an unsettled mind.

I find Charles Dickens mostly uplifting: there are indeed rather bleak characters inhabiting most of his novels, but they are generally the counterpoints to the struggles and success of the main characters. He had the ability to create memorable characters, both good and bad, and do so as well with a gentle air of irony about them.

Dostoyevsky's "Notes from Underground" and "A gentle spirit are likely the bleakest things I have ever read.
0 Replies
1
Reply Tue 14 Aug, 2018 05:12 am
The Trial by Joseph Kafka comes to mind here.

1984 has already been mentioned... that was pretty depressing as well.
0 Replies
1
Reply Tue 14 Aug, 2018 06:02 am
You've just reminded me of a novel by a countrywoman of yours--In a Dark Wood Wandering: A Novel of the Middle Ages by Hella S. Haasse. Charles, le Duc d'Orléans, was captured at the battle of Azincourt in 1415, about a month before his 21st birthday. He spent 25 years in captivity in England, until he was ransomed by the Duke of Burgundy in 1440. He was married to Bonne of Armangac, a strategic marriage as the Count of Armangac became the leader of the pro-Valois faction at court--the court of poor, mad King Charles VI. Whether or not it is true, I cannot say, but the novel portrays Charles as deeply in love with Bonne, who died while he was in captivity. I wouldn't call it bleak, but it is a very sad story.
2 Replies
1
Reply Thu 16 Aug, 2018 08:05 am
@Setanta,
I can't retrieve its name but Norman Spinrad wrote it.

It was so unrelentingly violent and devoid of meaning that it was the first book in my life that I didn't finish.

Frankly, these days I operate by the theory that writers in general are intelligent human beings who get so frustrated and down with the state of the world today that they write as a form of therapy. Not really sure what that would make of Pullitzer Prizes though...
1 Reply
1
Reply Thu 16 Aug, 2018 08:20 am
@najmelliw,
The protagonist of my novels is an amoral psychopath, I need to write to get him out of my head.
0 Replies
1
Reply Thu 16 Aug, 2018 05:24 pm
@spikepipsqueak,
Does this jog your memory?

Adopted orphan boy suffers years of abuse and is betrayed by the woman he loves. He spends the rest of his life obsessed with wreaking vengeance against those who abused him, Catherine, the woman he loved, and innocent bystanders.

A powerful and fully enjoyable but bleak novel.

The Masterpiece Theater production with Richard Cavanaugh and Orla Brady is even better. 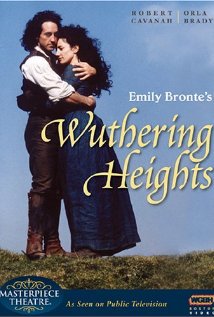 Myself I consider a very bleak story one that ends with no possible outcome in the future.
1 Reply
1
Reply Thu 23 Aug, 2018 08:41 pm
Jane Eyre is something similar to Wuthering in that the setting and most characters are extremely bleak. Starting with her aunt and cousins at Gateshead to the Lockwood orphanage, most of the characters are despicable and the situations hopeless. Then she arrives at Thornfield Hall, which reeks of a dark, foreboding secret. Rochester is likeable enough, but he's got a skeleton or rather an insane wife in the closet who eventually burns the place down leaving Rochester blinded.

The whole situation seems bleak and hopeless, and except for Jane Eyre's positive and confident attitude, it would be hopeless.
1 Reply
1
Reply Wed 5 Sep, 2018 12:10 pm
@coluber2001,
0 Replies
1
Reply Wed 5 Sep, 2018 04:16 pm
@Linkat,
[Spoiler Alert]
Well it didn't end well for the main protagonists we start the book with. It only ended well after they were all dead.
0 Replies
2
Reply Sat 20 Apr, 2019 12:47 pm
@tsarstepan,
I agree with the responder who said The Road by Cormac McCarthy. I also felt Hunger by Knut Hamsun was bleak.
0 Replies