Forums:
Email this Topic • Print this Page
Reply Wed 2 Aug, 2017 07:59 am
Churchill’s hunger for knowledge was matched by an accompanying thirst for alcohol. There was never any doubt as to who was to pay for the drinks. As the most junior member of the party, Macrae was made an honorary member of the mess, which meant that he ‘was entitled to buy them drinks at around 8d per shot’

https://www.europeanbeerguide.net/beer1917.htm - look down the page to the notes portion - very helpful - and then further down to

BATTLE OF THE BAR.
----
Weekly Dispatch, April 8th 1917
There were some remarkable fluctuations in the price of beer in London yesterday, with a tendency to go back to the old prices.

At the Black Dog in Shoe Lane, London, bitter was only 3d a half pint - 2d. less that the price fixed by the Licensed Victuallers' Central Protection Society London: at the Temple in Tudor Street the charge had also gone down to 3d.; at the Mail Coach in Farringdon Street it was still at 5d.; at Gatti's Restaurant in the Strand itt was 4.5d.; at the Wellington Restaurant, Fleet Street, 5d.

0 Replies
3
Reply Wed 2 Aug, 2017 09:43 am
This is pre decimal money. Now we have pounds sterling and pence, and like most places there's 100 pennies to the pound. The symbol for the pond is £ and the penny p. Shortly after introduction the pennies were referred to as new pence but not any more. 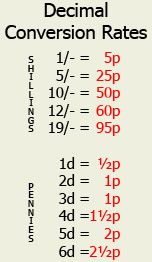 Librae, solidi, and denarii. From the Romans.

It was what we were used to. I was 6 weeks short of my 19th birthday when the British currency was decimalised. The tabloid newspapers were full of how old people would get confused by the new fangled money. Also that crooked shopkeepers would use the change to cheat customers. It was regarded by many as just one more awful aspect of the modern world along with sex, long-haired hippies, and the abolition of hanging. Like the shift from Imperial weights and measures to metric. We were drilled in school. I still remember that a third of a pound was six shillings and eightpence. We had to work out problems in arithmetic lessons, e.g. How much would 3 stone, 2 pounds and 7 ounces of walnuts cost if they are priced at £11.2s.6d per hundredweight? People in the real world used books called "ready reckoners" which had tables of stuff like that, price per pound, cubic foot, gallon, etc.

I was just a nipper when it happened, but prior to decimalisation I could take a sixpence to the shops, buy a Beano 4d and get 2d change, enough for two penny chews. Post decimalisation my sixpence was worth 2 1/2 new pence, a Beano cost 2p and I got 1/2p change, enough for just one, (now ha'penny) chew.) Bastards.
0 Replies
1
Reply Wed 2 Aug, 2017 11:31 am
@Region Philbis,
You're telling me, we had to listen to **** like this. (LSD is mentioned in the second line.)

I just got this. All that pre-decimal acid (really!) must have pickled my brain.

How much would 3 stone, 2 pounds and 7 ounces of walnuts cost if they are priced at £11.2s.6d per hundredweight?