Forums: Unvanquishable
Email this Topic • Print this Page
Reply Sat 24 Jun, 2017 12:55 pm
I really feel he could be Prime Minister after seeing this. After he quoted Shelley's The Masque of Anarchy, the gigantic crowd erupted. It was amazing! "Unelectable" they said. Suddenly politics looks interesting. Something has started in Britain.

Rise, like lions after slumber
In unvanquishable number!
Shake your chains to earth like dew
Which in sleep had fallen on you
Ye are many — they are few. 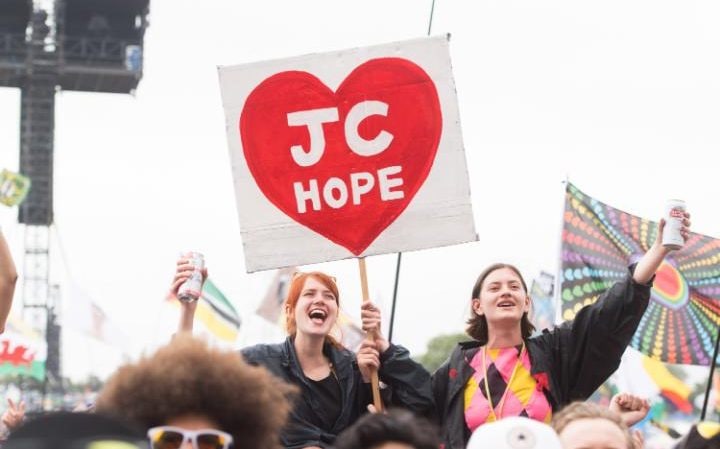 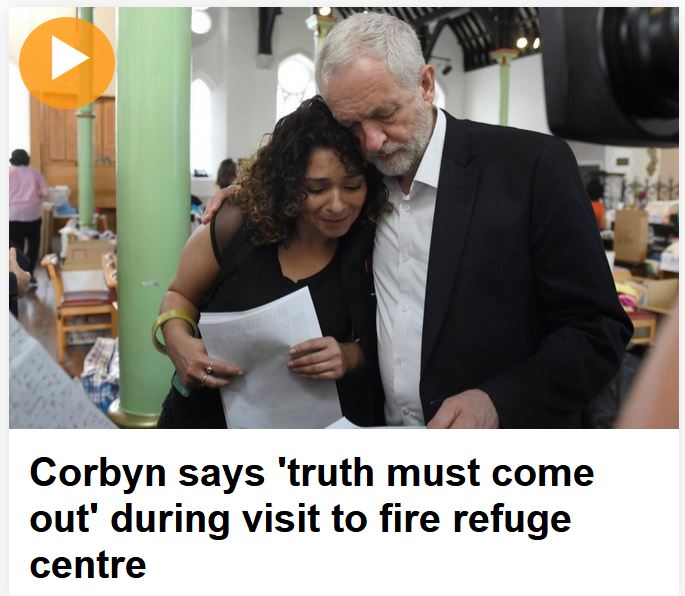 0 Replies
1
Reply Sat 24 Jun, 2017 07:39 pm
@centrox,
Those who oppose him speak of his "unrealistic" foreign policy. What is his foreign policy, as regards NATO, Russia, and whatever else is significant?
2 Replies
2
Reply Sat 24 Jun, 2017 11:31 pm
@Blickers,
Corbyn claims Britain's foreign policy is leading to blowback from the Islamic world, resulting in terrorist attacks on Britain. Many conservative types find that view unacceptable and unpatriotic. He wants fewer military attacks on the Islamic world. At the end of the day, I don't think most Brits support unprovoked military intervention into the Islamic world.

I personally have questions, though, about how he views a couple foreign powers, Israel and Russia.
1 Reply
2
Reply Sun 25 Jun, 2017 12:19 am
@centrox,
He's certainly got the momentum behind him. I was fairly certain we'd be choosing another leader after an electoral meltdown right now. It's good to be wrong.
1 Reply
3
Reply Sun 25 Jun, 2017 12:42 am
@Kolyo,
Kolyo wrote:

Corbyn claims Britain's foreign policy is leading to blowback from the Islamic world, resulting in terrorist attacks on Britain.

I would say that's a convenient (to the right wingers) over-simplification, in that it portrays him as putting forward an inane tit-for-tat type of explanation for terrorism where it's our "karma" in some way, or a moral thing - we do bad and they do bad back, whereas what he has actually said is that ill-judged and ill-thought-out interventions in Islamic countries - Afghanistan, Iraq, Libya - have led to vast ungovernable spaces within them where the jihadis have organised and recruited. (That is is, a practical explanation, and not one he dreamed up himself). There does seem to be a wilful tendency across the media to portray Corbyn’s supporters, Corbyn himself and his policies as if they were mindless or worse.

Many conservative types find that view unacceptable and unpatriotic.

Many "conservative types" have opposed questioning of the political judgements that led to military disasters such as Gallipoli, Suez, etc, and they used the "unpatriotic" smear, as if only they held the right to decide what that means.

At the end of the day, I don't think most Brits support unprovoked military intervention into the Islamic world.

I think most Brits are reluctant to attack anyone just for the sake of it, but would support necessary action that actually protects and safeguards us.

I personally have questions, though, about how he views a couple foreign powers, Israel and Russia.

Human Rights: Oppose violations of international human rights law, in particular the detention of children and detention of political prisoners without trial.

The Wall: Oppose the continued construction of the Separation Wall on Palestinian land, a direct contravention of international law.

The Blockade: End the siege on Gaza and ensure the free flow of aid and trade

Illegal Settlements: Call for a complete freeze on illegal settlement growth in order to save any hope for a viable two state solution, and end all trade and investment with illegal Israeli settlements on occupied Palestinian territory.

Russia:
He is not an admirer or supporter of Putin’s foreign policy, or of Russian or of anybody else’s expansion. He has called Russian intervention in Syria "inexcusable". He is opposed to "... both NATO expansion and Russian expansion—one leads to another, and one reflects the other.’

There is an interesting opinion piece by Jonathan Rosenhead in the Israeli Ha'aretz newspaper, published just before Britain's General Election:

I'm a British Jew, and I Don't Fear a Corbyn Victory. I'd Welcome It

The caricature of Jeremy Corbyn as a tool of Trotskyites, a lover of dictators and a shill of anti-Semites is unhinged and wrong

Those who oppose him speak of his "unrealistic" foreign policy. What is his foreign policy, as regards NATO, Russia, and whatever else is significant?

He's certainly got the momentum behind him. I was fairly certain we'd be choosing another leader after an electoral meltdown right now. It's good to be wrong.

I was afraid it would happen. I didn't believe the 'unelectable' smears, but I was worried they would persuade floating voters. It's good to be proved a coward. It's amazing how all the journos and people in the Labour party who slagged him off are falling over themselves to say they always supported him.

Was ever there a more crassly inept politician than Jeremy Corbyn, whose every impulse is to make the wrong call on everything? It’s not excitingly flamboyant red radicalism that has done for Labour, but his sluggish incompetence at the absolute basics of leadership.

Nothing succeeds like success. Jeremy Corbyn looks like a new man, beaming with confidence, benevolence and forgiveness to erstwhile doubters, exuding a new father-of-the-nation air of authority, calmly awaiting his imminent elevation to power.

I will never again read Polly's columns without thinking of this.

Giving away my age here, but I used to like Shirley Williams. her husband, Bernard Williams, was a famous moral philosopher who did his National Service flying Spitfires. I don't think there are many of those.

Do you still like her? She reminds me of a sanctimonious school headteacher who hasn't actually been in a classroom herself for years.


I liked her & thought she was sound when she was in the Labour Party, a Daily Mirror journalist, and in Harold Wilson's first government. Later, in the 1970s under Wilson and then Callaghan she was a Cabinet minister. I began to see her as more and more on the right wing of the party, and when she jumped ship to co-found the SDP that was it really. She spoke against gay marriage in the Lords in 2016. I don't know if she has changed much, but I think a lot of scales have fallen from my eyes.

Btw, as a local lad what are you doing calling it Glasto? When I lived there we always called it Pilton.

I'm only local by adoption, I grew up in Herne Hill, in South London, and only moved to Bristol when I was 19. If I lived in Somerset I might talk about "Pilton", I suppose, but that's the village, not the festival, surely? Anyhow, I chose "Glasto" because that has a cool, down-with-the-kids sound to go with 'Jezza'. Like saying "Me and Bazza and Johnno got off our tits at Glasto when we like totally smashed an ounce of puff". I try to be modern and edgy when talking to young people, and I can tell it works because of the way they smile at what I say to them.

Wasn't there a recurring piss-take of her brand of 'journalism' in Private Eye where opposing 'positions' were adopted in alternate paragraphs of the same column?

That's her style. Her on-off relationship with Gordon Brown was commented upon. "The stream of articles singing his praises, then condemning his failures, then giving him one more chance, then repeating the pattern have all the sophistication of pulling the petals off a flower while saying he loves me and he loves me not in turn."

0 Replies
1
Reply Sun 25 Jun, 2017 06:33 am
To clarify something: I have been worried about the allegations of anti semitism in the left wing of the Labour Party, and the extent to which Jeremy Corbyn agrees with it, and if not, has worked to combat it. I am endeavouring to satisfy myself on this issue.

You can find, characteristally, arguments for and against in the UK Jewish Chronicle:

I was not alone among young Jews in backing Labour. You probably even know a few of us.

Yes, there are questions to be asked about antisemitism in the Labour Party, and yes, many people have concerns about Mr Corbyn’s interactions with antisemites. But for me, that was far outweighed by what was at stake in this election. Just months after my 18th birthday the Conservative-led government began to tear chunks out of the country’s welfare system under its programme of austerity after the 2008 financial crash.

Forgive me for this is a point I feel I must make as a Jew.

If Jeremy Corbyn and his followers do not suffer a gigantic defeat in this election, it will be an utter, complete, ghastly disaster for Jews.

It will mean that despite all that has happened in the past two years, all his supporters have said about Jews, people — even Jews, for goodness sake — can still support him. What’s a little antisemitism between friends?

The second one is by a Conservative peer in the House of Lords, so, hmmm...

Corbyn has repeatedly condemned anti-Semitism and saying that anyone making an anti-Semitic remark is “auto-excluded from the party.”

John McDonnell, the shadow finance minister and a long-standing Corbyn ally, told The Independent that any party member found by an investigation to be expressing anti-Semitic views should be expelled for life. “If people express these views, full stop they’re out,” McDonnell said.