https://www.boem.gov/Ocean-Current-Energy/
2 Replies
0
Reply Wed 15 Mar, 2017 01:48 pm
@maxdancona,
Max of course you're right, esp directed at lazy folk (me). However, there's some sense in the hope that the q'er might stimulate one of our experts; or someone piqued by his laziness and incompetgence, Terribly Angry at All Times About Nearly Everything, might provide a link, as you have

1 Reply
3
Reply Thu 16 Mar, 2017 03:08 am
The key problem with tidal flow power generation, is that of encrustation by molluscs. The regions with the highest tidal movements (more difference between high and low tides) are tropical, and that is where the greatest growth rates of organisms also occur.

I'm liking the dock-mounted generation systems, that rely upon rather gentle wave action, to raise and lower hydraulic rams, connected to floats. The floats can grow as many moluscs and other growths, without affecting the operation of the device.
1 Reply
1
Reply Thu 16 Mar, 2017 03:17 am
@TomTomBinks,
Back in the 1970s we had a programme called Tomorrow's World this showcased technological innovations. I remember seeing Pong being played for the first time.

I also remember seeing an electricity generator based on lake tidal movements, the inventor was later interviewed some twenty or thirty years later. He said he had not been contacted because nobody was interested. You can speculate on why that might be until doomsday.
0 Replies
2
Reply Thu 16 Mar, 2017 03:34 am
@Walter Hinteler,
Here's some newer ideas, Walter.

Wave power lies not in huge plants but in a combination
of on-shore generation and near-shore generation (using a
different technology) focused on meeting local or
regional needs. If this system prove to be economically
possible, only 0.1% of the renewable energy within the
world's oceans could supply more than five times the
global demand for energy,
The Pelamis Wave Energy Converter is a revolutionary
concept resulting from many years of engineering
development. It was the world’s first commercial scale
machine to generate electrical
energy into the grid from
offshore wave energy and the first to be used in
commercial wave park projects. In Portugal, Pelamis
System is now proving to be successful.

The regions with the highest tidal movements (more difference between high and low tides) are tropical, and that is where the greatest growth rates of organisms also occur.


The world's largest tidal range of 16.3 metres (53.5 feet) occurs in Bay of Fundy, Canada, and the United Kingdom regularly experiences tidal ranges up to 15 metres between England and Wales in the Severn Estuary.
In France, it's at some places 12 meters (and more). RanceTidal Power Station, the first and oldest still working tidal power station of the world (opened in 1966) uses a tidal range of 10 m and more (today, e.g. the first low tides was 1.8 m, the following high tide 11.61 m).

Those mentioned medieval tidal mills are even to be found on rivers more inbound, today the still working Woodbridge Mill (Suffolk/England). But in nearby Ipswich had been some even earlier (in 1446, the two mills of Stoke Mill were a tidal mills, one for grain and one for fulling).

I recall a Japanese experimental ship, where power is generated simply by passing water through a metal "hoop" like the head of a manta ray or whale shark's maw.

That - see:
Yamato 1 - was a "magnetohydrodynamic drive", not at all connected to tide.
0 Replies
1
Reply Thu 16 Mar, 2017 10:42 pm
@Walter Hinteler,
Yes, this idea is old but why isn't it being used? The ocean currents are a steady and massive source of energy. We should be using this in the same way we're using hydro-electric now. I realize there are difficulties. There were difficulties in constructing massive dams to utilize hydro but we overcame them. The ocean currents are an even greater and more dependable source than any river. Why do people whine about how to generate clean electricity when the solution is right there in the ocean?
1 Reply
1
Reply Fri 17 Mar, 2017 01:53 am
@Walter Hinteler,
Walter Hinteler wrote:

Those mentioned medieval tidal mills are even to be found on rivers more inbound, today the still working Woodbridge Mill (Suffolk/England). But in nearby Ipswich had been some even earlier (in 1446, the two mills of Stoke Mill were a tidal mills, one for grain and one for fulling).

I spent two years living around there. It's where this was set.

If the cost of generating electricity from one method, is significantly higher than other methods, it will never be used. Remember that costs include construction costs, and maintenance costs which are quite a bit higher at sea than they are on land. 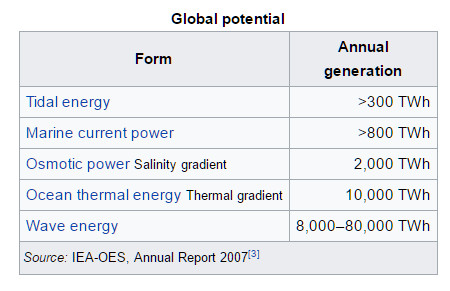