Forums: Dinosaur
Email this Topic • Print this Page
Reply Fri 9 Dec, 2016 08:59 pm
National Geographic reports that a fully intact tail of a 99-million-year-old dinosaur was found preserved in amber, according to a report published Thursday in Current Biology. We're talking a tail with bones, soft tissue, and even feathers that has been preserved for millions and millions of years.

The research was led by paleontologist Lida Xing of the China University of Geosciences and was funded partially by the National Geographic Society's Expeditions Council. National Geographic reports that this is the very first time scientists were able to "clearly associate well-preserved feathers with a dinosaur," and this particular sample-which is approximately the size of an apricot-gives scientsts a "better understanding of the evolution and structure of dinosaur feathers."

The tail itself is about 1.4 inches and covered in "delicate feathers." Though the tail sample itself had eight vertebrae, it looks as though it's from the middle or end of a long tail that may have had over 25 vertebrae. Researchers think the tail belonged to a juvenile coelurosaur, which is part of a group of dinosaurs that includes tyrannosaurs and modern birds.

However, that said, researchers note that if the entire tail was covered in the same kind of feathers found in the sample, the dinosaur "would likely have been incapable of flight" as the feathers may have functioned to signal or regulate temperature.

A study of the chemistry of the sample showed that ferrous iron was present, which was a decomposition product from the blood hemoglobin once in the dinosaur's soft tissue. "The fact that [the iron] is still present gives us a lot of hope for future analysis, to obtain other chemical information on things like pigmentation or even to identify parts of the original keratin," McKellar told National Geographic. "Maybe not for this particular specimen, but for other [samples] down the road...Maybe we can find a complete dinosaur."
Type: Discussion • Score: 8 • Views: 1,122 • Replies: 30
1
Reply Fri 9 Dec, 2016 10:58 pm
So now they're going to have to redraw all those fearsome, leathery Tyrannosaurus Rex pictures to have delicate, fluffy feathers. That's going to shoot T. Rex's image.
1 Reply
2
Reply Fri 9 Dec, 2016 11:18 pm
@Blickers,
With teeth like that, who needs image.

Why, is a Coelurosaur some kind of Primo Dinosaur?

No longer a reputable source for science news...
2 Replies
1
Reply Sat 10 Dec, 2016 01:56 pm
@TheCobbler,
Here is the Current Biology site. The source of the National Geographic story.
http://www.cell.com/current-biology/home
0 Replies
2
Reply Sat 10 Dec, 2016 02:05 pm
@TheCobbler,
The report has been published in Current Biology. However, the project was funded in part by a National Geographic Expeditions Council grant.

National Geographic reserves the right to assign coverage of grant projects by its own media teams.

0 Replies
1
Reply Sun 11 Dec, 2016 05:34 am
@edgarblythe,
Monterey Jack and I were discussing this find when he brought it up in another thread. Theropod linneages to birds have always mentioned "protofethers" as one of the necessary prt of the "bird evolution kit"
Yet in the past decade, we dont get to highlight (more importantly) the many reports of the other groups of saurischian and ornithischian dinosaur families that sported FEATHERS.
I was especially interested in the evolution of the family "ceratopsia", which contained the vegetarians like di-ceratops, triceratops etc etc.
The earliest of these species actually showed both proto-feathers and scales in some of the earliest (late J and early K fossils). There werent a lot of specimens cause the feathers fossils need fine grain
sediments so we can actually see em. What then happened in the fossil record is that feathers were apparently less a successful an option and by the end of the K, all the ceratopsians were bearing scales.

This sorta made the argument that most all species of dinosaurs (not just coeleosaurians or troodonts or the rest of the raptors) carried feathers because they were possible the best candidates for birdie evolution.

Just remember though, birds first made their appearances a couple of weeks before these specimens. It appears that feathers are just one more of a series of body cover options that nature was futzing with

0 Replies
1
Reply Sun 11 Dec, 2016 08:30 am
It has been a long time since people began writing about feathered dinosaurs. Why not? Feathers had to originate somewhere. Birds must have made the best use of them. What I am interested in the most is when and where warm blooded originated.
1 Reply
1
Reply Sun 11 Dec, 2016 08:44 am
@edgarblythe,
Well, they had mammals before the asteroid hit 65 Million years ago, so warm blooded goes back at least that far. And some evidence occurred that indicated at least some of the dinosaurs were semi-warm blooded.

By the way, the opossum, North America's only marsupial, has a body temperature a couple of degrees lower than placental mammals, (which is now almost all mammal species). It makes the opossum resistant-but not immune-to rabies since the pathogen has a hard time existing in blood that temperature. So warm bloodedness seems to be a gradual, as opposed to a sudden, thing.
1 Reply
2
Reply Sun 11 Dec, 2016 10:05 am
@Blickers,
mammals have been dicovered in mid Triassic and specukated to be there in late Permian. When the Cenozoic kicked in at K's ending events, at least 7 orders of mammals had gone extinct within the paleocene and eocene so that weve only got monotremes, marsupials, and placentals today. Several orders , such as the Haramiyida, could have been more advanced mammalian like reptiles left over from the Permian. The teeth patterns are quite reptilian.
The left over features in groups that have disappeared (or failed to mak it through a catastrophe) give us so many clues as to the fact of gradual evolution (all of which nicely fits within certain earth wide
occurrences).
We can easily see the bird and reptile features in an archeopteryx that the argument is hardly worth it.
0 Replies
1
Reply Sun 11 Dec, 2016 10:09 am
The mammals are interesting too, but I really was focused on Dinosaurs.
1 Reply
1
Reply Sun 11 Dec, 2016 10:19 am
@edgarblythe,
actually I was interested in the significance of fethers as an indicator of evolutions road. Mammal and reptiles have so much in common by direct common ancestry that we study one to understand the other
0 Replies
2
Reply Sun 11 Dec, 2016 10:44 am
http://www.cbc.ca/radio/quirks/phantom-pain-virtual-reality-drug-resistant-bacteria-1.3885033/check-out-this-99-million-year-old-dino-feather-1.3885290

Nice short (nine minute) interview with Dr. McKellar whose team in Saskatchewan did the initial analysis of the feather from the sparrow-sized dinosaur. 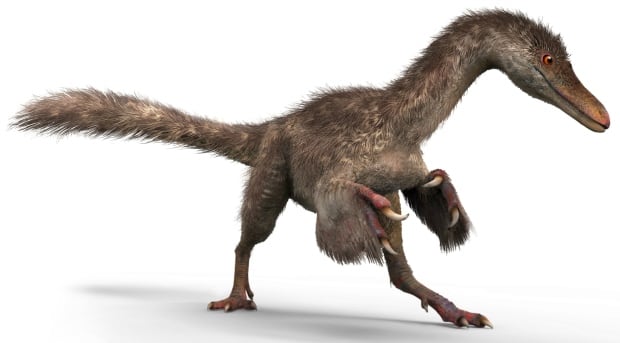