Forums: Education, Poverty, Charity, Homelessness, Healthcare
Email this Topic • Print this Page
Reply Tue 31 May, 2016 04:20 am
Well it is not like people who choose a bathroom is the reason why there is starvation and poverty.

We are barraged by many issues and each of them we are passionate about such to the point that we can sometimes forget the weight of some issues.

While people argue over where one should use the bathroom there are homeless and hungry and uncared for people out there.

This is not to belittle those who advocate for equality gender rights. I am not throwing gender identity advocates under the bus to promote anti-starvation causes.

I am just saying the current trend and popularism of an issue does not somehow escalate its value.

A hamburger at McDonalds used to cost 50 cents. The farmers back in the day could provided a hamburger at that cost.

Now, with inflation and new technology that makes farming easier and "better". A hamburger costs a dollar, the cost has doubled.

Is this because of the hidden cost of energy or the need for clean water sources that drive up the price of food?

Is this because of foreign regulatory trade or speculation of commodities on Wall Street?

Well it is not that food really costs a lot but some people have no money.

They can be a young child that goes to school or an adult that is old and/or disabled. Someone needs to provide for these people beyond doubling the price of a hamburger and saying, good luck!

A welcoming and giving society that cares for the weak and young.

We have refugees that will want to go back home and rebuild once the fighting stops in their country .

We need to care for people of all cultures. We do not blame people for being victims.

Society is progressing, evolving and growing to include the rights of many who have been deprived. Though seemingly, even the most wicked of people have a right to shelter and nourishment (perhaps before their execution). It is what we refer to as humanity and as treating someone humane.

Hunger and homelessness can inflict any social archetype, it is not necessarily bound by political leanings. There are poor, homeless republicans and democrats.

So it is not just to sound the alarms but to say which political party is concerned about poverty and hunger programs like feeding the elderly and school lunch programs, shelters and soup kitchens.

Here is where it gets complicated. Feeding the poor is based upon a delicate handshake between the government and private (often religious entities).

Charities are often private religion organizations who do a service for society i.e. the homeless, elderly and children.

Yet the government also provides some of these services.

So the government pays huge amounts to the charities to provide services to social network programs.

So the churches have the government over a barrel this is why they think they can take tax payer money renege on the deal, hold the government ransom unless the government bow down to their twisted view of god and (pro life).

If that person is blaming the helpless, then, this is the reason why we have homelessness and poverty in our country.

By voting and removing that person from office and replacing them with a person who puts social programs first, that is pro education, that is pro health and nutrition and pro science and pro life.

Only by using your vote as a mandate to say to these private organizations no, pro life does not mean pro business at the expense of people pro tax breaks for the rich and using anti abortion to attack women's rights. Attacking a woman's rights is not pro life either.

Allowing a women to protect her own life from health related issues is pro life.

So if you want to end homelessness vote out a republican senator or house member.

Then the rich and their Cayman islands tax retreat will be brought to bear and the hypocrisy of the churches will be faced with constitutional law.

It is up to "we the people" to see that our elected officials do not have a warped religious sense of what pro life means and what is important to society.

So once we decide which bathroom to pee in and every last right is written in the law books, can we please get to the work of the people and feeding the poor, educating the unlearned, sheltering those lost in the storm of life.

We entrusted this duty to society to these religious agencies and they have tried to use this as a reason to not help the poor with their own money.

Why do most people donate to the church? Because of the charity they are associated with.

I do not think they donate to the church so the church can then subvert rational western ideas with barbaric biblical philosophies. I like to think that healing the lame and feeding the poor is a top priority in the mind of a person who donates money to the church.

But to take this money then and use it as wedge to promote backward ideologies is obscene. Racism, hating the poor, denigrating women and minorities.

So if you follow their hate and abandon people they will still not ever change.

They simply do not care about providing the service to the people that they have already been paid to provide.

Like prisons for profit. At some point the government needs to step in and say, either provide the task you have been commissioned to do and do it with a smile and please do not treat some with privilege but treat all equally and do not discriminate because of race religion or sexual orientation etc.

We need liberal judges and liberal courts that will restore integrity to our social net and education systems.

We need politicians who will not take bribes from big business but instead take the tax money revenue that people pay into the government then use that revenue to actually feed the people.

It is really the fundamental ideal of government as being a force of civility.

That government and its regulation provides the standards the things are weighed and measured upon so everyone gets a fair deal.

It is a sorry day when a soup kitchen run by a church (funded by tax breaks) closes its doors because they do not believe in gay marriage or a women's right to choose.

It shows that the system is broken and the government needs to either regulate these services more or choose another system of providing them.

People are starving and wasting away in the presence of our apathy, religious charlatans and hypocrites cut food stamp benefits for veterans.

... healing the lame and feeding the poor is a top priority in the mind of a person who donates money to the church.

But to take this money ... and use it ... to promote backward ideologies is obscene. Racism, hating the poor, denigrating women and minorities. 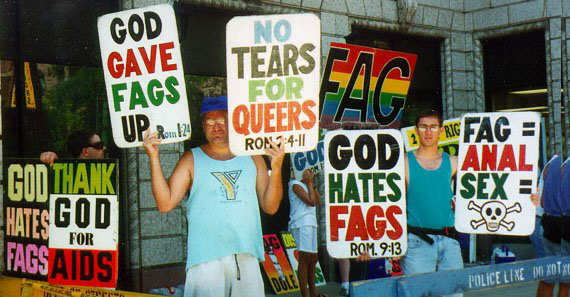 Should these folk be running a tax exempt church?

Would you feel welcome in their "soup kitchen"?
0 Replies