The era of the $5 computer has arrived.

The latest version of the Raspberry Pi is even being given away free with a magazine. Not a subscription. Just buy the single issue of Magpi and you get a free computer.

Behind it all is the Raspberry Foundation, a U.K. charity dedicated to computer education and cheap technology. The latest Raspberry Pi, called the Zero, is part of a movement that combines inexpensive hardware, collaboration and open source software to drive prices down and create an explosion of new uses for computers.

One place keen on the ultra cheap computers is Hackspace, a place where hobbyists meet to swap ideas and work on technology projects in Vancouver.

Hackspace director Rob MacKenzie has one of the devices hooked up to a monitor and keyboard to show that, at its heart, the Pi can handle word processing and web browsing like far more expensive computers.

Nearby, inside a vending machine alongside Snickers bars and other junk food, is a row of cheap computer parts including earlier versions of the Raspberry Pi.

"I'm definitely waiting to get my hands on some of the $5 ones. They're really hard to get right now. They've been sold out everywhere I can see, but they're pumping them out as fast as they can."

Hackspace member Jon Grieman is using a Pi as the brains behind a futuristic pinball machine he's designing.

He says it brings powerful computing down to mere pocket change.

"It's a cup of coffee. I can have a couple sitting in a box and when I need one pull it out and leave it in a project."

have you tried Raspberry Pi?

what would you use one for?

Got an old keyboard? got an old mouse? got a monitor or a t.v.? apparently a Raspberry Pi and a few cords have you in business.

Given that the keyboard and monitor costs (if you don't have old ones) add up to about the cost of a usable tablet, the $5 Raspberry Pi seems on target.
1 Reply
1
Reply Mon 21 Dec, 2015 06:20 pm
@ehBeth,
Yep. I still have my blueberry mac (it was so pretty). The hard drive was removed with no transference of stuff (money, honey, but I still have that too).

I'd rather get a much newer used mac than the one I have rather than this raspberry thingy, but hey, I'll read up.

You might have noticed that I tried to youtube Raspberry Beret but it was some copywrited version, thus nixed, and then decided not to digress on the thread just yet. But, I've three berets and none of those are raspberry colored. One could wear one while computing..
1 Reply
1
Reply Mon 21 Dec, 2015 06:26 pm
@ossobuco,
I prefer trapper hats when it's a cold winter day

One winter I wore it quite a bit while posting on Izzie's shipboard antics thread.
1 Reply
3
Reply Mon 21 Dec, 2015 06:51 pm
My friend has one of these. It is very cool for tech hobbyists. I don't think it will make non-tech geeks happy. The Raspberry Pi is usable... kind of. Anyone used to the performance of a computer that is less than 15 years old will not be happy. Yes, you can do browsing and word processing on it, but this will be really slow since there isn't much computing power.

What makes the Raspberry Pi really cool is that you can hook things to it, and use it as a control computer for whatever little devices you can think up. My friend runs a little light display with one. Other people use them to hook up little sensors... or to hook up a camera to automatically snap pictures under certain conditions.

If you have any kind of little electronic project that needs a programmable control, the Rasberry Pi is a good choice.

I am looking at buying a little board that will let me hook up a Raspberry Pi to our Lego Mindstorms set... this will let me build robots with the Lego motors and sensors. My daughter already has great fun with the Mindstorm parts. Google just introduced a whole new kind of Chrome OS computer—a dongle that plugs into any HDMI-equipped display. It’s called a Chromebit, and it isn’t your run-of-the-mill streaming stick. For under $100, you’re looking at a full computer that plugs right into your TV.

A common use for it is to make a little media streaming box to attach to your TV, and there too it is not a great fit for me as I prefer the more polished experiences of things like the Apple TV.


This is the Pi Zero 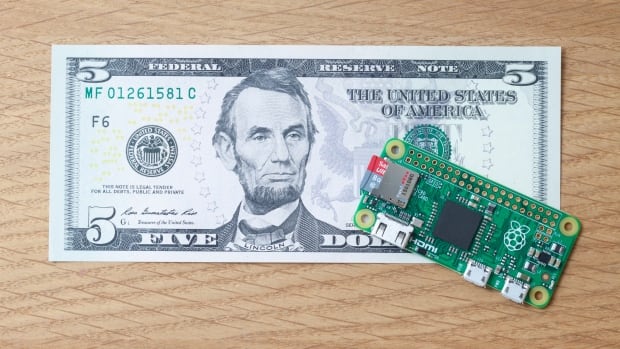 When I remember the old computer buildings/rooms from the 1950's/60's and then look at that darling thing, I marvel.
1 Reply
2
Reply Tue 22 Dec, 2015 10:59 am
@ehBeth,
It has a 1ghz processor which makes it faster than any home computer prior to 2000.
1 Reply
1
Reply Tue 22 Dec, 2015 11:00 am
@parados,
Do you have to add your own operating system? Or is it Linux based?
1 Reply
1
Reply Tue 22 Dec, 2015 11:07 am
@tsarstepan,
I would guess like the original Pi it comes with no sd card and no installed software. Pi has downloadable software with different versions of linux, and opensource media center. The most recent version of the Pi (Pi2 model B) is capable of running windows 10. (Reports are it runs slow.)

You can also pay a little more to buy a Pi with the software already on an sd card.

At one point there was an attempt to put android on Pi.

Here are some of the OS available.
https://www.raspberrypi.org/downloads/
1 Reply