Here you can listen to Under the Bridges of Paris
http://www.youtube.com/watch?v=6paByA6wBSE

0 Replies
2
Reply Sat 15 Mar, 2014 04:57 pm
Bridge of new ill repute: the addition to the San Francisco Bay Bridge. Don't get me started - the SF Chronicle has chronicled the shortcomings. The least shortcoming, compared to apparent poor decision making by the builders re parts substitutions, is that I find it ugly in some photos, not to mention there is no sense to it with regard to the other part of the bridge. Lots of clamour going on in the Bay area about the safety shortcomings. It's a vital bridge.

Laura A. Oda / Bay Area News Group/MCT
Morning commuters make their way across the new eastern half of the Bay Bridge in Oakland. Like many before me, I love the Golden Gate Bridge. One of my "hundred year old" aunt's brothers worked on it when it was being built. But that's not why I love it - I've always found it a joy to ride across, a beauty thrill, and I've crossed it a lot. On the other hand, I was never a commuter to the city. But I also didn't mind the Bay Bridge, despite the traffic jams to get on to it that I used to experience.

The Pacc and me at Crissy Field, Golden Gate in background. Damn, what a ladylike pose.

IT'S nearly 2,000 years old and for hundreds of years it shielded residents from invading barbarians.

So last November, when archaeologists unearthed the remains of a Roman wall in the heart of Winchester, plans for 14 new homes were put on ice to allow for excavation of the site.

Now it has emerged that the ancient piece of history could be smashed up and used as filler for the foundations of the new houses.

Or you can use the catwalk. Hikers raise $27,000 to support Bangor Area Homeless Shelter
http://bangordailynews.com/2013/04/14/news/bangor/hikers-raise-27000-to-support-bangor-area-homeless-shelter/
0 Replies
2
Reply Sat 15 Mar, 2014 08:30 pm
The Eads Bridge in St Louis, the Arch in the background. This is the bridge that made the West possible. This is the first place where the railroads crossed the Mississippi and made St Louis the gateway. 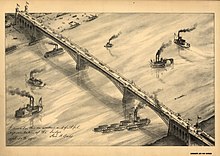 Did they run out of money after the foundation work?
0 Replies
1
Reply Sat 15 Mar, 2014 10:51 pm
Nada Tunnel in Nada, Kentucky--one of the nicest tunnels--the Nada Tunnel takes you out of the Red River into Nada. 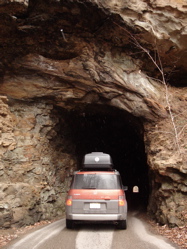