The Prudes over at the BBC

Forums: Media, Britain, Censorship, Journalism, Squeamishness
Email this Topic • Print this Page
2
Reply Fri 7 Feb, 2014 05:34 pm
BBC is a national broadcasting service, which means they broadcast in the public interest to everyone. That means children as well as adults. If they decide not to include language which parents may find offensive, they are making a wise decision in the public interest. Why should they give a rat's ass what a largely ignorant and poorly-informed, inept polemicist in the U.S. thinks? It's not bad journalism just because you don't get to see or hear the bad words. Idiot.
1 Reply
0
Reply Fri 7 Feb, 2014 05:50 pm
@Setanta,
"we cant practice good journalism because of the SAFETY! of the children"...

F bomb this and F bomb that!

my order roughly is:

All those and you're still pig ignorant about what's going on it the world.

You live in a country where you use bathroom to describe a room that has no bath in it just to avoid saying toilet or lavatory. You coined the word rooster to avoid saying cockerel, and heck instead of hell.

In the same way that flashbacks on British TV serials are not accompanied by the words 'previously on.....' because we can work it out for ourselves, we don't need offensive language spelled out for us.

You really should stop believing the complete bollocks spouted by BillRM, adults have no problems buying knives over here. There was some talk of banning knives that have no practical application other than injuring people. Knives like this. 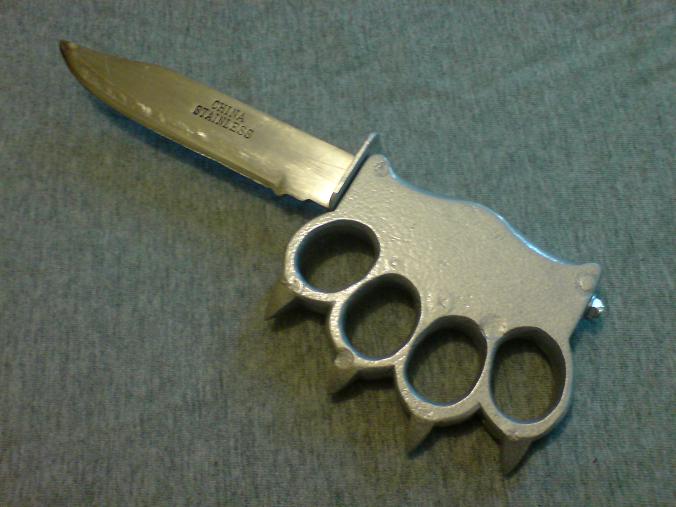 The BBC broadcast Frankie Boyle, too offensive for American tastes.

0 Replies
1
Reply Sat 8 Feb, 2014 04:12 am
@hawkeye10,
What's priceless is your idiocy. How is the quality of journalism lessened because someone doesn't use an obscenity that you happen to like? You are about the biggest phony-baloney "freedom hero" we've ever had here, and that's saying a lot.
0 Replies
2
Reply Sat 8 Feb, 2014 04:51 am
Let me remedy your profound ignorance just a little. BBC is a public service broadcaster which operates under a royal charter and a licensing agreement with the Home Office. It is the property of the people of the United Kingdom through their representative government. They pay hefty licensing fees on their televisions every year. It brings in more than three and a half billion pounds for the BBC every year. It is not only reasonable that the BBC cater to the wishes of the people of the UK, it would be scandalous if they did not.

CNN was founded by Ted Turner. It continues to be a privately owned corporation--Turner Broadcasting Sysem--which is owned by Time-Warner. CNN is responsible, though its corporate masters, to the stockholder.

I'll bet your apple pies really suck because you keep trying to make them with oranges.
1 Reply
1
Reply Sat 8 Feb, 2014 05:04 am
From the BBC's website

She says: "So that would be great, I think, to help glue this thing and have the UN help glue it and you know. [Expletive deleted] the EU."

She says: "So that would be great, I think, to help glue this thing and have the UN help glue it and you know. [Expletive deleted] the EU."

It's not difficult to work out what the expletive is. **** is the only one that makes sense. Hawkeye may need to have things spelled out for him, but most people aren't that stupid.
http://www.bbc.co.uk/news/world-europe-26080715


So in other words the brain trust over at BBC eventually figured out that they had failed to report the facts, and then edited the story. GREAT. However there is still the matter of getting it wrong to begin with.
1 Reply
2
Reply Sat 8 Feb, 2014 12:07 pm
@hawkeye10,
Or you couldn't work out what the swear word was for yourself and had to go somewhere else. I'm glad the BBC isn't dumbing down reports for people like you.
0 Replies
1
Reply Sun 9 Feb, 2014 08:13 am
@hawkeye10,
Speaking as a Brit (male) I find their whole approach to this stuff to be absolutely infantile - honestly, it embarrasses me to be a Brit at times. Yes they are prude - pathetic in fact. You should hear the gushing apologies on BBC radio if some guest accidentally utters the mildest of curses. The press is just the same - they produce all sorts of sexist crap and 'exclusives' with, for example, photos that some scumbag paparazzi has taken where a celeb has inadvertently shown her panties when getting out of a car. Yet when I was commenting about a sporting report on a feedback page (Daily Mirror), they censored the word 'crap'. Pathetic, infantile ... what else can I say?
0 Replies
1
Reply Wed 12 Feb, 2014 04:34 am
Quote:

The Beeb are publicly funded. In my opinion, and judging from what I read and listen to every day, the majority of the British public do not want to hear serious swearing at any old time of the day, especially when children could be watching and listening.
In the UK, the radio and television broadcasters have also signed up to an ageement that they do not broadcast adult material ( swearing included) before 9pm. This is known as the "Watershed".
Any swearing, nudity, serious violence or other adult themes broadcast before 9pm therefore brings the broadcasting Watchdog into play, and companies can receive serious fines for not taking enough care with material broadcast before this watershed.

Live broadcasts, such as the 'huck' interview, cause the programme editor major problems, as one never knows when a serious profanity will slip out, so therefore these programmes are usually broadcast with something like a ten second delay, which would give the editor just about time enough to blank the word out, or use some other averting tactic.

There are not many editors around the world who can lay claim to knowing every single bit of jargon regarding every new fangled sport to hit the scene, so therefore it is not really surprising to hear of an editor hearing the word huck for fhe very first time, and in the ten blood racing seconds from the utterance and its broadcast to millions around the world, he/she then has to make the decision as to :
a) Did he mishear it? Huck does not register, so therefore he MUST have misheard it,
b) If it wasn't huck, what was it? How many other words rhyme with huck?
c) If I let this through and I DID mishear it, it would probably be on the front pages tomorrow, so do I press the button to switch over to something else?

All this decision making is going on whilst the ten second slot is ticking away.

Tell me two things......
1. Had you ever heard of the huck word before that interview?
2. In the ten second slot, bearing in mind you could possibly be making a decision that broadcasts the eff word into family homes where very young children could be watching, and that possible progression in your career could take a hit, what would YOU do?

Please note. It is not just the Beeb who adhere to this watershed in the UK, it is the entire broadcasting industry within the UK.

Please note another point. Come 9.01pm, our mainstream television programmes (we're not talking cable weirdos here), are as explicit, or probably a damn sight more explicit than any mainstream US TV.

Effing and blinding, knobs and knockers, we've got the lot and usually in abundance. It's just that we don't want our young kids to be exposed to this stuff if it can be prevented at all.

What's wrong with that?

It's just that we don't want our young kids
to be exposed to this stuff if it can be prevented at all.

What's wrong with that?

With reference to juvenile AMERICANS,
I remember kids in school (maybe 11 on up) in NY
being more foul of mouth than typical adults.

All kids know most swear words from about the age of eight, I suppose. The difference is though, that if those words are used and heard all day every day, then they (kids) don't have a boundary set for them. It's all very well knowing the words, but it's a whole different thing knowing when it's acceptable to use them.

How many here, for instance, would have no hesitation saying "For f*** sake, do it this way, yo silly c***." to their Grandma?

If you answered "No way", it's basically because you were probably given boundaries as a child, which remain with you for life.

The 'watershed' is just another tool which helps parents reinforce those boundaries. All good, as far as I am concerned.

Mild and docile do not enter into things, unless one is out to try and denigrate someone else, or point score in some way.
Bait not taken.