What is a traditional Thanksgiving dinner service at home

From what I have ever known was all the food is put on the table and you serve yourself and pass around the dish. Is this traditional?

I assume if your table is NOT big enough you would have a table separate to serve yourself like a buffet style. And if you don't have room for a separate table you serve it up on plates and bring them to your guest sitting at the table.

Second traditionally on Thanksgiving you do NOT have appitizers. Is the correct?

I know you can do what ever you want, serve what ever etc. but I just want to know what is TRADITIONAL.

There is no basic consensus to this question on what's considered traditional.

I guess I should get opinions what people think is tradition but for example Turkey is a tradition of Thanksgiving. Even though my sister's family cooks duck.
1 Reply
1
Reply Fri 8 Nov, 2013 01:40 pm
@moderncat,
The celebrations that returned in style in the mid19th century didn't really realistically copy the meal provided in the so called original Pilgrims Thanksgiving.

Personally, I'm used to the New England style Thanksgiving dinners which to the best of my memory, never had appetizers.

I've had meals similar to this: 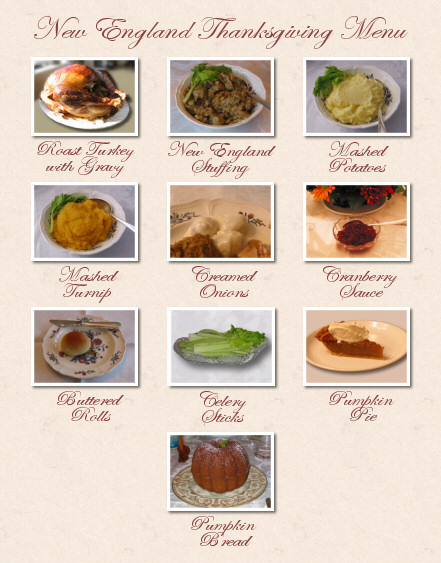 Though instead of pumpkin bread, we had brown bread. Throw in a carrots dish, a green bean casserole, and maybe another one or two vegetable side dishes.
1 Reply
1
Reply Fri 8 Nov, 2013 01:58 pm
@tsarstepan,
Interesting, your link states it wasn't until 1857,that turkey had become part of the traditional dinner in New England.

Has anyone been to a Thanksgiving dinner with appetizers? I don't remember, but I remember sneaking in the kitchen to help (snack on the food) then sneak out when satisfied.
2 Replies
1
Reply Fri 8 Nov, 2013 02:08 pm
@moderncat,
In the households I went to, shelled nuts and things like stuffed dates were placed out hours before the actual meal. So snacking was encouraged throughout the day before the dinner.
0 Replies
1
Reply Fri 8 Nov, 2013 02:31 pm
Traditional Thanksgiving Day dinner at our house is:

Stuffing...usually with giblets and roasted chestnuts.

We had the real stuff, right out of the can. None of that lumpy stuff in a bowl for us!


celery with cream cheese and radishes and green stuffed olives is what I remember for snacking beforehand....oh, and cold shrimp and cocktail sauce
1 Reply
1
Reply Fri 8 Nov, 2013 02:55 pm
@moderncat,
My family had a long wait before the meal, whatever house it was at, and there were drinks (sodas or liquor or iced tea) served by the man of the household, and dishes of peanuts and bowls of potato chips and sometimes good olives on the living room table or "the bar". Men also cooked, including in later years, the then grown sons. All three families were gender equal cooking teams.

We always had roast turkey with stuffing, mashed potatoes, turkey gravy, green beans, usually pearl onions, and cranberries, some good bakery bread, and plenty of butter. About an hour after dinner, we usually had three pies to choose from - pumpkin, apple, and some other chosen pie, plus vanilla ice cream if desired. The host family cooked one turkey, and one of the cousins families driving from afar would bring another cooked turkey, and other people were assigned to pie bringing or bread bringing.

When people came to my house they occasionally would come early so that we could all walk on the beach (which was about 15 blocks away) while the turkey was cooking. They would let us know that, of course. If no one was coming early, my husband and I walked the beach ourselves. So, every third Thanksgiving, walking the beach was part of the tradition.
If the cousins (and their mother) didn't come early for the beach walk, there was usually a neighborhood walk happening after the meal - not as big a deal as the beach was, but a way to get out and stretch legs.

On tables - in my house we worked up a set of tables in a row, thus moving the tables into the living room, and some living room chairs (etc.) into the dining room for the day. That was all done before anyone showed up.

My own mother, who was not alive for most of these memorable dinners, had mincemeat pie as a necessary choice. It took me a couple of years to figure out that my cousins and their families hated mincemeat pie. She happened to be born in Boston and lived there until she was around twenty, when that family moved to California, circa 1920. I don't think I've heard of mincemeat pie since then - I think it was more of an eastern U.S. thing.

I also forgot to add that the woman I call my hundred year old aunt, but was actually my cousins' mother, always brought her special wine for the meal. I can't remember the name right now, but I'll come back and post that when it pops up in my brain. It was in a kind of ceramic bottle and was rather sweet. Most of the younger generation of us adults despised it but were polite about it, sipping from small glasses.. After her death (she then really was over a hundred), the wine at the meal improved a great deal, but we all would rather have had her with us with her favorite as a table donation.

What about the cranberry sauce Frank?

Oh, yeah...I forgot about that.

I favor whole berry sauce...but I put out some of that other kind also. I use LOTS of cranberry sauce.
1 Reply
1
Reply Fri 8 Nov, 2013 03:00 pm
@Frank Apisa,
Funny thing, I always thought cranberry sauce was just for Thanksgiving or Christmas.

It was just a couple of years ago that I realized I can buy it any time of the year, and actually eat it!

Kiska and eggs for breakfast, and picked herring on rye bread for not breakfast.

and kapusta with dried lima beans, that would be at dinner too.