Do you write on-line reviews?

Do you write on-line reviews?

No, never, but upon arrival I always tell the restaurant manager that I will be writing one.
0 Replies
1
Reply Mon 14 Oct, 2013 05:16 am
@Linkat,
I always like to write online reviews whether its positive or negative... But I wont write for everything.. I will write only when my product is branded or when i shop from reputed retailers .. Because generally people will have belief on top brand products only.. So I hope my reviews will help the other buyers to know the quality and other things.
1 Reply
0
Reply Mon 14 Oct, 2013 09:59 am
@billie-jean,
Of course, you realize that the rules of A2K are there's no plugging or spamming allowed, right?
0 Replies
1
Reply Wed 15 Mar, 2017 01:59 pm
I've only written 5 or so restaurant reviews on Yelp. Three official movie reviews on IMDb. Maybe a dozen product reviews on Amazon.

But I do skim over/peruse the Amazon and Yelp reviews and take them with a grain of salt....

0 Replies
1
Reply Wed 15 Mar, 2017 02:37 pm
@johnats,
That's about the way I do. If it's horrible, I let people know: if it's just kind of okay, it doesn't seem worth the bother. I do worry about a couple of 5 star reviews but only from a small hand full of reviewers.
0 Replies
1
Reply Wed 15 Mar, 2017 03:11 pm
I am not much for writing reviews and I never read them as I might not have the same taste as another person.
Now I have!!
I stayed overnight in a not very expensive hotel. Nice big room and bathroom.
Next night in a hotel much more expensive. Room rather small and one of these hotels where the room is designed by some fancy architect. No door to the bathroom!!! The full length mirror was not on the closet door, but across the shower! You could watch yourself shower in a blast of light.
Glad I was on my own.
I must admit I did critizice the hotel for this idea.

In my trips to Italy, I had many hotel experiences. starting with the very first one, a one star hotel in, I think, an 80's Fromers book, a hotel I picked since it had a garden. It was great for a lot of reasons, and remains my favorite hotel ever. I've certainly raved about it on a2k. It has more than one star now, smiles, but last time in Rome, I stayed there again, despite the money I blew to do it.
Nothing was odd except that Luigi wasn't there anymore. He was the guy who manned the desk and orchestrated our getting some wine, etc. This was near the FAO building, so people that gathered in the small lobby were interesting.

On the other hand I've faced oddities in other 1 star alberghi.
I remember a bathroom shower I could hardly maneuver in, so small, also in Roma... and I'm not large.
I remember stubbing my toes on marble (that hurts) to get into a shower.

More oddities to follow.
1 Reply
2
Reply Thu 16 Mar, 2017 07:38 am
@ossobucotemp,
I could write a book about the odd places I stayed when I was younger - I like to travel light and cheap when I was in my twenties.

I remember one place - stayed in Bath, England - it was a sweet older lady running the place. She had pictures of the queen and everything - just everything was decorated in roses -- rose wallpaper, rose curtains, rose bedspreads. And they didn't match.

When going down to breakfast - she greeted us nicely, and then she started on a rant about a man that just left it was over the top because he didn't finish his breakfast and what a waste and so forth. Though she was tiny she scared the beegeezes out of us - we ate everything.
0 Replies
3
Reply Thu 16 Mar, 2017 07:39 am
I write reviews because independent authors depend on them for sales. Even bad reviews can drive sales.
1 Reply
1
Reply Thu 16 Mar, 2017 07:56 am
@jespah,
I read an article about those reviews and there are also professionals writing positve reviews and also negative about rival hotels.

There are also indie writers like me who are just trying to make a living and no, I don't sell reviews. I think it's abhorrent. I don't know anyone in the independent writing community who does although I imagine someone out there does. However, the hundreds of people who I have met who are trying to make it as a writer are not like that.
1 Reply
5
Reply Thu 16 Mar, 2017 08:07 am
i write all my reviews, even those self evaluating job performance things, on pieces of ribbon, i then go out in the woods and tie the ribbons to branches, over time the ribbon deteriorates or birds use them for nests, and in this way my reviews become one with the fabric of the universe
0 Replies
2
Reply Thu 16 Mar, 2017 08:14 am
@jespah,
I have never heard about anybody writing bad/good reviews about books for money.
I am talking about hotels.
I only write something if I can say something positive. If I am against something I would tell the hotel it directly when I am there.
1 Reply
1
Reply Thu 16 Mar, 2017 08:51 am
@saab,
saab wrote:

I have never heard about anybody writing bad/good reviews about books for money.
I am talking about hotels.
I only write something if I can say something positive. If I am against something I would tell the hotel it directly when I am there.


I'd take the job that pays me to write bad reviews for books, hotels, whatever. That would be super easy. Especially if one doesn't have to read the book, stay in the hotel, etc....
1 Reply
1
Reply Thu 16 Mar, 2017 11:36 am
@tsarstepan,
Dropping this relevant pic here: 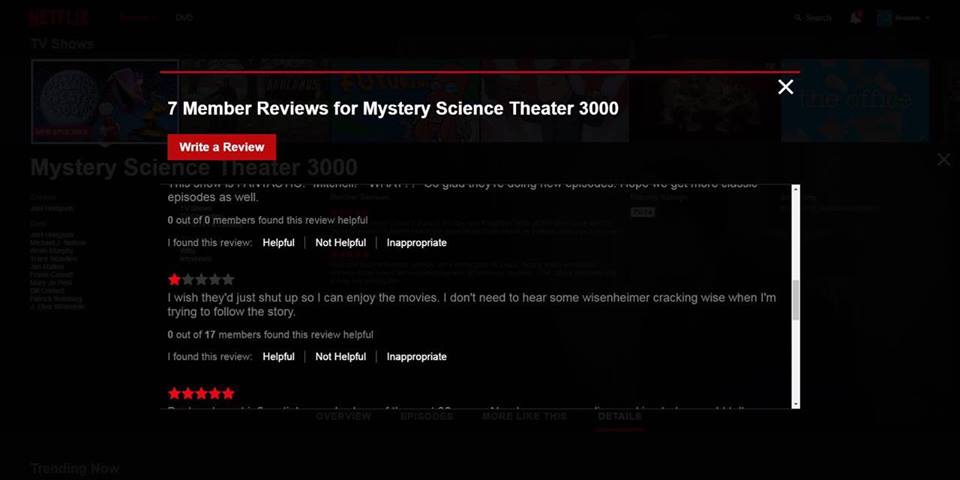 0 Replies
1
Reply Mon 20 Mar, 2017 12:54 pm
Found this website that rates ratings - fakespot.com - if you have an amazon or yelp review - you paste in the link and it does an analysis based on those who have reviewed it ad gives a rating about whether the ratings are fake or not.

Interesting.
0 Replies
-1
Reply Thu 8 Jun, 2017 04:57 am
@Linkat,
yes, I always write reviews. I believe it helps other people when they search for hotel or some produc
0 Replies