Forums: Gaelic, Other Languages, Language Help, English To Gaelic Translation
Email this Topic • Print this Page
Reply Sat 23 Feb, 2013 07:23 am
How do you say beautiful witch in Gaelic?

Is Irish the same as Gaelic? Plus I do realize each word has its connotations both positive and negative. I'm looking for a friendly greeting for a Wiccan friend to that point.
Type: Question • Score: 2 • Views: 1,925 • Replies: 4
No top replies
1
Reply Sat 23 Feb, 2013 08:55 am
@tsarstepan,
There are several gaelic dialects, irish is one of them.
This would be my guess Cailleach Álainn.
1 Reply
1
Reply Sat 23 Feb, 2013 09:02 am
@Ceili,
Or Bana-buidseach àllainn..
0 Replies
2
Reply Sat 23 Feb, 2013 09:06 am
@tsarstepan,
There are three Goidelic languages--Erse, or Irish Gaelic, Scots Gaelic and Manx. Manx is, effectively, a dead language which is being revived, although not very successfully. Erse is still widely spoken in Ireland as the first language of a small language community, almost exclusively in the west of Ireland. Irish Gaelic is also taught in the schools, but it is not used as the day-to-day language outside the Gaeltacht--which means the areas in which Gaelic is the first language of the inhabitants. (By the way, the Irish don't say Erse or Irish Gaelic, they just say Gaelic.)

This map is a mostly reasonable chart of where Gaelic is spoken by the population: 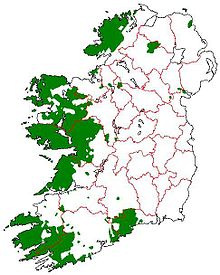 All the Gaelic languages descend from Old Irish. About 2500 years ago, the Irish invaded and colonized south central Scotland. To the Albans and Picts who already lived there, the were the na'Scota--the sons of Scota, the legendary "mother" of the Milesian invasion of Ireland about 3000 to 3500 years ago. The Romans called them the Scotii, which is where the names Scotland and Scot come from (something else which will infuriate the Scots if you mention it to them).

So, you will need to decide which of the two dialects you want the translation from, and then i would advise finding and posting in either an Irish or a Scots heritage web site. Witch is not likely to come in a form which expresses approbation. Even before the Christians arrived, both the Irish in Ireland and the Irish in Scotland believed in witches, and feared and disliked them. The great Irish mythic hero, Cu Chulainn (pronounced "Koo Kullen" by the modern Irish, no matter what the academics say) when he was still just a boy named Setanta, was reputed to have learned the use of weapons from a Scots witch. They may have feared and respected witches, but they didn't like them.

By the way, although they are often treated as two different languages, fisherman from the north of Ireland and from the western islands of Scotland can understand one another's speech, so i think dialect is a more accurate term.
0 Replies
1
Reply Sat 23 Feb, 2013 10:31 am
Scots gaelic is also spoken on the east coast of Canada, mostly in Cape Breton, Nova Scotia.
0 Replies