He Did It! Felix Baumgartner's Recordbreaking Skydive From Space

Austrian Felix Baumgartner has broken the record for the highest ever skydive by jumping out of a balloon 128,000ft (24 miles, 39km) above New Mexico.

The 43-year-old was hoping also to break the sound barrier during his descent - although that mark awaits confirmation.

Video cameras relayed the moment Baumgartner stepped from his balloon capsule to begin his fall to Earth.

It took just under 10 minutes for him to reach the desert surface below.

Only the last few thousand feet were negotiated by parachute. Once down, he fell to his knees and raised his fists in triumph. Helicopter recovery teams were on hand moments later.

More at the link above.

You can also follow it minute by minute and see photos here: 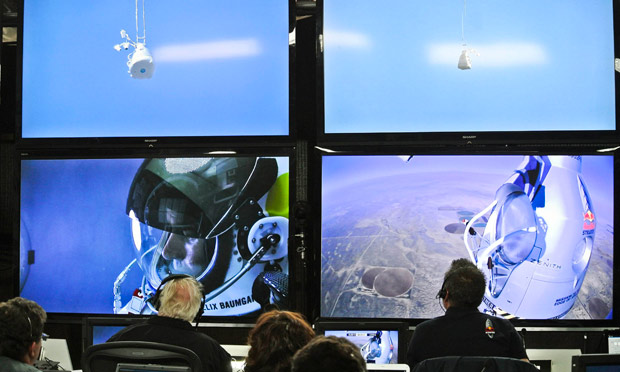 The space jump in summary:

Felix Baumgartner has skydived to earth from 128,000ft, that’s about 24 miles, and the highest anyone has ever gone in a balloon.

The jump broke another record too
More than 7.1 million people turned to YouTube for updates.

The press conference has begun
The preliminary numbers are now in. The big one is speed. Baumgartner reached Mach 1.24, meaning he did break the speed barrier.

Baumgartner was in freefall for four minutes and twenty seconds.

Amazing.... imagine if the astronauts aboard the shuttle that broke up over New Mexico a few years ago had had this equipment and technology.


The shuttle was moving at the time at a speed that melted holes in the unprotected metal of the ship so the technology used in this jump would not had save them in any manner not to even mention the G forces on the crew as the ship broke up and the crew was then ejected from the craft.
1 Reply
0
Reply Sun 14 Oct, 2012 06:03 pm
@BillRM,
Footnote two crew members of a blackbird did survive the break-up of their aircraft at mach 3 somehow in the 1960s however the shuttle was flying a hell of a lot faster then mach 3 at the time of it breakup and the report I look at claimed that the deceleration forces kill the crew members if my memory is correct.
0 Replies
2
Reply Mon 15 Oct, 2012 11:47 am
@Butrflynet,
Butrflynet wrote:

Amazing.... imagine if the astronauts aboard the shuttle that broke up over New Mexico a few years ago had had this equipment and technology.


From what I know, Space Shuttle Columbia broke up over Texas, Louisiana and Arkansas.

A major difference between this jump and the Shuttle disaster is that Baumgartner didn't leave the atmosphere. He was a few miles away from the edge of the stratosphere. The Space Shuttle had left the earth's atmosphere and was reentering it. Enormous heat is generated upon reentry of the earth's atmosphere. The shuttle disintegrated upon reentry because it's thermal protection system was fatally compromised.
1 Reply
0
Reply Mon 15 Oct, 2012 12:53 pm
@InfraBlue,
To say nothing of the g forces on the crew when the ship lost it streamlining as it broke apart and decelerated at what a hundred G or more?

With all kind of rotational forces acting on the shuttle parts and the crews.

Heat and G forces would not allow the technology of the balloon bailout to work you would need some serious engineering to turn the crew section into some from of a lifeboat/capsule that would give the crew a chance and god know how heavy such a structure would be.
0 Replies
2
Reply Mon 15 Oct, 2012 03:35 pm
@Butrflynet,
Very, very cool to watch. Thanks so much for posting.
0 Replies
1
Reply Mon 15 Oct, 2012 11:14 pm
http://www.kvue.com/news/174299961.html

Felix Baumgartner survived his record breaking leap from 24 miles above Earth on Sunday thanks in part to a special pressurized suit that experts say could help save the lives of future astronauts—except NASA is not interested.

Baumgartner leapt from 128,000 feet, falling through the near vacuum at speeds exceeding 800 miles an hour.

"He is a brave man, clearly, to have done what he has done. But this project is anything but a daredevil act," said Dr. Leroy Chiao.
Chiao is a a former NASA Astronaut who flew on three shuttle missions, the Soyuz Rocket and commanded the International Space Station.

Now, Dr. Chiao works with the Baylor College of Medicine Center for Space Medicine where some of the testing was done on the high tech suit worn in the jump. So does Dr. Jon Clark, who lost his wife Laurel when the Space Shuttle Columbia broke up over Texas in 2003.

All along the team has said this is not a stunt. It is research on the pressurized suit, something that could help protect our astronauts in the future.

In space talk they call them Black Zones, places astronauts don’t want to see "Simply, our systems will not probably allow you to survive. The idea is to minimize or eliminate those black zones," said Chiao.

Since Sunday, 128,000 feet and down is off the list.
"That’s a big step. The suit is certainly part of that survival process," said Chiao.

NASA says that the suit is not in its future plans. A spokesperson said it doesn’t see any need for it.

But that doesn’t mean that the new suit doesn’t have a future in space. NASA is not the only place that needs suits.

"You have the new commercial space companies and they are going to need suits," said Chiao.

Daredevil Felix Baumgartner's record-breaking jump raises hopes that pilots and even astronauts can be saved from accidents in the stratosphere, experts said on Monday.

Bernard Comet of France's Institute of Space Medicine and Physiology (MEDES) said: "It proves at the very least that one can eject at extreme altitude, although this is something that hasn't been done before."

Both Viso and Comet stressed that the technical and training challenges were major.

In contrast with Baumgartner, who leapt from a balloon, a pilot who ejected would be exposed to an extreme shock from acceleration, said Comet. As in Baumgartner's descent, there would be the challenge of preventing a spin, which could cause a blackout.

"It increases the window of opportunity for saving astronauts," Viso said.

It could in theory be used in the classic rocket-and-capsule system if a problem occurs at high altitude during the launch phase, he said.

But ejecting upon re-entry, when a spacecraft is flying at supersonic speed and battling atmospheric friction, would be impossible, Viso said.

"If you re-enter at seven kilometres per second (15,600 miles per hour) in a pressure suit, you will burn up, and so will your suit," he said.

In the early years of human spaceflight, the Soviet Union's Vostok system had an ejector seat, designed for launch abort on the ground and for recovery of the one-man crew at the end of the mission.

The US Gemini system also had an ejection system in the event of a launchpad accident.

Other rocket-and-capsule systems, such as the Russian-Soviet Soyuz, the former Apollo moon missions, China's Shenzhou and NASA's planned Orion, have an abort mechanism, comprising solid rocket boosters mounted on top of the crew capsule.

They are designed to haul the capsule to a safe parachute height while the rocket is on the ground or in early launch phase. It separates and falls to earth, to save weight, when the air thins.

Baumgartner's medical director, Jonathan Clark, lost his wife, Laurel, in the US space shuttle Columbia, which tore apart on February 1 2003 as it re-entered the atmosphere.

The US space shuttle was fitted with a crew evacuation system after the 1986 Challenger disaster.

It could be used during return phase but not during launch phase. Even so, it could not have helped the Columbia crew.

Astronauts could bail out from a side hatch after donning parachutes, but only provided the shuttle was on a stable glide at a height of 20,000 feet (6,150 metres) or less.