South Africa's Oscar Pistorius and fellow athletes walk off the track following a men's 400-meter heat during the athletics in the Olympic Stadium at the 2012 Summer Olympics, London, Saturday, Aug. 4, 2012.

LONDON -- There are times when history only becomes clear with hindsight and others – rarer, more goose-bumpy – when you actually feel it being made. Oscar Pistorius revolutionizing our notions of what is possible with every clink, clink of his prosthetic legs on the London Olympic running track was one such moment.

A double-amputee, tearing down the finish straight on carbon-fiber blades. You almost had to rub your eyes to believe it. Then again, Pistorius' gift to us all is that he has made this seem not at all strange. By running 400 meters in 45.44 seconds, Pistorius showed how absurd it is to think of him as "disabled."

He's different to many of us. But with one lap of the track, he showed that is not because his legs stop just below the knees. Rather, with the 13th fastest time in a field of 49 sprinters from 39 countries, he proved he's an exceptional athlete. Exceptional not because he runs on blades. Just exceptional, full stop.

"That's going to be his legacy," said Anthony Stone, who has multiple sclerosis and, from his wheelchair 25 rows up in the stands, watched Pistorius become the first double-amputee Olympian.

"It's all about changing attitudes, and he's pushing the envelope to make people reconsider what disability is," the 50-year-old Londoner said. "He's a fantastic athlete. That's what you see."

The four other runners in Pistorius' race all had calf muscles, ankles and feet below the knees. Only he strode into Olympic Stadium on curved black blades. They made a metallic clank on the track when he knelt down to adjust his starting blocks in lane six. To hear that felt unusual.

Only he wore white socks over his stumps. They poked out from the top of his prosthetic legs. He tugged on them, getting comfortable. Only he drew a roar from the crowd when he launched himself out of the blocks, practicing his start. Someone shouted "Oscar!" and waved a South African flag. He looked up briefly and smiled. Later, with a laugh, Pistorius said he also "heard some guy shout at me, 'Oh, you sexy beauty!'

There was no pretending this was just an Olympic preliminary heat like any other. And Pistorius didn't pretend that it was. A roving television cameraman made a beeline for him, zooming in on him first. Pistorius responded with a thumbs-up and a captain's salute. The stadium announcer spoke his name as though this was a boxing bout in Las Vegas: "Oscar" – pause – "Pistoooorius." At that moment, every eye in the 80,000-seat arena must have been on him.

Somewhere in the giant bowl of people were Pistorius' 89-year-old grandmother, Omau; his brother, Carl, and his sister, Aimee. She sent a text message – "Daddy, at the stadium, it's awesome" – to their father, Henk. He watched the race in a Johannesburg restaurant with the surgeon, Gerald Versfeld, who amputated Pistorius' lower legs when he was 11 months old, because he was born without fibulas, the slender bones that run from below the knee to the ankle.

In the stadium, the giant screens flashed images of other pioneering sprinters, among them Jesse Owens, the Alabama sharecropper's son who ridiculed Adolf Hitler with his four gold medals in Berlin in 1936, and Cathy Freeman, the Aborigine who made Australia proud and think long and hard about itself with her 400 gold at the 2000 Sydney Games. Still, it wasn't clear at that point, before he had run, whether Pistorius really deserved to be in their company. But 400 meters and 45 seconds later, it would be.

He settled into the blocks, the curve of his blades hard up against them, waiting for the starter's gun.

And, with that, Pistorius the history-maker and, to an extent, the curiosity, became simply Pistorius the athlete. Instantly, it was his running, not his blades, that seemed important.

His start was sluggish and labored, as it always is without the springy explosiveness that lower legs provide, but it wasn't as slow as some previous races I've seen him run. Luguelin Santos, the eventual heat-winner from the Dominican Republic, running in the lane to Pistorius' right, burst out of his crouch and quickly opened the gap ahead of the South African. Pistorius starts more upright and then accelerates.

Once up to speed, Pistorius was impressive, the way he clawed back closer to Santos, his blades slapping down on the track, eating up the meters. He placed second, so comfortable he was able to ease up over the last 20 meters.

He fulfilled two goals. One was to reach the semifinals on Sunday – the gala track night where he will be overshadowed by the men's 100-meter final expected to star Usain Bolt and Yohan Blake. The other, stated in Pistorius' biography, to be "simply an athlete and a sprinter."

It took close to an hour for Pistorius to slowly navigate his way through the maze of television interviewers from around the world who wanted a piece of this history, to know how he felt – "I didn't know if I should cry or be happy," he told the BBC, "it was such a mix of emotions."

His prosthetic legs now covered by white track pants and wearing sneakers, he then bounded down a set of stairs into the teeming anthill of journalists and thanked them for waiting.

He said he had been thinking a lot on this special day about his mother, Sheila. He has the dates of her birth and her death – March 6, 2002 – on his arm.

Five months before his amputation, she wrote a letter for him to read as an adult.

"She didn't take 'No' for an answer," Pistorius said. "It's definitely her sprit that has helped me to be here today."

Then, a few questions later, he was gone. Off to eat, to rest and to recover for his next race.

A conscientious Olympian like all the others, an athlete above all.

Believe it or not there are many people/athletes that feel his prosthetics give him an unfair advantage.
0 Replies
2
Reply Mon 6 Aug, 2012 11:09 am 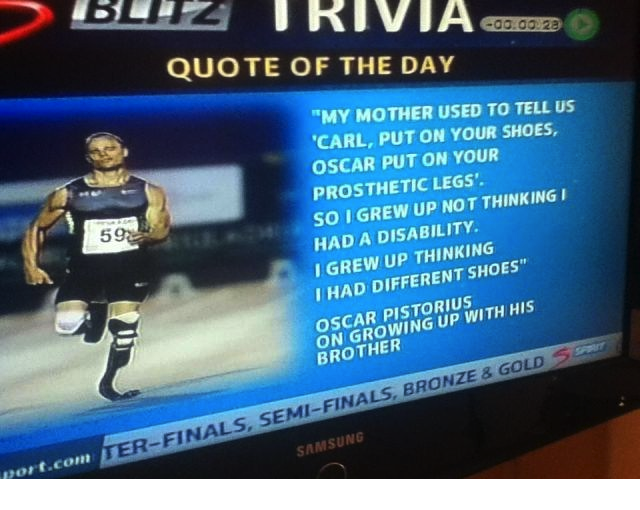