The Worst Hard Time: The Untold Story of Those Who Survived the Great American Dust Bowl

The dust storms that terrorized the High Plains in the darkest years of the Depression were like nothing ever seen before or since.
Timothy Egan’s critically acclaimed account rescues this iconic chapter of American history from the shadows in a tour de force of historical reportage. Following a dozen families and their communities through the rise and fall of the region, Egan tells of their desperate attempts to carry on through blinding black dust blizzards, crop failure, and the death of loved ones. Brilliantly capturing the terrifying drama of catastrophe, Egan does equal justice to the human characters who become his heroes, “the stoic, long-suffering men and women whose lives he opens up with urgency and respect” (New York Times).

In an era that promises ever-greater natural disasters, The Worst Hard Time is “arguably the best nonfiction book yet” (Austin Statesman Journal) on the greatest environmental disaster ever to be visited upon our land and a powerful cautionary tale about the dangers of trifling with nature.

Starred Review. Egan tells an extraordinary tale in this visceral account of how America's great, grassy plains turned to dust, and how the ferocious plains winds stirred up an endless series of "black blizzards" that were like a biblical plague: "Dust clouds boiled up, ten thousand feet or more in the sky, and rolled like moving mountains" in what became known as the Dust Bowl. But the plague was man-made, as Egan shows: the plains weren't suited to farming, and plowing up the grass to plant wheat, along with a confluence of economic disaster—the Depression—and natural disaster—eight years of drought—resulted in an ecological and human catastrophe that Egan details with stunning specificity. He grounds his tale in portraits of the people who settled the plains: hardy Americans and immigrants desperate for a piece of land to call their own and lured by the lies of promoters who said the ground was arable. Egan's interviews with survivors produce tales of courage and suffering: Hazel Lucas, for instance, dared to give birth in the midst of the blight only to see her baby die of "dust pneumonia" when her lungs clogged with the airborne dirt. With characters who seem to have sprung from a novel by Sinclair Lewis or Steinbeck, and Egan's powerful writing, this account will long remain in readers' minds. (Dec. 14)
Copyright © Reed Business Information, a division of Reed Elsevier Inc. All rights reserved. --This text refers to the Hardcover edition.
From The New Yorker

On April 14, 1935, the biggest dust storm on record descended over five states, from the Dakotas to Amarillo, Texas. People standing a few feet apart could not see each other; if they touched, they risked being knocked over by the static electricity that the dust created in the air. The Dust Bowl was the product of reckless, market-driven farming that had so abused the land that, when dry weather came, the wind lifted up millions of acres of topsoil and whipped it around in "black blizzards," which blew as far east as New York. This ecological disaster rapidly disfigured whole communities. Egan's portraits of the families who stayed behind are sobering and far less familiar than those of the "exodusters" who staggered out of the High Plains. He tells of towns depopulated to this day, a mother who watched her baby die of "dust pneumonia," and farmers who gathered tumbleweed as food for their cattle and, eventually, for their children.
Copyright © 2006 The New Yorker

More About the Author
Biography

TIMOTHY EGAN is a Pulitzer Prize-winning reporter and the author of five books, most recently The Worst Hard Time, which won a National Book Award for nonfiction and was named a New York Times Editors' Choice, a New York Times Notable Book, a Washington State Book Award winner, and a Book Sense Book of the Year Honor Book. He writes a weekly column, "Outposts," for the New York Times.

One woman told me that it wasn't the dust in the fields and yards which got to her, it was the dust inside the house. No matter how tightly you sealed the windows and doors, every plate had to be rinsed off before you could eat off of it and when you headed for bed, you had to shake the dust off of the covers before you tucked yourself in.

I told her my grandmother used to say "You have to eat a peck of dirt before you die." "Oh, honey, " she replied, " If that were true, we'da all been dead two weeks after the first storm."

Joe(we have no idea what struggle is)Nation
0 Replies
1
Reply Sun 11 Mar, 2012 07:22 pm
There exists lots of footage of the Dustbowl on youtube.

1 Reply
1
Reply Sun 11 Mar, 2012 07:48 pm
I read this book when it first came out and even after I finished it I was confused as to why people stayed. It was miserable, yet only a few 100 miles away there was clean air and water. It wasn't a matter of money, everyone was poor, but it seemed like there were two types of people who hung on - those too stubborn to admit defeat and those who seemed to have a passive wish to suffer and even die on their sand covered land. At least the Joad's of the area tried to find a better life.
1 Reply
1
Reply Sun 11 Mar, 2012 07:54 pm
@edgarblythe,
gram can tell some pretty hairy stories about Wichita during the dust bowl.

it was a hard hard time...
1 Reply
1
Reply Sun 11 Mar, 2012 08:00 pm
@Rockhead,
My mother's family went to California, but was not allowed in. The authorities stopped them at the border. Too many broke families were coming in. But they made a go of it in Oklahoma and Texas.
1 Reply
1
Reply Sun 11 Mar, 2012 08:06 pm
@edgarblythe,
part of my grandfather's family went to california. settled near Anaheim.

His descriptions of life at the time & Walker Evans' photographs have lingered in my memory. Very Moving. What terrible, tough times these people endured! 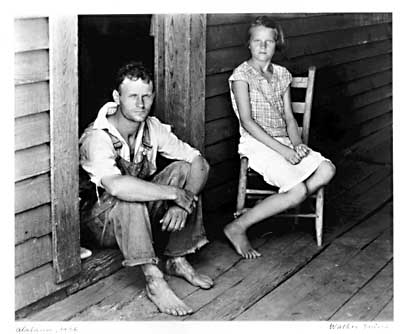 Let us Now Praise Famous Men:
http://en.wikipedia.org/wiki/Let_Us_Now_Praise_Famous_Men
0 Replies
1
Reply Mon 12 Mar, 2012 07:57 am
@Green Witch,
It wasn't like there were any reliable sources of information about where people should go (except for Calle-forn-eye-yeh shout).
Nobody wanted to "get out of the frying pan and into the fire."
Who says if you left Drumright for Owasso, you'd be any better?
And, just like now, people owed the bank for the farm that was blowing away in the wind.
It was all they owned. They, some of them, didn't have much left to pawn or sell, if they could find anyone nearby who had any money to part with to buy what they were offering.
My dad told me about families who first took all the corn they hadn't sold and made cornmeal. Took some money and bought beans. They lived on cornbread and beans for a year. They knew they were in bad trouble when the cornmeal was gone, the beans were gone, the chickens HAH, they were long gone....and they started in to eat their seedcorn. Without seedcorn, you had no crop, with no crop,you had nothing to sell or eat.
There were people who chopped up newspaper to add to cornmeal mush to make it stretch.
My dad's family wasn't so bad off, but they were bad off. My father never ate my mother's cornbread because he said "I had plenty enough of that on my plate to last me forever."

Pop told me his brothers killed every squirrel, dove, duck, partridge, turtle, crayfish and possum off of their farm and two farms over.