Someone better warn Ceili and BiPolarBear!

Forums: Music
Email this Topic • Print this Page
Reply Sat 31 Jan, 2004 01:07 am
Those two seem to think they're the only entertainers on this site. I got a little sick of all their bragging about fame, glory, groupies, sex, drugs, the whole bit.

I sat down and fumed for awhile and then said to myself, "Hell, Gus, you got more talent than those two. Don't just sit here and mope -- get the boys together and go on tour."

So I called up my cousin, Joe Birdidnick; Cletus, from the feedmill; Charlie Pidarkski (Gertrude's son) ; and Ralph, from the hardware store.

We haven't played together for quite some time, but we practiced tonight and, damn, I still have it!

I got out my trademark red suspenders and started belting out those tunes like there was no tomorrow.

Matilda and Gertrude were in the audience and you should have seen those two ol' gals perspiring as they watched my bump and grind routine. Heh, heh... I thought they were going to faint.

So lookout, Bear and Ceili. There's a new band in town.

Nah, Dlowan, those stage lights can play tricks on the eyes.

That's not an IV bottle hanging in the background, is it?

Why yes it is, Roger. I got the idea after watching the last Rolling Stones concert.

Did you get shorter too Gus?

You're wrong, Montana. The guys around me are all over seven feet in height. My cousin, Joe Birdidnik, is 7'2".
0 Replies
1
Reply Sat 31 Jan, 2004 05:42 am
Gus- Those red suspenders! Did you pinch them from Bi? They look awfully familiar. Seems to me that Bi was wearing those when he played Santa at the big Christmas bash!

0 Replies
1
Reply Sat 31 Jan, 2004 06:04 am
Actually, Phoenix, red suspenders are quite popular with us lead singers. Besides me and the Bear, there are many singers who wear the red suspenders -- James Brown, Willie Nelson, Ian Anderson, Whitney Houston, Eminem, and the Andrews Sisters, to name a few. 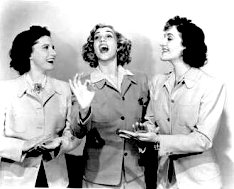 You know, the one in the middle looks a bit like Ceili, and the one on the left bears a striking resemblance to BiPolarBear.

Years ago Ceili was singing on a stage in Laredo, Texas. One of the cowboys in the crowd asked her for an autograph and she laughed and said, "Get outta here cowboy... you're bothering me."

All the cowboy's friends laughed at him and he skulked away, a bitter and defeated man. He returned later with a bottle of acid and threw it at Ceili's face. She whirled around, trying to avoid the lethal fluid, but it caught her full on the left side of her face. It was horrible. That side of her face literally melted as horrified onlookers gasped. Some of the womenfolk fainted.

Ceili went to some of the best plastic surgeons in the land, but the damage was too severe. They did what they could.

There's horror behind that mask, Wilso. Horror and hideousness like you couldn't possibly imagine! And you call her cute. You're ripping her soul out, you heartless bastard. Hasn't she suffered enough?

What's the name of your hot little band and what song did you sing to get those ladies all riled up?

The name of our band is "Mas Tarde". The song I was singing that caused the ladies to swoon was Aint my bitch, our rendition of the very popular Metallica song. If you look closely at the photograph you'll see that I'm singing the word "hell", at the precise moment the picture was taken. That was from this verse....

That was also the precise moment the ladies began to sweat in earnest.

0 Replies
1
Reply Sun 1 Feb, 2004 12:10 am
Garsh, Gus......I had no idea my incesant bragging/boasting bothered you. I'll try to be a bit more humble, more modest around you.
You might be interested to know, I was in the crowd that night, I was the first to swoon. Because of my terrible facial wounds, I was hiding in a dark corner, just behind Clarence Speigleman's grocery cart. It was piled high with all the usual stuff, bottles and sleeping bags, a single rubber boot and his impressive toothpick collection... ect.
A really tall man, who had recently left the stage caught me, unfortunatly I couldn't see his face, he caught me on my blind side. So if you could ask around perhaps you could thank this fellow for his kindness and pass on his name to me. As I would love to send him some of my saskatoon berry preserve. It's wonderful over vanilla icecream.
BTW, I know competition when I see it and now realize my career under the bright lights will soon fade. I couldn't be happier passing the torch to such a talented group of fellas.
Your groups rendition of "Ain't My Bitch" brought a tear to my good eye.
Wilso, regardless of my present condition, I appreciate your kind words. I have had several years of intensive mental therapy and have recently began to venture out beyond the confines of local stages.
Ceili
0 Replies
1
Reply Sun 1 Feb, 2004 05:37 pm
Not to sound cocky or conceited, but I'm the greatest entertainer on the face of the Earth, with the exception of Jack Black. Don't believe me? Come talk to me after I win my school's talent show in a few weeks. My plan is to get up there, and demean the entire audience. Question their intelligence, call them ugly etc.. You may be saying "Don't do it, that's suicide!". Love me, hate me, you are gonna respect my honesty, or hate my cockiness. Now you may be wondering, what are you good at? haha, good question my friend, good question....I play guitar, sing, and dance. Also I can act, and I'm easy on the eyes. My only artistic weakness, would be my drawing skills.

But I am really not cocky, just confident. I know there will be those people at the talent show saying "hey, do you think you are better than me?" and I'll answer "I am better looking, better at rocking out, and better at entertaining, so yes". But don't worry brethren, I'm 6'3 200 pounds, so I could bust some heads if necessary.

0 Replies
1
Reply Mon 2 Feb, 2004 02:28 am
Gustav, this is precisely why the Congress should act to stop first cousins from marrying and if they do, restricting their access to musical instruments and amplifying equipment. I will also be seeking a rider to such legislation with the intent to ban you from unsupervised access to the electronic medium known as the 'Internet".
0 Replies
1
Reply Mon 2 Feb, 2004 06:44 pm
Mr Stillwater wrote:

Gustav, this is precisely why the Congress should act to stop first cousins from marrying and if they do, restricting their access to musical instruments and amplifying equipment. I will also be seeking a rider to such legislation with the intent to ban you from unsupervised access to the electronic medium known as the 'Internet".

neither cool or funny.