THE EXCELLENCE OF BOOKS

Forums: Books, Audiobooks, Ebooks, Paperbacks, Hardcovers
Email this Topic • Print this Page
Reply Fri 17 Dec, 2010 06:52 am
A passage of discussion in another thread lead me to reflect once again on my preference for books. This is not to deny the excellence of texts stored on your box, or on CDs or available online. But i would choose a book over a monitor on any occasion where the choice were available to me. I have a visual memory, i remember things based on images i remember. If i want to find a passage in a book, i remember, roughly where in the book it can be found (that's not a reference to page numbers, though--i can't seem to remember those very well). I visually remember whether it's on the right or the left hand page, and whether it's near the top, the middle or the bottom of the page. I can flip a hundred pages over in a book much faster than anyone could scroll to the place in the text, or even arrive there by page up or page down commands. Other people's memories, can, of course, be structured much differently, but the way mine works, i much prefer to use a book when possible.

If you want to refer to a map or an illustration, i find that much easier by holding the place with my finger, and flipping back an forth. Perhaps i'm just clumsy, but i find that works better than switching between open windows on a monitor.

Then, as well, there is the nostalgic associations i have with books. I like the feel of a book in my hand, i like sometimes to just leaf randomly thorugh the pages. In books such as dictionaries or encyclopedias, you can while away hours just leafting through them, and you might even forget what you were looking for, and still enjoy your experience.

I find that I am reading and enjoying the experience more than when I had to deal with a hard cover or paper back book. I have the kindle in a leather cover, and when I cross my legs, it lays open nicely, so that I only have to touch it to turn the page. I know that there is a way to make notes, but I have not tried that function yet.

One of the places where I really enjoy my new gadget is waiting in a doctor's office. I just pick out something that I want to read, a choice of many, and become involved in the "book". Interestingly, it was a standing joke with Mr. P. that in some doctors' offices you could read "War and Peace" before you were called. So I downloaded "War and Peace", just for the hell of it.

The Kindle is a new "toy" and I will have to use if a bit more before I can say whether I enjoy it better than reading a real book. Time will tell.

I have a small percentage of my personal library, that I consider "keepers". Little by little, I am bringing the other books to our public library, and donating them. The library has a nice size room where people can find donated books, and purchase them for 50 cents for a paper back, and $1- for a hard back book. The room is manned by volunteers, and the money goes to the library.

My mom reads like a fiend but she doesn't like to drive so she has limited herself to "grocery store" bestsellers for a while. I know the Kindle will give her a much broader selection at a better price.

She really resisted the idea saying "I. Like. Books." but she agreed to give it a try.

I hope she likes it as much as Phoenix likes hers!
1 Reply
1
Reply Fri 17 Dec, 2010 09:36 am
@boomerang,
Sorry, its just a generational thing. We are old farts who are not quick to take on new ways of doing familiar things. We come up with all sorts of reasons why we love paper books over e-versions.
My students are more malleable and have downloaded several texts from available sources, graphics and all. The ability to search for multiple places where a concept is discussed is much easier in an e-version than in paper. The newer inference searches allow the learner to almost have the book think like a person.

Im sorta half and half. The only thing I find disagreeable is the way that , because I adjust the font sizes, I dont have the ability to skim a page without interacting with the buttons first.
As anyone under 30 and Ill bet youll find it reversed as far as choices.

Its stilll nigh on impossible to get a download of spwcific techy texts, although , through associations, that will be remedied within several years. Our Univesrity is experimenting with text loading via a "cloud" concept
1 Reply
2
Reply Fri 17 Dec, 2010 09:38 am
@Setanta,
Recently a week past maybe two, the NY Times had an article written stating similar. A book is real and there's a flip back feature where there's a sense where a statement or phrase was. I'm fairly decent at this.

Additionally a book has a feeling that can't be denied, the feel that the paper has is far superi or to cheap plastic and the book always has a friendly smell. There's the new bbook smell, the preserved in a bag smell, the closet smell, the dampness of a bathroom smell which can beatitudes become mold if you aren't careful, there's the aged book, the smell of a kitchen book, the basement residnet book and so on. Can't beat the smell and feel.

Similar with me in maps. I have loved maps since I was a child. I loved the maps as they were and then the maps I created (I had a great deal of homework avoidance time). The maps, the atlases were always better than the damned stinking globe (although the globe was openable and was a place that things were hidden). My happiest day in 1970-ish was when the elderly man upstairs died. Alright gruesome nuts, I meant that I inherited his maps. Every last one! I also got a wood medicine chest which I don't still have. A map has an image, and I can figure where in the grid X might be and where G might be. It's far better than the compuuter generated maps which require moving space to space, never having a full viewable image and if I need an earlier image I have to backtrack and wait as a page reappears, with a physical map I can easily find the space.

Sadly the future will be a disaster as there will be no books, no maps, paper will be a thing relegated to history, seen as an oddity which will be read about on crashable computer screens. Then one day electrical powers of all kinds will cease and the mechanical books, letters, maps, musical instruments will cease as well.

A Kindle, A Nook. Materialistic garbage which dunderheads like prancing about with, a symbol of their supposed economic superiority. A paper book always can be had for free, a plastic gadget will always have a fee.

Read a book and it can be given to a friend. If the friend hasn't a Kindle, then what?

When reading a book if irritated, it can be thrown and survives, will a plastic book survive?W
Frustrated with a map? Crumple it, wad it up as a ball, it can be straigthemned a mechanical map can't be.


There's a place for the mechanical stuff, it's just that the basics are being abandoned and the skills which created the basics are being obliterated and forgotten. 30, 50 years hence will there be anybody that can still run a printing press? A standard press without computers measuring ink and deciding pressure?
ot

As always I have no idea who wrote the above or why they used my name.
1 Reply
1
Reply Fri 17 Dec, 2010 09:59 am
@Sturgis,
Hand copied illuminated texts were far superior to that goddam Gutenberg thingus. Wipper snappers.
0 Replies
1
Reply Fri 17 Dec, 2010 10:14 am
Can you read a kindle in bed? I only read books laying in bed.
I've never seen a kindle either, so I don't know if it'd be like laying in bed and holding up a laptop or what.
I read magazines and newspapers in waiting rooms and that's the only place I sit up to read. Even in the car, if we're on a long trip and I'm not driving, I lay down in the back seat to read.
The only place I've ever sat up to read a book is in school.

Probably stems from when I was a little girl and wanted to read half the night instead of going to sleep.

So, for me - actual books would be my first choice. Libraries are one of my favorite places in the world - if I hadn't been a teacher - I think I'd have become a librarian.
I also like the way illustrations on porous paper look different than photographs and illustrations on a screen - so if I were looking at a book with illustrations - I'd rather look at the actual book with the colors of the illustrations mellowed by having been imprinted on paper.

And I am not cluttering up my life with more books.

If i had more money and more space I would continue my love affair with actual books.

Can you read a kindle in bed?

Hell yes...it's a fraction the size and weight of a laptop...and much thinner.

You need a decent light though...I nearly went nutso last week I worked in the outback because my steenking bedroom light (a weak centre of the ceiling one) didn't give me enough light to read unless I had the print size turned way up.

Mine is next generation, and smaller than the one in the photo: 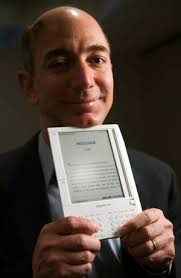 This is mine...it's really light:

Still love books, though...good well-crafted ones...with lovely print.
0 Replies
1
Reply Fri 17 Dec, 2010 10:26 am
@aidan,
Sure! Read the plastic gizmO in bed. Just be careful. Fall asleep and that Kindle can fall and hit the floor and that's it, Kaput! A book on the other hand wll survve that fall.
1 Reply
1
Reply Fri 17 Dec, 2010 10:30 am
I still like a real book, but I've recently started reading some books on my ipod touch

some books lend themselves nicely to audio as well, the Harry potter sreries read by stephen fry was one
1 Reply
1
Reply Fri 17 Dec, 2010 10:31 am
I bought a sony ereader for my daughter this xmas. I'm hoping that she'll like it. She collects books but I thought, that if possible, she could download some of her University texts or assigned reading. It's better than having to carry a backpack full of books. I've never used one, but I like the concept.
0 Replies
1
Reply Fri 17 Dec, 2010 10:34 am
@Sturgis,
Sturgis wrote:

Sure! Read the plastic gizmO in bed. Just be careful. Fall asleep and that Kindle can fall and hit the floor and that's it, Kaput! A book on the other hand wll survve that fall.


Nope...not in my experience. They seem quite tough.

Obviously not as tough as the average book...but they seem to deal with falls like those out of bed ok.
1 Reply
1
Reply Fri 17 Dec, 2010 10:36 am
@dlowan,
maybe sturgis should sleep on the bottom bunk